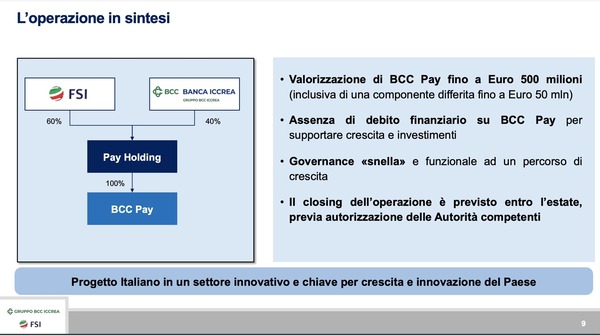 FSI, a find that Maurizio Tamagnini heads, announced the acquisition of a 60% stake of BCC Pay, the epayments units of Iccrea Banca (see here a previous post by BeBeez). The transaction is worth 500 million euros (the buyer will pay 50 million at a later stage).

In 2021, Italian m&a transactions were 1.165 for a total value of 98 billion euros (44 billion in 2020 and 52 billion in 2019), said a report of Kpmg that AIFI, the Italian association of private equity and venture capital investors, shared during an online event about the market trends for 2022 (See here a previous post by BeBeez).

FVS, an investment vehicle of the Veneto Region, started the operative stage of the midmarket private equity Sviluppo Pmi 2 for supporting the local SMEs (See here a previous post by BeBeez). Sviluppo PMI 2 has resources of 60 million euros and aims to raise a total of 75 million by the end of 1H22. The vehicle attracted the resources of Fondo Pensione Solidarietà Veneto, Civibank, local industrial associations, Banca Ifis, Fondo Pensione delle Banche di Credito Cooperativo, co-operative banks that are part of Gruppo Cassa Centrale (6) and Gruppo Iccrea (7), Medio Credito Trentino, Neafidi, and two undisclosed investment holdings. Sviluppo PMI will invest up to 10 million in each deal for minority stakes.

Italian private equity Aksìa Group raised 275 million euros, above the 250 million hard cap (See here a previous post by BeBeez). Aksìa hired Elm Capital as exclusive global placement agent. Marco Rayneri and Nicola Emanuele founded Aksìa in 1997.Since then, the fund carried on 50 investments in Italy and abroad and invested more than 500 million. Aksìa Group is one of the investors that BeBeez Private Data, the Database that BeBeez developed with FSI, monitors (find out how to subscribe for only 110 euros a month)

Amundi launched Eltif Private Investment Capital Opportunity (Epico), a product that Unicredit will distribute (see here a previous post by BeBeez). Epico has a life cycle of 7 years and investors can buy class A subscriptions for 11,000 Euros and class E for 0.1 million. The fund will invest in equity, quasi-equity and debt of unlisted companies. Neuberger Berman will manage the private equity investments while Amundi Private Equity Funds will handle listed and unlisted debt instruments.

Carlo Calabria (the founder of Cmc Capital), Franco Bernabè and Manfredi Lefebvre are working on the launch of Sustainable Ventures, a Spac that will focus on providers of solutions for the environmental transition that aims to raise 200 million euros (See here a previous post by BeBeez). The Spac could list by March and already attracted the informal commitment of Intesa Sanpaolo, UnipolSai and Camfin. Sustainable Ventures appointed as directors Fabrizio Palenzona and Fabrizio Palermo. See here the Insight View di BeBeez about the Spacs available for the subscribers to BeBeez News Premium and BeBeez Private Data, the Database that BeBeez developed with FSI.

Italian fashion brand Chiara Ferragni Collection aims to sell a 66% stake to a private equity fund (see here a previous post by BeBeez). The asset belongs to Chiara Ferragni (32.5%), Paolo Barletta (40%), Nicola Bulgari (13.75%), and Esuriens (a vehichle of the Barindelli and Morgese Families – 13.75%). Bnp Paribas is reportedly advising the vendors that aim to sell the majority of the business through the launch of a capital increase. Chiara Ferragni Collection has sales of 26 million euros (4.6 million from the royalties).

Private equity 21 Invest France sold LV Overseas, a French custom broker, to MML Capital Partners and Bpifrance on the ground of an enterprise value of 220 million euros (see here a previous post by BeBeez). Th vendor 21 Invest acquired a controlling stake of the business in 2019.

DGS, an Italian cybersecurity firm that belongs to Hig Capital, acquired Italian competitor Sarce (see here a previous post by BeBeez). Sarce has sales of 13.4 million euros, an ebitda of 1.34 million and net cash of 6.7 million. Edoardo Rampini is the chairman of Sarce while Raffaele Legnani heads Milan bureau of Hig Capital, which is one of the investors that BeBeez Private Data, the Database that BeBeez developed with FSI, monitors (find out how to subscribe for only 110 euros a month)

Simest (part of Cdp) invested 10 million euros for acquiring a 49% of dairy company Granarolo USA, the subsidiary of Italy’s Granarolo, through the subscription of a capital increase (See here a previous post by BeBeez). Simest invested the resources of its venture capital fund. Sources said to BeBeez that Granarolo USA launched a 20.5 million capital increase and that Granarolo subscribed the remaining part. Granarolo Usa aims to acquire Calabro Cheese, an US-based cheese producer that has revenues of 25 million US Dollars. Granarolo belongs to Granlatte (77.48%), Intesa SanPaolo (19.78%) and Cooperlat (2.74%). The company has sales of 1.28 billion euros, an ebitda of 93.6 million and a net debt of 73.2 million. Simest also invested 15 million in the subscription of a capital increase that Swiss Stahl Gerlafingen, a subsidiary of Italian steel company Afv Beltrame, launched (See here a previous post by BeBeez). Sources said to BeBeez that Simest acquired 16.5% of Stahl Gerlafingen.

Civitanavi Systems, a provider of systems for navigation and inertial stabilisation, aims to list on Milan market (see here a previous post by BeBeez). On 14 February, Monday, the company will place 9.7 million shares (7.2 million of new issuance and 2.5 million that Civitanavi Systems will sell). The company will provide investors with a greenshoe option for acquiring up to 1.455 million shares (15% of the placement). The company will price the shares at 4 – 5.20 euros for a market cap of up to 37.4 million euros on the ground of a pre-money value of 100 – 130 million and a market capitalization of up to 167.4 million and a public listed equity of 34.6%. Civitanavi has revenues of 14.4 million, an ebitda of 4.3 million and net cash of 1.5 million. The company will invest the listing proceeds in its organic development.

NYSE-listed Italian fashion firm Ermenegildo Zegna expects 2021 revenues to be of 1.3 billion euros (+27% yoy) and an adjusted ebit margin of 10% (see here a previous post by BeBeez). On 1 February, Tuesday, Zegna shares closed at 10.39 US Dollars.  The company had listed on NYSE last December after the business combination with a Spac promoted by private equity firm Investindustrial, founded by Andrea Bonomi.

Namirial, an Italian software house that belongs to Ambienta since 2020, acquired Spanish competitor Evicertia from founder and ceo Jacobo van Leeuwen (see here a previous post by BeBeez). Blackstone Credit financed the transaction. Massimiliano Pellegrini is the ceo of Namirial who sold a 70% to Ambienta on the ground of an enterprise value of 150 million euros or little above 10X ebitda. Namirial has revenues of 70 million. Ambienta is one of the investors that BeBeez Private Data, the Database that BeBeez developed with FSI, monitors (find out how to subscribe for only 110 euros a month)

Metrika acquired the majority of Proterm, an Italian thermal treatment of metals company from the Accorsi and Cullati Families, who will keep a minority together with a few financial investors (see here a previous post by BeBeez). Partners Marco Giuseppini and Nicola Pietralunga head Metrika. BPER financed the transaction. Proterm has sales of above 40 million euros and may carry on acquisitions.

GMM (Gravellona Macchine Marmo), an Italian producer of machines for marble milling and polishing that belongs to Consilium, acquired the majority of Bavelloni, an Italian producer of machines for glass edging and bevelling from the management who both the firm in 2015 (see here a previous post by BeBeez). Bavelloni has sales of 22.7 million euros, operative losses of 0.585 million and net debt of 4.7 million. After such an acquisition, GMM has revenues of above 100 million with an ebitda in the region of 10 million. In 2018, GMM acquired Australian competitor Techni Waterjet Ltd (Twj). In 2016, Consilium purchased 75% of GMM from the founders Giovanni Lagostina, Luigi Guazzoni and Corradino Franzi who kept a 25% of the business.

Ardian prepares auction for Neopharmed Gentili. It’s a deal worth about one billion euros