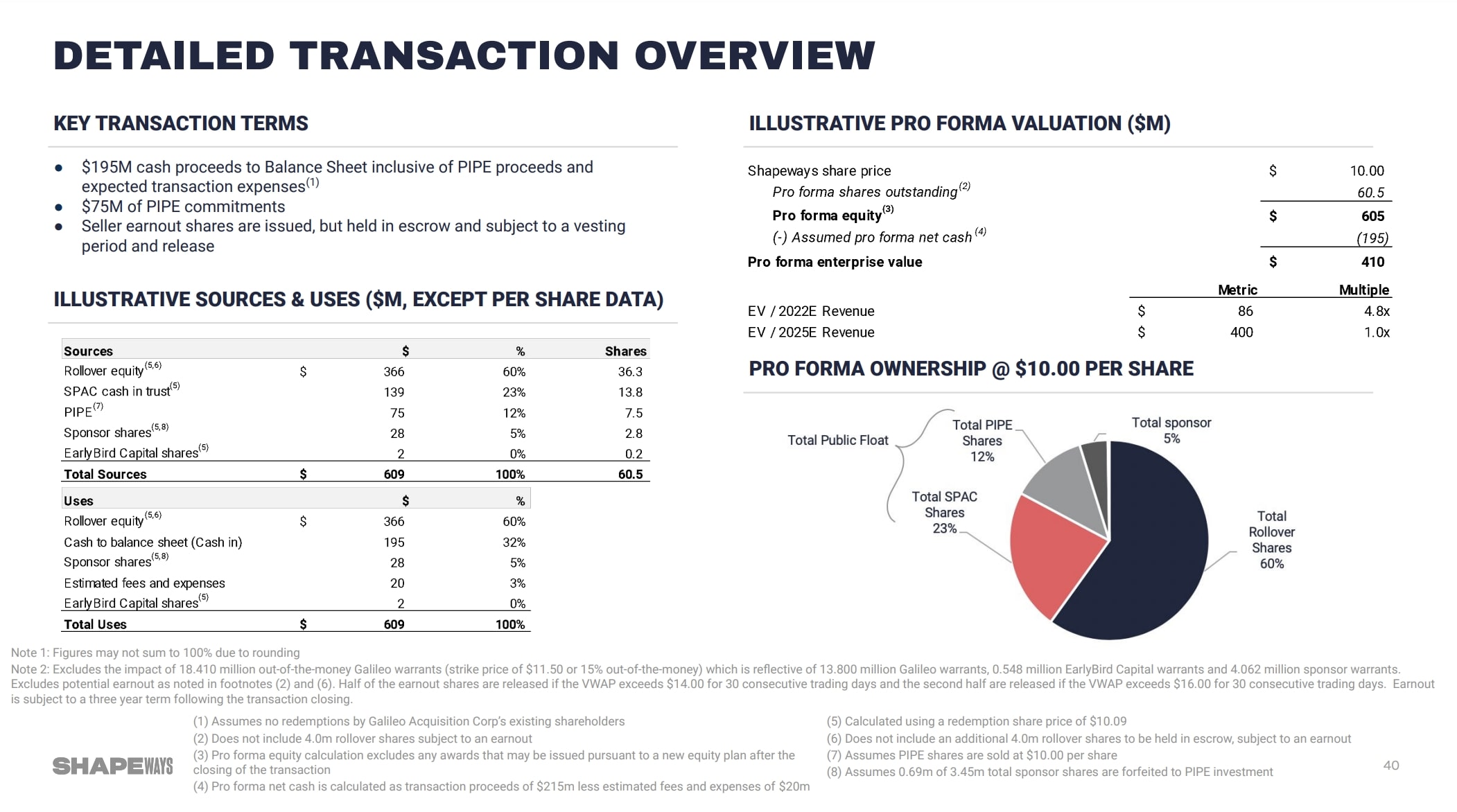 NYSE Spac Galileo Acquisition Corp, a vehicle that Luca Giacometti, Alberto Recchi and Alberto Pontonio launched and of which Magnetar Capital owns a minority, will carry on a business combination with Shapeways, an US-based provider of 3D printing services (see here a previous post by BeBeez). At the end of 2019, Galileo had raised 138 million US Dollars (including 18 millions of the over-allotment). Shapeways’ enterprise value amounts to 410 million. In November 2020, Galileo reportedly failed to implement a business combination with Elite Model World, an international fashion models agency. Shapeways will attract resources of up to 195 million. Further to Galileo’s money, Miller Value Partners, XN and Desktop Metal committed to signing a PIPE (private investment in public equity) contract for pouring 75 million dollars in the business. Once completed the business combination, Galileo and the PIPE subscribers will own 28% and 12% of Shareways. Giacometti, Recchi and Pontonio will hold 5% of Shapeways with a 6-month lockup.

On 29 April, Thursday, Jean-Pierre Mustier, Diego De Giorgi, Tikehau Capital, and Financière Agache, the holding of Groupe Arnault, listed their Spac Pegasus Europe on Euronext Amsterdam (See here a previous post by BeBeez). Pegasus Europe raised 500 million euros. The sponsors committed for more than 165 millions, this amount includes an unconditional forward purchase agreement of 100 million that will be available once implemented the business combination. Pegasus’ shares will price at 10 euros each.

The placement of the shares of Seco, the soon-to-be listed Italian IT company that belongs to Fondo Italiano d’Investimento (FII), started on 23 April, Friday and will end today 30 April  (see here a previous post by BeBeez). The company will place 37.7 million shares (27 million of new issuance). Daniele Conti, Luciano Secciani and their families will sell 10.7 million shares. Seco’s equity value before the capital increase is 264.6 – 332.8 million euros (3.30 – 4-15 euros per share for a market capitalization of 353.7 – 444.8 million). In 2019, Seco acquired the majority of China’s Fannal Electronics, while in July 2020, it purchased 70% of Ispirata and 70% of Hopenly. Seco has sales of 76.1 million, an adjusted ebitda of 15.9 million and an adjusted net financial debt of  11.4 million which includes 4.9 million spent in acquisition.

Banca Finint tabled a binding bid for acquiring Banca Consulia, which belongs to its managers and to Magnetar Capital (see here a previous post by BeBeez). In December 2020, Milan-listed Banca Intermobiliare (BIM) unsuccessfully tried to acquire Banca Consulia. In June 2017, Magnetar and the managers raised their stake in Banca Consulia to 83.82% after it paid 13.5 million euros to Veneto Banca for 25.52% of the asset.

Italian football clubs Inter Milan and Juventus opposed to the plan of Lega Calcio Serie A’s chairman Paolo Dal Pino to sell to CVC – Advent – FSI a 10% of a media company with the matches tv rights for 1.7 billion euros as they wanted to join the European Superleague’s project which then fell apart (see here a previous post by BeBeez). On 24 April, Saturday, eleven of the twenty clubs of Lega Serie A (Roma, Torino, Bologna, Parma, Genoa, Cagliari, Sampdoria, Sassuolo, Spezia, Benevento, and Crotone) asked Mr. Dal Pino to call a meeting for eventually deciding whether to sanction Juventus, Inter Milan, and AC Milan and their executives which have not yet formally left the Superleague.  In the meantime FC Inter’s chairman Steven Zhang has come to Italy in order to finalized a 250 million euros financing with private credit funds.

ION, GIC and FSI are asked to sweeten their 9.5 euros per share offer on Milan-listed Cerved (see here a previous post by BeBeez). Hedge funds like Amber Capital, Boussard & Gavaudan Partners, PSquared Asset Management, and Tiedemann increased their holding in Cerved. Sinclair Capital, which owns 1% of the target, will not tender its shares as the offer price is too low, Massimo Stabilini, the founder of the fund, previously said. On 20 April, Tuesday, JPMorgan down-weighted its stake in Cerved from 5.169% to 3.874%  and sold its equity swap contracts that could mean a 0.02% holding. On 19 April, Monday, Morgan Stanley down-weighted its holding from 6.371% (of which 5.76% comes from equity swap contracts) to 6.351% (5.324% in equity swap). Cerved has sales of 480 million euros, an adjusted ebitda of 202 million and net financial debt of 588 million.

Rumours say that Italian supermarket chain Esselunga attracted the interest of Amazon (see here a previous post by BeBeez). However, the Caprotti family firmly denied any interest in selling the asset they own. Esselunga previously attracted the interest of NYSE-listed Wal-Mart, CVC, Blackstone, and Qatar’s Sovereign Fund. Giuliana Albera Caprotti and her daughter Marina Caprotti own Esselunga which has sales of 8.4 billion, an ebitda of 718.2 million and net debts of 229 million.

On 23 April, Friday, Milan-listed aerospace and defence group Leonardo announced the acquisition of a 25.1% stake in Frankfurt-listed competitor Hensoldt from KKR for 606 million euros (23 euros per share) (See here a previous post by BeBeez). Leonardo beaten the bids of French Thales, Spanish Indra and Sweden’s Saab. Leonardo and Kreditanstalt für Wiederaufbau (KfW) will hold an even stake in Hesoldt. FfW paid 464 million for its stake in Hensoldt which launched an IPO in 202 at 12 euros per share. KKR acquired the asset from Airbus in 2016 and kept a 60% stake after the listing.

On 23 April, Friday, the troubled Milan-listed engineering group Trevi Finanziaria Industriale (Trevifin) (whose controlling shareholders are FSI Investimenti and Polaris Capital Management), updated the targets of its business plan 2021-2024 (see here a previous post by BeBeez). In 2021, the company expects to generate sales of 525 million euros, an ebitda of 54 million. In 2024, Trevifin aims to generate sales of 680 million with an ebitda of 96 million.

Costruzione Emiliana Ingranaggi (Cei), an industrial company that belongs to automotive holding company Spare Partners, a portfolio asset of Alto Partners, acquired Italian competitor Le.Ma from the ceo Giordano Zauli and the Poci Family (See here a previous post by BeBeez). The vendors reinvested for a minority while Zauli kept his ceo role for Le.ma and joined the board of Cei. Banco BPM and Intesa Sanpaolo financed the transaction. Le.ma has sales of 22.7 million euros, an ebitda of 2.8 million and net cash of 1.46 million.

Clessidra Private Equity  announced the acquisition of the majority of Mondodelvino, an Italian wine producer, from the Martini Family who founded the company in 1991 together with Roger Gabb and Christoph Mack (see here a previous post by BeBeez). Mondodelvino has sales of 111.1 million euros with an ebitda of 8.2 million.

Impresoft, the technological pole of Xenon Private Equity born in November 2019 out of the merger of 4ward, Brainware, Gruppo Formula, Impresoft, and Qualitas Informatica acquired OpenSymbol and NextCrm (see here a previous post by BeBeez). The management of OpenSymbol and of NextCrm invested in Impresoft. OpenSymbol has sales of 6.63 million euros, an ebitda of 1.2 million and net cash of one million. Once completed such acquisitions, Impresoft will have sales of above 70 million.

Metrika, the private equity fund that Marco Giuseppini and Nicola Pietralunga head, acquired the majority of Robor, a producer of industrial machinery with the financial support of Credit Agricole Friuladria and Intesa Sanpaolo (See here a previous post by BeBeez). Simone Borsato (ceo) and his Family will keep a minority of the company that aims to consolidate its presence in China, Russia and North America. Borsato has sales of 27 million euros, an ebitda of 6.25 million and net cash of 13.4 million.

Portals, a UK-based supplier of banknotes and security papers, signed an agreement for acquiring the security business of Fedrigoni, an Italian producer of special paper of which Bain Capital owns a controlling stake (See here a previous post by BeBeez). Fedrigoni has sales of 1.171,4 billion euros and an adjusted ebitda of 162.7 million.