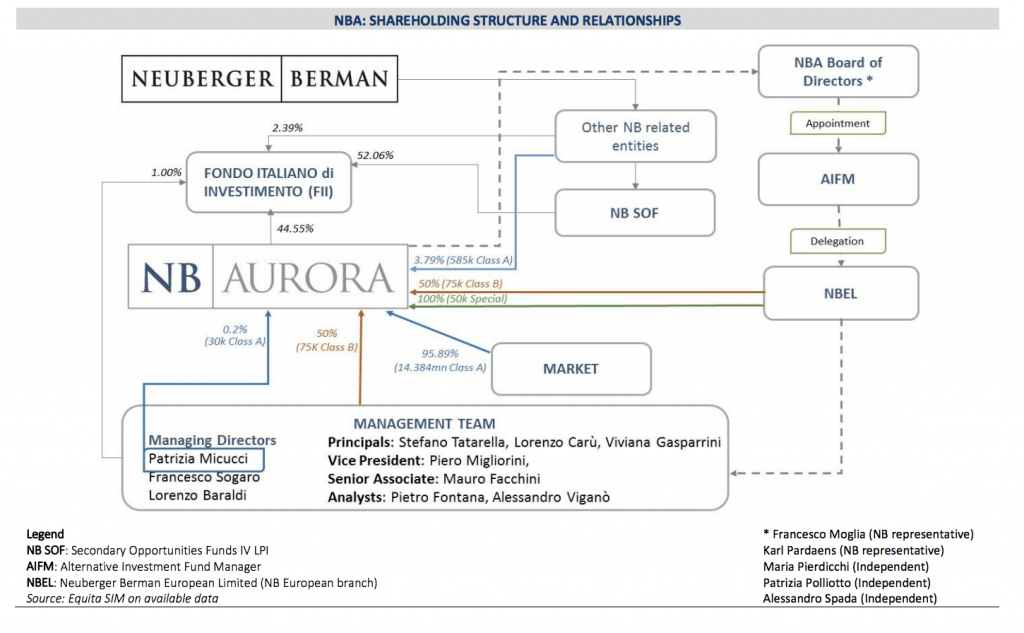 UBI Banca rated Milan-listed private equity NB Aurora (NBA) as a Buy with a target price of 10.5 euros (see here aprevious post by BeBeez). NBA shares are currently trading at 8.24 euros, for a total market capitalisation of 123.6 million, which means a 40% discount on the fund’s NAV. According to UBI’s analysts, the current stock price is not valuing fairly the company’s portfolio that is worth 126.5 million.

UBI report says that NBA’s stake in Forgital, a producer of forged and laminated rolled rings for industrial use, is worth almost a half of the current private equity fund’s market capitalisation. UBI also says that Forgital enterprise value is of 922 million. The company is reportedly considering a dual track IPO and attracted interest from Carlyle, Blackstone, and CVC.

Another report of Equita sim set a target price of 11.2 euros per shares for NB Aurora (see here a previous post byBeBeez). Equita says that after the sale of Forgital, NB Aurora shares will trade at a 30% discount over the firm’s NAV, while such a ratio for the company’s comparables is in the region of 94.5%.

US private equity OpenGate Capital announced it is about to by Aico, an Italian producer of energy-saving domestic heaters, from Italian financial investor  Ambienta (See here a previous post by BeBeez). OpenGate will add-on the target to its portfolio asset Gruppo Jøtul, a Norwegian producer of domestic heaters. Fabien Marcantetti, a Paris-based managing director of the US firm, is conducting the transaction. Ambienta acquired 60% of Aico from the Ravelli Family in December 2010, while in June 2016 acquired 100% of the company.

Oltre Venture invested 2 million euros in a convertible bond issued by Evolvere, a renewable energy company that develops smart home and smart grid services (see here a previous post by BeBeez). Michele Cappone is the chairman of the company that has revenues of 27.5 million, an ebitda of 12.9 million, and net financial debts of 70 million. Luciano Balbo is the chairman and founder of Oltre Venture. Evolvere started an intense activity of corporate venture capital together with Italian Universities, industry peers, and incubators for developing products for the sectors of IoT, data science, and blockchain. Oltre Venture closed 16 investments with its 37 million second fund launched in June 2016.

Comelz, a producer of machinery for the tannery industry in which NB Renaissance Partners holds 80%, acquired Italian competitor Camoga from the Mascetti Family (see here a previous post by BeBeez). Vendors will keep a management role in the group. Andrea Mascetti is the ceo of Camoga, which has sales of 12 million euros (+15% from 2016). After this acquisition, Comelz, whose ceo is Alex Corsico, expects to generate sales of 75 million and an ebitda in the region of 30 million.

Seer Capital Management will group under MCE Locam all its Italian activities for consumer credit and NPLs after having subscribed a capital increase of Mediocredito Europeo (MCE)  (see here a previous post by BeBeez).  Seer’s portfolio company Locam will hand its NPLs and servicing activities to MCE, which on the other hand will issue new shares for Locam, that will hold 33% of MCE. Alessandro Maione is the ceo of Locam. Locam owns a portfolio of NPLs with a gross value of 1.8 billion euros.