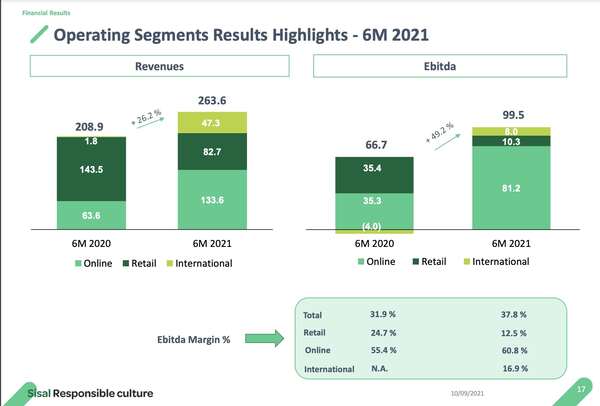 After rumors recurring in the past few weeks (see here a previous by BeBeez), official confirmation arrived last October 12th about  Italy’s gaming company Sisal spa starting the process for its listing on the Italian Stock Exchange (see here a previous by BeBeez). In detail, the gaming group controlled by CVC Capital Partners submitted to Borsa Italiana the application for admission to listing on the MTA (which will be called, starting from 25 October 2021, Euronext Milan) and requested Consob for authorization to publication of the Information Prospectus. We recall that Sisal group was acquired by CVC in 2016 for one billion euros (see here a previous by BeBeez).  At that time sellers were funds managed by Apax (36.5%), Permira (36.5%) and Clessidra (20%), which in turn had been controlling Sisal since 2006. This year Sisal Group’s gaming and payments activities are going to be separated as at the end of last July a corporate reorganization project was approved providing for the demerger of Sisal Group in favor of the newco SG2 spa to which the activities relating to the payment services sector headed by Mooney Group spa will be contributed in the next few weeks. As for Mooney (fka SisalPay | 5), this company too is said to have hired advisors (Morgan Stanley, Goldman Sachs and Intesa Sanpaolo-Banca Imi) for listing in 2022 (see here a previous post by BeBeez). CVC Capital Partners (70%) and Intesa Sanpaolo (30%) are the owners of Mooney.

Intercos, an Italian cosmetics producer that belongs to Dario Ferrari, L-Catterton, Ontario Teachers Pension Plan and GIC, will launch an ipo on Milan market by the end of October (see here a previous post by BeBeez). GIC acquired 9% of the business in 2020. L-Catterton owns a 35% stake since 2014 while Ontario Teachers Pension Plan purchased a 20% in 2017. Intercos will list through the launch of a capital increase of 60 million and the sale of shares of the financial investors. Ferrari (44% owner) will keep a controlling stake and the majority of voting rights. BNP Paribas, Morgan Stanley, UBS, Jefferies, Rothschild, and Cornelli Gabelli e Associati have different advisory roles for the listint. Intercos has sales of 606.5 million euros, an ebitda of 86.95 million with a net financial debt of 194 millions.

Gianluca Vialli and Fausto Zanetton, the owners of British crowdfunding platform Tifosy,  launched the Cayman Islands-based Spac Iconic Sports Acquisition for raising 250 million US Dollars through the sale of shares at 10 US Dollars each (See here a previous post by BeBeez). The spac will target a business in the sectors of sport, data analysis, media and technology. Investors will get half a warrant for each share and may exercise it at 11.50 US Dollars. The sponsors’ 6.25 million Class B shares may give the Spac a market capitalization of 313 million. Further sponsors of Iconic Sports Acquisition are Jimmy Dinan, Edward Eisler and Alexander Knaster.

Carlyle is selling Comdata, a BPO firm that earlier in June restructured its debt through a 40% conversion in equity as BeBeez previously reported (see here a previous post by BeBeez). Bnp Paribas, CQS, Investcorp, GSO, CA CIB, and Société Générale are some of the company’s lenders. Moody’s assigned a Caa3 rating for Comdata, its credit lines (510 million euros term loan B maturing in 2024 and 85 million for a revolving senior secured facility maturing in 2023) and the abs notes that Comway SPV issued. On 30 August, Monday, Moody’s upgraded Comdata’s rating to Caa1 after the debt restructuring.

On 1 October, Friday, at the end ot its takeover bid, Spanish infrastructures investor Asterion Industrial Partners reached a 94.995% stake in Milan-listed Retelit (see here a previous post by BeBeez). The shareholder who didn’t join the tender must sell their holdings. In 1H21, Retelit posted sales of 84 million euros, an ebitda of 24.1 million, net profits of 1.4 million, and net financial debts of 146.5 million.

Italy’s luxuy yachts producer Ferretti, a subsidiary of Chinese Weichai, aims to list on Hong Kong market (see here a previous post by BeBeez). In 2019, Ferretti dropped its ipo plans on Milan market for the volatility of the company’s value. In 1H21, the company posted sales of 457 million euros with an ebitda of 53 million di euro and net profits of 23 million.

Lucca Court may hod a third auction on the ground of a starting ask price of below 50 million euros for Perini Navi (see here a previous post by BeBeez). Earlier in July, Ferretti and Sanlorenzo withdrew their interest for the company as they considered too high the ask price of 62.50 million. On 30 September, Thursday, a second auction with an ask price of 56.25 million didn’t attract any offer.

Nasdaq-listed investment firm Colliers acquired the majority of Antirion sgr, an Italian real estate investor with assets under management worth  more than 3.8 billion euros (see here a previous post by BeBeez). Ofer Arbib, the target’s founder and ceo, will keep his operative role together with its team.

RINA, a provider of services for several industrial sectors that belongs to VEI Capital, VS&L and NB Renaissance, acquired 51% of Cyber Partners, a cyber security provider for the financial sector, from the founders Paolo Alberto Flammini and Paolo Capozucca (see here a previous post by BeBeez). Rina recently acquired Logimatic Solutions, a Danish software house that has sales in the region of 6 million euros. Cyber Partners has sales of 2.5 million. Ugo Salerno, the ceo of Rina, is reportedly interested in listing the company that in 1H21 posted sales of 258 million. RINA’s 70% belongs to Registro Navale Italiano. The management has 3%, while Vei Capital, Venice Shipping & Logistics and NB Renaissance own 27%.

Sources said to BeBeez that Gruppo Flavourart, an Italian producer of liquid aromas, hired CP Advisors for finding a financial investor (see here a previous post by BeBeez). FlavourArt is owned by Massimiliano Mancini e Anna Facchino who in January 2020 sold a 25% to investment holding Capex, part of CP Advisors. FlavourArt has sales of 13 million euros with an ebitda of 5,3 million or a 40% margin. In 2021, the company expects to generate a turnver of 15 million with a 6 million ebitda.

Banco delle Tre Venezie (BTV) completed its merger with Italy’s credit servicer Cherry 106 (see here a previous post by BeBeez). BeBeez previously reported that Cherry’s ceo Giovanni Bossi and the other company’s shareholder were holding talks for acquiring 51% of BTV. Bossi will own 40.7% of the target and will be the ceo of the merged entity.

Italmobiliare raised to 100% its stake in Officina Profumo Farmaceutica di Santa Maria Novella after having invested 40 million euros for a 20% of the business that belonged to Diana Stefani and Eugenio Alphandery (see here a previous post by BeBeez). In January 2020, Italmobiliare paid 40 million for a  first 20% of the company and raised its stake to 80% in August after an investment of 120 million on the ground of an equity value of 200 million. The fund will boost the international expansion of the company.

Seco, a Milan-listed producer of microcomputers, of which Fondo Italiano d’Investimento sgr  ownes a stake, acquired Garz & Fricke Group (GFG), a German developer of hardware and software for the Industrial Internet of Things from Afinum Management (see here a previous post by BeBeez). The aggregated companies will have a turnover of above 180 million euros with an ebitda of 40 million. GFG’s enterprise value amounts to 180 million or 11.2X EV/ebitda. Seco paid 165 million in cash and 15 million with new shares. Afinum will have 2.3% of Seco.

Nutkao, an Italian producer of chocolate and semifinished items for the production of sweets that belongs to White Bridge Investments, acquired Antichi Sapori dell’Etna, Italy’s producer of pistachios that hired Vitale&Co as financial advisor (see here a previous post by BeBeez). The asset attracted the interest of Hyle Capital, Oaktree and Equinox. Antichi Sapori dell’Etna has sales of above 55 million euros, an ebitda of 6.6 million and a net financial debt of 12.1 million.

Arabella Caporello, the former coo of Milan Municipality, is a new partner of L Catterton Europe (see here a previous post by BeBeez). While working for the Municipality, Caporello has been one of the speakers for the event that AIEC (Italian Association for Equity Crowdfunding) held in 2017 together with EdiBeez, the publisher of BeBeez. Caporello also worked as independent non-executive director of Credito Fondiario and GVS.

F&P4BIZ, a financial company that Guglielmo Fiocchi and Maurizio Perroni founded in 2019, created F&PML e Partners together with Filippo Mantegazza and Andrea Lovato (see here a previous post by BeBeez). F&PML aims to support the investors in UTPs and help the companies that have such debts in implementing restructuring plans.

White Bridge Investments acquired Delta Med, a producer of medical items, from the target’s managers, Augens Capital and DB Private Equity (see here a previous post by BeBeez). The vendors reinvested for a minority. Banco BPM and Credit Agricole financed the transaction. Delta Med sold a controlling stake in 2015 to Augens Capital and DB Private Equity. The company has sales of 20.3 million euros, an ebitda of 2.7 million and a net financial debt of 12 million. White Bridge aims to carry on a buy and build strategy for the company.

French ARaymond acquired Castello Italia, an Italian producer of components for the sectors of automotive and industrial automation, from Arcadia (75%) and Chemical Project Holding (CPH) (25%), an investment holding of Frederic Hepineuze (see here a previous post by BeBeez). CPH sold to Arcadia the majority of Castello in 2018. The fund posted a 40% IRR with this transaction. Arcadia raised 80 million euros between 2017 and 2019 and invested 60% of its resources. Castello has sales of 30 million with an ebitda in the region of 5 million. Pierluigi Testa is the company’s ceo.

Easytech, an Italian developer of IT infrastructures, acquired the software house Skianet from the ceo and founder Cristian Iobbi (see here a previous post by BeBeez). The target has sales of 0.911 million euros with an ebitda of 0.24 million and net cash of 0.43 million. Earlier in August, Easytech issued a 1.5 million Vienna-listed minibond placed on CrowdBond, part of Opstart. The issuance will mature in five years and pay a fixed rate coupon of 4.5%. The company has sales of 3 million with an ebitda of 0.291 million. Sign up here for BeBeez Newsletter about Private Debt and receive all the last 24 hours updates for the sector.

LBO France sold to TricorBraun the majority of Vetroelite, an Italian supplier of high-end glass packaging (see here a previous post by BeBeez). Daniele Feletto (ceo) and the managers of Vetroelite will keep their roles. LBO France acquired the controlling stake of Vetroelite in 2017 from Gradiente, which purchased the asset in 2013 from Arredo Plast together with the managers Daniele Feletto and Tullio Pivetta. In 2018,  Vetroelite acquired the Italian competitor Valery Glass from Marco Lesinigo. Vetroelite has sales of 33.7 million euros, an ebitda of 8 million and a net financial debt of 11.5 million.