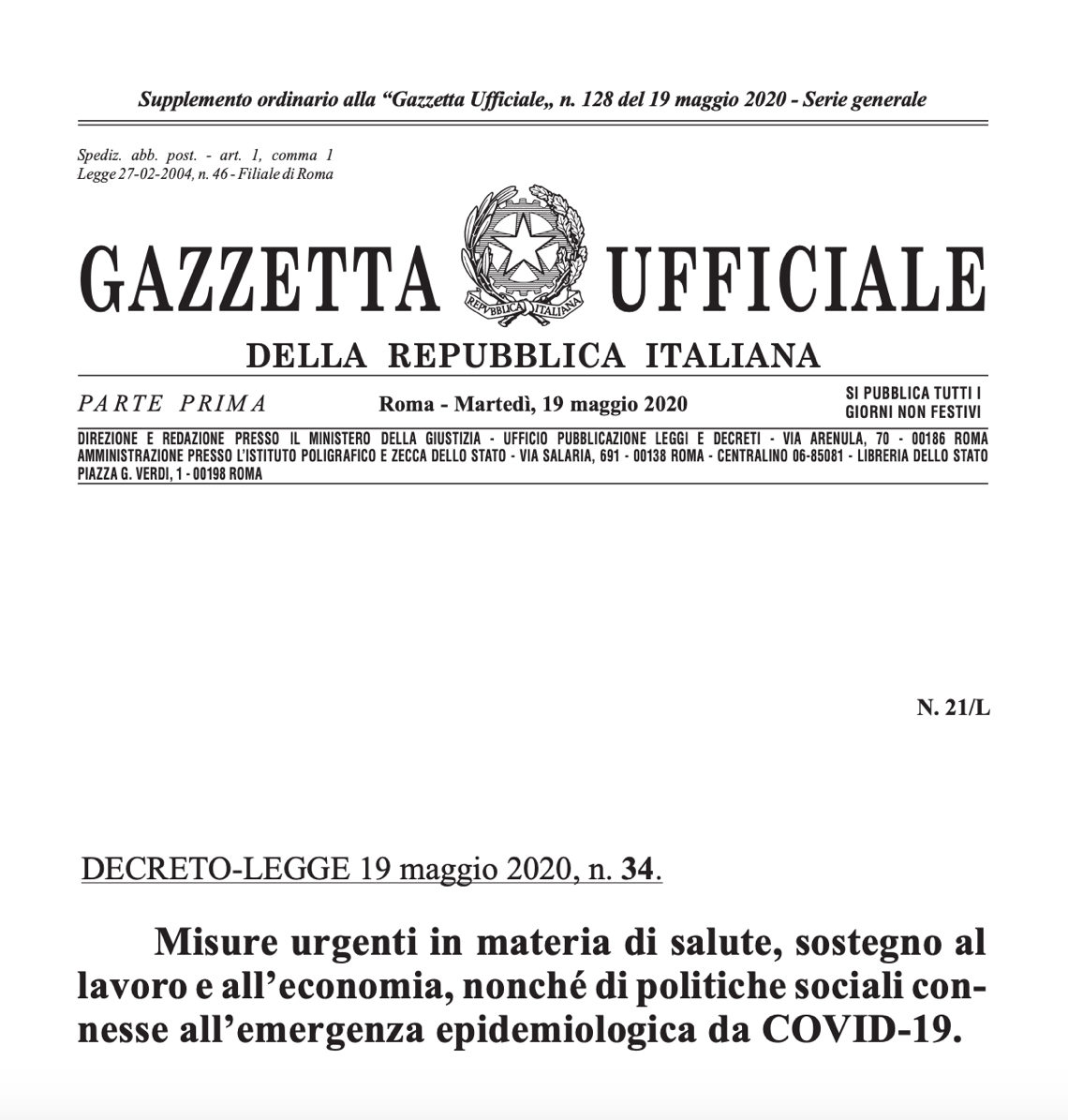 Cdp will support mid and big size companies with sales of 50 million euros and above through the Patrimonio rilancio (PR) that will have an up to 12-years term and resources of more than 50 billion, and Fondo Patrimonio PMI for smaller companies (see here a previous post by BeBeez). The fund will invest in equity or subscribe convertible bonds in Italian companies that operate in all sectors but banking and insurance. The fund attracted resources of banking foundation, insurance companies, and banks. Furthermore, the Italian Government approved generous tax incentives for investing in the equity and debt of SMEs through investment funds and Eltifs (see here a previous post by BeBeez). However, Anna Gervasoni, the general manager of AIFI, the Italian association of investors in private equity, venture capital and private debt expressed her concern for such initiatives of the Government (see here a previous post by BeBeez). Speaking on the sidelines of Milano Capitali event, for which BeBeez acted as the media partner, Gervasoni also said that an eventual strengthening of the golden power for unlisted companies may freeze the m&a and private equity market. Furthermore, the other private equity directors that attended the event depicted a bearish scenario for the sector in the next six months (see here a previous post by BeBeez). Andrea Bonomi, the managing principal of Investindustrial, said that the Covid-19 emergency made the perfect storm, therefore funds will focus on their portfolio assets instead of new deals. Maurizio Tamagnini, ceo of FSI, Marco De Benedetti, managing director and co-head of Carlyle‘s European Buyout Group, and Roberto Italia, one of the founders of Space Capital Club, agreed with Bonomi. Italia also announced that private equity Verlinvest, (whose sponsors are the families Les Spoelberch and Méviuon) appointed him as ceo. Gianni Tamburi, the founder of Milan-listed Tamburi Investment Partners, said that he aims to invest in post-restructuring, with the idea of supporting the relaunch of businesses that completed their turnaround.

Mediobanca  Private Banking is ready to launch its third programme of investiment in funds of funds of private asset for its private banking clients (See here a previous post by BeBeez). The bank previously launched two funds of this kind with 250 million US Dollars of resources that Russell Investments is managing. Mediobanca Private Banking head Angelo Viganò announced the launch of the initiative on 14 May, Thursday, on the sidelines of Milano Capitali, an event for which BeBeez acted as media partner.

Ardian Infrastructure and Canson Capital Partners are in exclusive talks for acquiring a minority of Inwit (Infrastrutture Wireless Italiane), the Milan-listed owner of telecom towers of which TIM  and Vodafone are the controlling shareholders (see here a previous post by BeBeez). At the closure of trading of 18 May, Monday, Inwit had a market capitalization of 5.78 billion euros. On 23 April 2020, Tim and Vodafone sold a 4.3% of Inwit each and gained 400 million after having diluted their stake to 33.2%. The asset also attracted the interest of F2i, KKR, and Advent International. Separately, Tim is holding talks with KKR for selling 40% of its infrastructure network.

Veneto Sviluppo, the financial firm of the Veneto Region, launched Fondo Sviluppo Pmi 2 (FSP), a private equity fund, and Fondo Veneto Minibond 2.0 (FVMB), a private debt fund (see here a previous post by BeBeez). FVMB raised 48.5 million euros and invested 24.5 million. The fund will subscribe minibonds of Veneto’s SMEs, or companies that have an establishment in the area, in partnership with Bcc of the region. FSP will invest in minorities of SMEs based in Trentino Alto Adige, Veneto, and Friuli Venezia Giulia with tickets of 10 million. FSP has a fundraising target of 75 million, of which 20 million come from Veneto Sviluppo and will invest in ethical manufacturing sectors. Fabrizio Spagna, the chairman of Veneto Sviluppo, said to BeBeez that the firm is going to support the Veneto’s companies that are facing troubles related with the coronavirus lockdown. Veneto Sviluppo is one of the private capital investors that BeBeez Private Data monitors. Find out here how to subscribe to the Combo version that includes BeBeez News Premium.

Shopfully, the Italian owner of the marketplace DoveConviene, acquired PromoQui, an info-commerce company that owns the brands PromoQui and VolatinoFacile. (see here a previous post by BeBeez). The target’s founders Constantin Wiethaus, Milo Zagari, Giulio Valiante, and Ivan De Liguori sold their stakes in the asset. Wiethaus and Zagari will act as vice president of Shopfully. ShopFully now owns three marketplaces (DoveConviene, PromoQui and VolantinoFacile) and the apps CardPlus and DoveFila. Alessandro Palmieri and Stefano Portu founded Shopfully in 2010. In September 2015, the company attracted a 10 million round that Highland Capital Partners Europe subscribed. In December 2014, the company raised 5.2 million from 360 Capital Partners and Merfin Capital Partners. In April 2013, Principia poured 3.5 million in Shopfully. PromoQui has sales of 2 million, an ebitda of 0.375 million and net cash of 0.537 million.

Summer+, an investor in illiquid assets whose heads are Giulio Sapelli (chairman) and Fabio Palumbo (ceo) is launching a capital increase of 8 million euros that three Italian institutional investors will subscribe ahead of a listing on Vienna Stock Market (See here a previous post by BeBeez). However, the company is holding talks for raising further resources from an Italian bank and for signing a co-investment partnership with a pool of investors that may pour up to 64 million in a new fund. Palumbo said to BeBeez that the fund aims to acquire non-core and cash-generating assets from financial services firms and close 3-5 transactions worth 50 million in three years. Further directors of Summer are Gregorio Gitti, Francesca Romana Bazoli, Roberto Tamburrini, Piero Alonzo, Giuseppe Sigillò Massara, Fabio Stupazzini, Nicola Festa, Michele Casciani, and Francesco Falconi.

Italian Food, the owner of sauce brand Petti, hired Mediobanca for seeking a new shareholder (see here a previous post by BeBeez). Earlier in February, the company called off talks for the sale of a Tuscany-based plant to Barilla. Italian Food belongs to the Petti Family and has sales of 60 million euros. Maria Gambardella is the ceo of the company that received two loans through the fintech platform October. One facility in January 2018 for 1.6 million with a 36 months tenure and a borrowing rate of 4.8%, and another in February 2019 for 0.7 million euros with the same terms. The company invested both resources in advertising and marketing campaigns.

CVC Capital Partners will negotiate in exclusive talks for 4 weeks the acquisition of a 10-20% stake of Lega Calcio Serie A (see here a previous post by BeBeez). The equity value is of 11 billion euros. The launch of an infrastructure fund that may invest in the stadia for Italian football clubs is part of the offer of CVC Capital Partners for Lega Calcio (see here a previous post by BeBeez). CVC aims to create with Lega Calcio Serie A a media company that owns the TV Rights fo matches and events. Sources said to BeBeez that CVC is interested is in talks for acquiring a stake in the German Bundesliga, French Ligue 1, England’s Premier League, and Spanish La Liga. Blackstone reportedly offered to Lega Calcio a 100 million financing facility. Market rumours say that Lega Calcio is also of interest to Silverlake, which owns 10% of English iconic football team Manchester United.

In 2019, Betty Blue, the fashion brand of Italian designer Elisabetta Franchi, recorded a turnover of 120.4 million euros (+4.7%), an adjusted ebitda of 23.5 million (+5.2%), a net adjusted profit of 14.7 million (-2.2%), and net cash of 11.3 million (See here a previous post by BeBeez). In 2019, Betty Blue decided to pay dividends for 15 million (+50% yoy). Milan-listed Spac Spactiv is reportedly interested in a business combination with Betty Blue, but suspended talks in March. However, the parties didn’t call off the deal.

Germany’s Voith, a producer of machinery for the tissue paper industry, acquired 90% of Italian competitor Toscotec from Synergo (See here a previous post by BeBeez). The target’s ceo Alessandro Mennucci will keep his role and a 10% of the company. Voith has sales of 4.3 billion euros. Synergo acquired Toscotec in 2016 on the ground of turnover of 100 million, an ebitda of 115.7 million and net cash of 15.7 million. The company has sales of 148.2 million and an ebitda of 14.5 million.

Azimut launched Fondo Infrastrutture per la Crescita – ESG (FIC), a fund for investing in social infrastructures (see here a previous post by BeBeez). Andrea Cornetti, the former coo of Prelios, will head the vehicle that has a fundraising target of 1 billion euros and a tenure of 14 years. The fund will implement an Impact Investing strategy consistent with the macro-categories people, environment, and society of the Sustainable Development Goals Agenda of the United Nations. FIC will invest its resources in schools, student housing, elderly care residences, health care structures, sport and tech infrastructures.

Gioconda, the Italian branch of Lbo France, acquired the majority of Demas, an Italian distributor of veterinary products for pets, from the Foglietti Family (See here a previous post by BeBeez). Banca Ifis and Giovanni Ambrosetti co-invested in the asset, while Banco Bpm, Bper Banca, and Intesa Sanpaolo financed the acquisition. Fabrizio Foglietti will keep his roles of chairman and ceo of Demas that aims to grow through domestic and cross-border M&A. The company has sales of 126 million euros.

Mandarin Capital Partners (MCP) acquired the majority of ABC Morini, a producer of metal components for the leather goods manufacturing (See here a previous post by BeBeez). Monica Morini, the ceo of ABC Morini and daughter of the founder Marcello Morini, will re-invest part of the proceeds in a minority of the company. Cassa Centrale Banca – Credito Cooperativo Italiano financed the transaction. ABC Morini will join Margot, an Italian pole of subsuppliers of components for high-end design companies of which MCP has 70% and Marco Vecellio has 30%. ABC Morini has sales of 8 million euros.

EQT Partners is in advanced talks for acquiring Italian ESCo (Energy Service Company) Bosch Energy and Building Solutions Italy from Bosch Group (See here a previous post by BeBeez). In 2018, Bosch sold Sicam to Stargate Capital as part of the disposal of Beissbarth.

The Targetti family puts villa La Sfacciata up for sale. While studying the sale of logistics assets owned by its real estate company Tre Holding