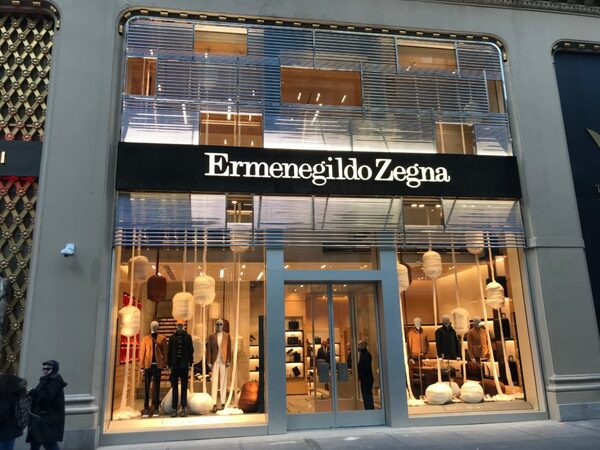 Gruppo Ermenegildo Zegna, an Iconic Italian fashion firm, will list on NYSE through a business combination with Investindustrial Acquisition Corp. (IIAC), a Spac that Investindustrial launched after having raised 402.5 million US Dollars (see here a previous post by BeBeez). Once completed the business combination, the Zegna Family will keep a 62% of the company that will have an enterprise value of 3.2 billion ahead of an expected market capitalization of 2.5 billion. The company will receive fresh resources of 880 million US Dollars (403 million in cash from IIAC, 250 millions from through a Private Investment in Public Equity agreement and 225 million from Investindustrial through a forward purchase agreement). The Zegna Family will fetch 546 million out of the business combination (see here a previous post by BeBeez).

L Catterton Europe acquired 60% of Italian fashion firm Etro from the eponymous family that will keep a 40% stake (see here a previous post by BeBeez). Gerolamo Etro, the founder, will act as chairman. The company’s value amounts to 500 million euros. Etro attracted the interest of Mayhoola. The firm has sales of 283.6 million with an ebitda of 15.7 million.

Investindustrial sold Lifebrain, a diagnostic group that acquired in April 2018, to PSP Investments and Cerba HealthCare, a portfolio asset of EQT (see here a previous post by BeBeez). Lifebrain reportedly attracted the interest of Groupe Inovie, a portfolio company of Ardian. Goldman Sachs and JP Morgan handled the sale of Lifebrain whose turnover amounts to 200 million euros.

On 26 July, Monday, Asterion Industrial Partners will launch its public offer on Milan-listed ICT Retelit ahead of a delisting (see here a previous post by BeBeez). The offer period will close on 10 September, Friday. Asterion will pay 2.85 euros per share. Retelit’s board said that such an offer for 71.252% of the company is fair. Asterion already owns 28.748%, set a threshold of 66.67% and will invest up to 333.57 million euros on the ground of an enterprise value of 607 million or 11.2X ebitda. Retelit has sales of 165.2 million with an ebitda of 54.2 million.

The directors of Cerved, a Milan-listed provider of business information and credit management, declined the public offer of 9.5 euros per share (1.855 billion euros of equity value) that ION Investment Group launched on 8 July together with GIC and FSI  and that started on July 16th (see here a previous post by BeBeez). Cerved is trading at 9.9 euros per share with a market capitalization of 1.93 billion euros. The directors said that the bid does not include the perspective value of Cerved, nor it would allow the current shareholders to benefit from the sale of the subsidiary Cerved Credit Management Group. The offer of ION amounts to an EV/ebitda of 10.5x – 11.1x, while the company’s comparables trade at 18.3x – 20.5x.

Italian insurance Spac Revo, a vehicle that former Cattolica Assicurazioni’s ceo Alberto Minali and  fiancier Claudio Costamagna launched, announced a business combination with Elba Assicurazioni for 160 million euros (see here a previous post by IBeBeez). Revo also announced the acquisition of a 10% stake of Mangrovia Blockchain Solutions, an investment holding and software house that belongs to Angelomario Moratti. Revo will appoint a board member of Mangrovia. The closing is subject to the positive conclusion of Revo’s business combination with Elba Assicurazioni. Revo raised 220 million. Vittoria Assicurazioni, Fondazione Cariverona and Scor Reinsurance Group acted as cornerstone investors. Click here for reading the BeBeez Focus on Spacs available for the subscribers to BeBeez News Premium

Italian packaging company Guala Closures delisted from Milan market as Investindustrial acquired all the company shares and successfully closed its public offer on the target (see here a previous post by BeBeez). Guala Closures already delisted a first time in 2008 following a takeover bid launched by DLJMB Overseas Partners IV, a private equity fund then managed by DLJ Merchant Banking and indirectly controlled by Credit Suisse Group which was renamed aPriori Capital Partners after the spin-off of private equity businesses from Credit Suisse. At that time Intesa Sanpaolo had in turn acquired a stake in the capital of the holding company GCL Holdings sarl. The company then carried on a business combination with Milan Spac Space 4 in August 2018 and so came back on the public market. The company has sales of 572 million euros, an adjusted ebtida of 98 millioni and a net financial debt of 462.5 million.

Comer Industries, an Italian manufacturer of industrial components which listed on the Italian Stock Exchange thanks to a business combination with the Spac Gear 1 inMarch 2019, is holding merger talks with German competitor Walterscheid Powertrain Group (WPG) (see here a previous post by BeBeez). The merged firms will generate sales in the region of 792 million euros with an adjusted ebitda of 86.5 million. Walterscheid Powertrain Group belongs to One Equity Partners since June 2019 and has sales of 396 million. Comer Industries has a turnover of 396.2 million an adjusted ebitda of 50.1 millioni, net profits of 21.8 million and net cash of 26.7 million. Comer will pay a dividend of 0.50 euros per share. Comer will finance the transaction with a swap of shares worth 163 million and 40 million in cash. Waltersheid’s enterprise value is of 9.4X ebitda. After the merger, the Storchi family will own 51.05% of Comer Industries while WPG will hold 28%. Comer will invest its own resources and raise debt for paying the cash portion due to WPG.

Entrepreneur Valerio Gruppioni invested 15 million euros for acquiring back from Neuberger Berman and Milan-listed NB Aurora a 40.3% of Sira Industrie,  an Italian producer of radiators (see here a previous post by BeBeez). In 2011, Fondo Italiano d’Investimento (FII) paid 12 million for the stake in Sira and in 2018 sold its portfolio to Neuberger Berman and NB Aurora. The equity value of Sira Industrie amounts to 37.2 million.

Bluclad and Progold, two manufacturers of components for the luxury industry, are merging with the support of LBO France (see here a previous post by BeBeez). Progold has sales of 18.5 million euros with an ebitda of 2 million.  Bluclad has been an LBO France portfolio company since December 2018.

Fontavis Asset Management, part of Swiss Life Asset Managers since October 2019, signed a partnership with GR Value, an Italian developer of renewable energy plants, for building Aeolian farms and photovoltaic plants with a power of 330 MW (see here a previous post by BeBeez). Fontavis will be the exclusive partner for the pipeline of GRV. Fontavis has assets under management for above 1.3 billion.

London’s Quercus Real Assets hired Greenhill for finding long term investors for a portfolio of photovoltaic plants based in Spain with a power of 800 MW (see here a previous post by BeBeez). The asset may attract the interest of infrastructure funds and industry peers.

Industry 4.0, part of Quadrivio Group, acquired 90% of Texbond, an Italian producer of nonwoven fabrics, from Hig Capital which acquired the asset in September 2016 (see here a previous post by BeBeez). Texbond’s chairman and founder Giuseppe Gaspari and ceo Cristina Parisi will keep their roles. The company has sales of 39 million euros with an ebitda of 8.5 million.

More than 15 Italian and foreign private equity funds would invest in infrastructures, energy, mobility, and digitalization with sustainable finance targets, said the attendees of the webinar of AIFI, the Italian association of financial investors, about the current trend and perspectives about the mentioned sectors. (see here a previous post by BeBeez). The Centre of Excellence on sustainable finance for infrastructure and smart cities (ExSUF) of UNECE-LIUC supported AIFI for this event. The National Recovery Fund allocated 62 billion euros for investing in infrastructures, mobility and logistics.

F2i acquired Compagna Portuale Monfalcone (CPM), a port operator, from the Maneschi family(see here a previous post by BeBeez). CPM has sales of 10.5 million euros, an ebitda of 1.3 million and net cash of 0.3 million. F2i will integrate CPM with its portfolio company FHP which will generate 110 million in sales.

Beppe Fumagalli, the former owner of iconic Italian domestic appliances Candy, acquired a 39% stake in Koinos Capital (see here a previous post by BeBeez). Gianni Mion sold his 31.5% stake while Carmine Meoli sold a 7.5%. The vendors resigned from their executive roles. Sources said to BeBeez that Koinos raised more than 50 million euros from Mediobanca and family offices and is analysing 4 dossiers. Koinos Capital targets Italian family-owned firms with sales of 20 – 100 million for implementing a buy and build strategy.

Gruppo Florence, an Italian aggregation pole of luxury fashion that belongs to Vam Investments, Fondo Italiano d’Investimento (FII) and Italmobiliare, acquired Emmegi, an Italian garments producer, from the Bonacina Family (see here a previous post by BeBeez) The vendors reinvested in Gruppo Florence. Emmegi has sales of 6.45 million euros with an ebitda of 1.7 million.

The club deal platform OMH4, a vehicle that law firm Studio Sebastiani launched together with the financial advisor Ocean Merchant, acquired the majority of Gruppo Kintek, an Italian producer of automotive components, from the founders Laura Cedro and Piero Ozimo (see here a previous post by BeBeez). The vendors will keep a minority of the business and their operative roles. Kintek has sales of 10 million euros with an ebitda of 3 million and aims to grow through acquisitions.

BluVet, an Italian network of veterinary clinics, raised a capital increase that its investors NB Aurora (4.9 million euros) and club deal that belongs to Guglielmo Fiocchi and Maurizio Perroni (2.1 million) subscribed(see here a previous post by BeBeez). The sponsors programmed capital increases for up to 27 million (no more than 19 million for NB Aurora) as part of the agreement for the acquisition of a controlling stake in BluVet in 2020 .