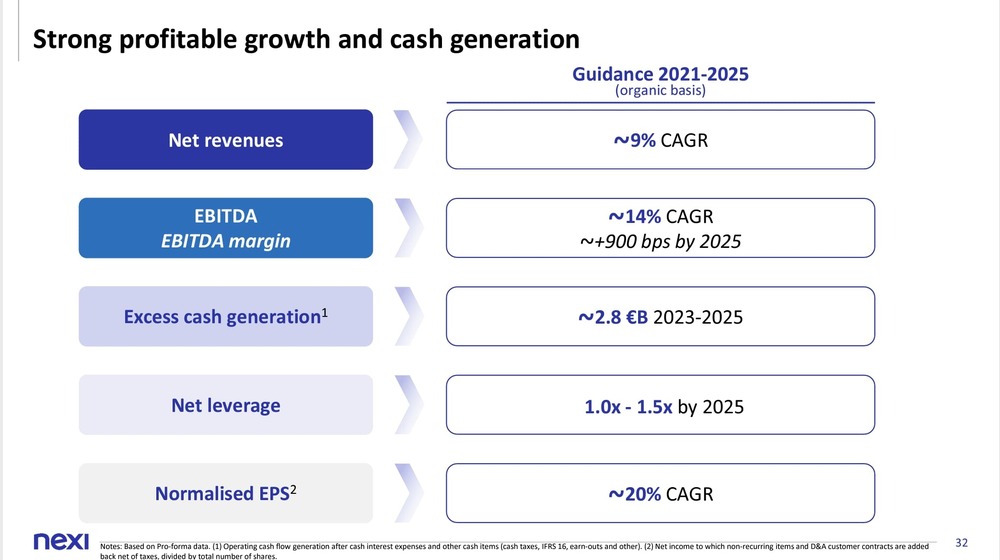 Nexi, a paytech European leader listed on Euronext Milan, which is still partially owned by a group of private equity investors( Hellmann & Friedman, GIC, Bain Capital, Advent International and Clessidra), raised its targets at 2025 for its revenues and ebitda and plans to generate 2.8 billion euros of liquidity that can be invested in m&a transactions, the payment of dividends and/or debt relief. Reduction of debt actually begins immediately, given that a partial buyback of two bonds is on the way. These are the main innovations announced in Milan on Sept. 27 by the group’s top managers on the occasion of the Investor Day (see here a previous article by BeBeez). As for m&a, Nexi  is bidding for the payments unit of Spain’s bank Sabadell which attracted non-binding offers also by French Worldline and US-based Fiserv (see here a previous post by BeBeez). The deal is worth up to 400 million euros. Barclays is acting as Sabadell’s advisor.

QuattroR sgr acquired back a 40% stake of its own capital from CDP Equity, a subsidiary of Cassa Depositi e Prestiti (sSee here a previous post by BeBeez). CDP is an anchor investor in QuattroR’s fund and received from Banca d’Italia the authorization for carrying on the deal.  CDP Equity closed a similar deal last July, selling back to FSI sgr its 39% stake in the shareholding capital of the private equity asset management company of with CDP its in turn an anchor investor.

Silver Economy Fund, a private equity fund that Quadrivio Group launched in April 2021, raised 150 million euros ahead of a target of 300 million and a hard cap of 400 million, while the Industria 4.0 fund is expecting the closing of its fundraising with over 200 million euros in committements by the end of the year (see here a previous post by BeBeez).

Italcer, the holding for the ceramic sector of Mindful Capital Partners, announced the acquisition of Ceramica Fondovalle ahead of the closing that should take place by early October (see here a previous post by BeBeez). Ceramica Fondovalle previously belonged to Effebi (73.53%), Escavazioni Industriali Baroni (17.57%) and further minority shareholders. Ceramica Fondovalle expects to generate sales of 50 million euros in 2022. After such an acquisition, Italcer will have revenues of 360 million and an ebitda of 80 million.

Amundi Eltif AgrItaly PIR announced an investment of 5 million euros through a capital increase for a minority of Gruppo Dagu, a Spanish producer of eggs that belongs to Cleon Capital Advisor a club deal platform that Nicola Zambon founded (see here a previous post by BeBeez). Amundi retained Ashurst as legal advisor. Dagu acquired Ous Roig and Granja Agas in 2021. The company has sales of 120 million euros.

Milan-listed utility Iren’s subsidiary Iren Green Generation announced the acquisition of 51% of SPVs Limes 1 and Limes 2 from from European Energy, a Danish renewable energy company (see here a previous post by BeBeez). The value of the asset is of 4.1 million euros. The spvs have the authorization for developing a 38.87 MW photovoltaic plant based in Italy.

The management of Professionecasa, an Italian network of real estate agencies, acquired 86.2% of the company  itself from Gruppo Gabetti through a management buyout  (see here a previous post by BeBeez). Marco Speretta (chairman), Gianluca Marchegiani (ceo), Luca Licciardello (coo), Giorgia Chirra, Francesco Panaccione, and Ivan De Pasquale are the directors of Professionecasa which has sales of 3.5 million euros.

TIM Management, an interim management, transition and turnaround consultancy firm, acquired a stake in StrategicPeople, a head hunting company that owns the brands StrategicPeople and SalesPeople (see here a previous post by BeBeez). CDI Gobal Italy is an Italian midmarket M&A advisor. Tim Management has sales in the region of 6 million euros.