KKR in exclusive talks with italy’s Tim for a 40% stake in its secondary network which will be transferred to newco FiberCop. It’s a 7.5 bn euros deal. After EU’s ok to Tim and Vodafone’s tlc towers merger, a sale of a 25% stake in Inwit to infras funds is closer 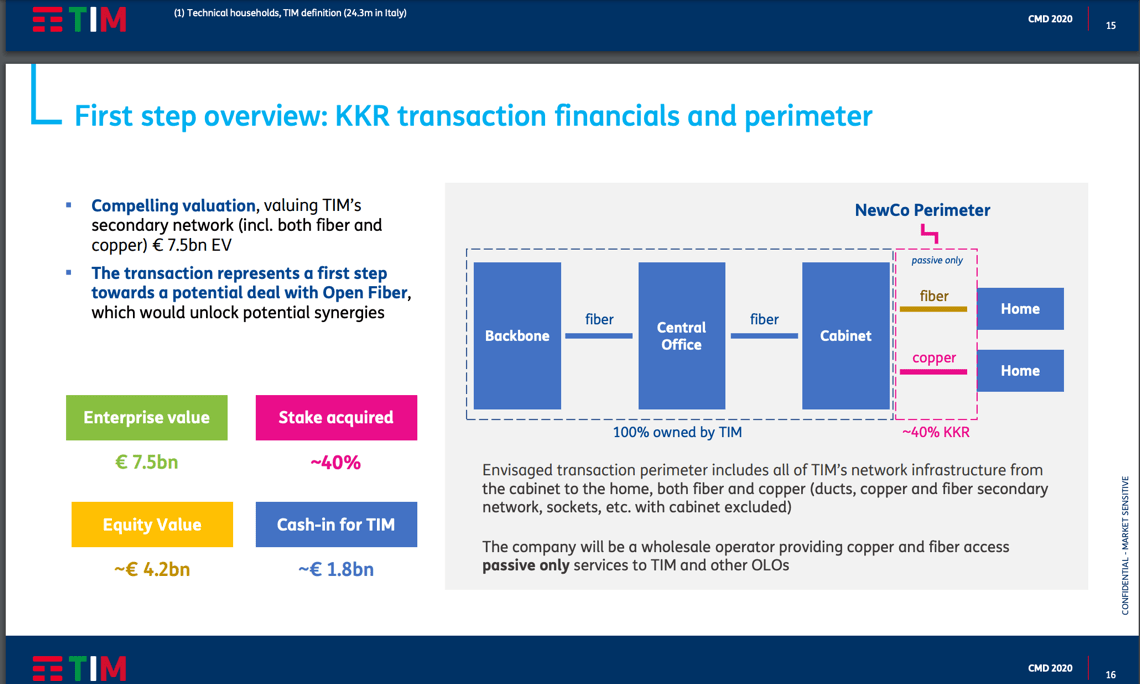 Italy’s tlc group Tim “has guaranteed an exclusive talks period to the KKR Infrastructure fund as financial partner for the development of the fiber network in Italy, following the presentation of a non-binding offer for the purchase of approximately 40% of the secondary network fiber/ copper by Tim and in view of the desired integration with Open Fiber “.

This is what Tim wrote in a press release last Tuesday 10 March, which outlined the guidelines of the 2020-2022 business plan (see the press release here). Tim’s ceo Luigi Gubitosi explained in conference call to analysts yesterday that this transaction will consist in the establishment of a wholesale newco, called FiberCop, in which Tim will bring the secondary fiber and copper network, from the cabinets up to at home. For the purposes of the transaction with KKR, the asset was valued at 7.5 billion, including the debt, equal to 4.5 billion of equity value, with the consequence that 1.8 billion could end up in Tim’s coffers (download here analysts presentation). Last February the fund submitted a non-binding offer to Tim to take over the minority of its secondary network (see here a previous article by BeBeez).

The transaction, Mr. Gubitosi explained in the conference call, represents a first step towards a possible integration with OpenFiber, today jointly controlled by Enel and Cassa Depositi e Prestiti and which has been discussed for months. Last November,  non-binding offers of infrastructure funds for Open Fiber, for Flash Fiber (joint venture between Telecom, which controls 80% of it and Fastweb, which holds the remaining 20%) and for FTTH assets (Fiber to the Home, or fiber home) by Tim (see here a previous article by BeBeez). The idea, it was said then, would be that the funds could take over about half of Open Fiber while the remaining 50%, or slightly below, could go to Tim also through the transfer of the FTTH assets to a newco participated by Tim and the funds . Now KKR has been chosen as the partner with whom Tim will carry on this project. So Tim will in the first place negotiate with KKR to close the deal on its secondary copper and fiber network and then  will try to integrate the asset with Open Fiber.

As regards the evaluation of Open Fiber, initially there was talk of at least 3 billion euros, but even as early as June a Mediobanca study, commissioned by Enel, provided Open Fiber with a valuation of 8 billions, of which 2 billion synergies. As for Tim, according to Reuters he would have valued the asset 5-6 billions. In any case, yesterday Gubitosi clarified that Telecom Italia does not intend to be a minority shareholder either in FiberCop or in a new hypothetical combination of the latter with Open Fiber.

As for the current shareholders of Open Fiber, Enel’s managing director, Francesco Starace, said in an interview with Börsen Zeitung last February that he does not intend to sell his stake, while Cdp, on the contrary, would be willing to sell his (see here a previous article by BeBeez). Yesterday Mr. Gubitosi in this regard said that the negotiations “with Enel and Cdp have continued because it is known that Cdp was more favorable, while Enel is less. Enel must decide whether they are interested or not, however I believe that a relationship of great value has been established with Kkr, a well respected, prepared fund, the proposal makes sense, we are ready to consider it “. As for the merger with Open Fiber, “it makes sense for us, for the shareholders of Open Fiber, for the country, especially in a historical moment in which having a company with excellent well-integrated infrastructure can help a lot”. 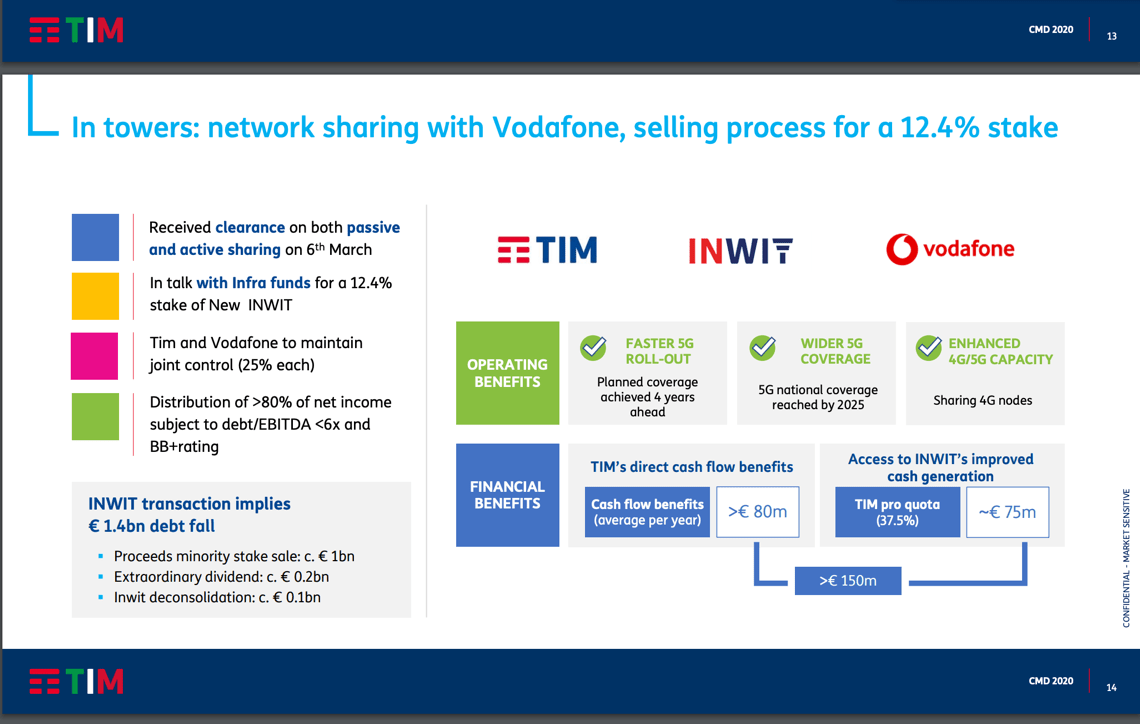 KKR is also one of the funds interested in buying 25% of Inwit (Infrastrutture Wireless Italiane) spa, the company that owns Tim’s mobile phone towers listed on Piazza Affari, which will incorporate and merge with Vodafone Towers srl, the company that owns the Vodafone’s mobile phone towers. The teasers started at the end of January 2020, when the first names of interested funds circulating were those of Ardian Infrastructure and F2i (see here a previous article by BeBeez). while the go-ahead from the Antiturst to the operation between Telecom and Vodafone was still awaited .

The go-ahead from the European Commission came at the end of last week (see the press release here). The integration of the passive network infrastructures of Inwit and Vodafone Italia will create the second largest listed towerco in Europe, with a portfolio of over 22 thousand towers. As a result of the integration, which is expected to be completed by the end of March, Vodafone will collect 2.14 billion euros, as already announced in July 2019, in addition to 360 million Inwit shares, so that Tim and Vodafone will hold the same number of shares, equal to 37.5% each of the share capital, for a total of 75%. At that point Tim and Vodafone will drop to 50.1%, that is to about 25% each, and it is for this purpose that they are looking for new investors among the infrastructures funds. As for Tim, it was explained yesterday in the conference call, it will sell 12.4% of the new Inwit for which it intends to raise about one billion euros. 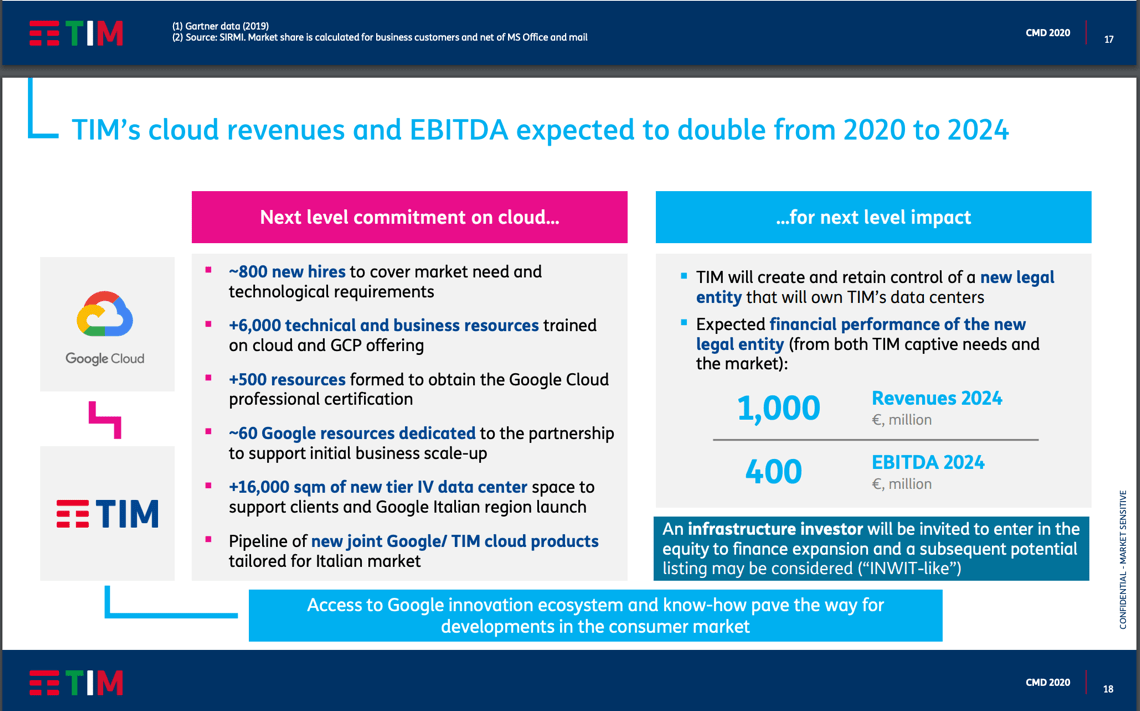 Finally, there is one last possible operation which Telecom Italia is working on and which could involve the funds. This is the carve-out of the development activities of the Data Center and Cloud segment, thanks to the partnership with Google Cloud and the planned establishment of a newco that will manage the related infrastructure and act as a service factory.

Last week, Tim and Google Cloud announced the signing of the official agreement that will launch a joint technological collaboration, following the memorandum of understanding signed in November 2019 between the two companies (see the press release here). Tim and Google Cloud have agreed to work together to create innovative public, private and hybrid cloud services to enrich Tim’s offer of technological services.

As a result of this collaboration, Tim intends to extend its leadership in Cloud and Edge Computing services. Tim aims to accelerate the growth of its revenues from technological services, with the aim of reaching one billion euros in revenues and 400 million euros in ebitda by 2024. Yesterday in a conference call it was explained that Tim is offering infrastructure funds three co-investment proposals: the fiber one, the tower one and the data center. 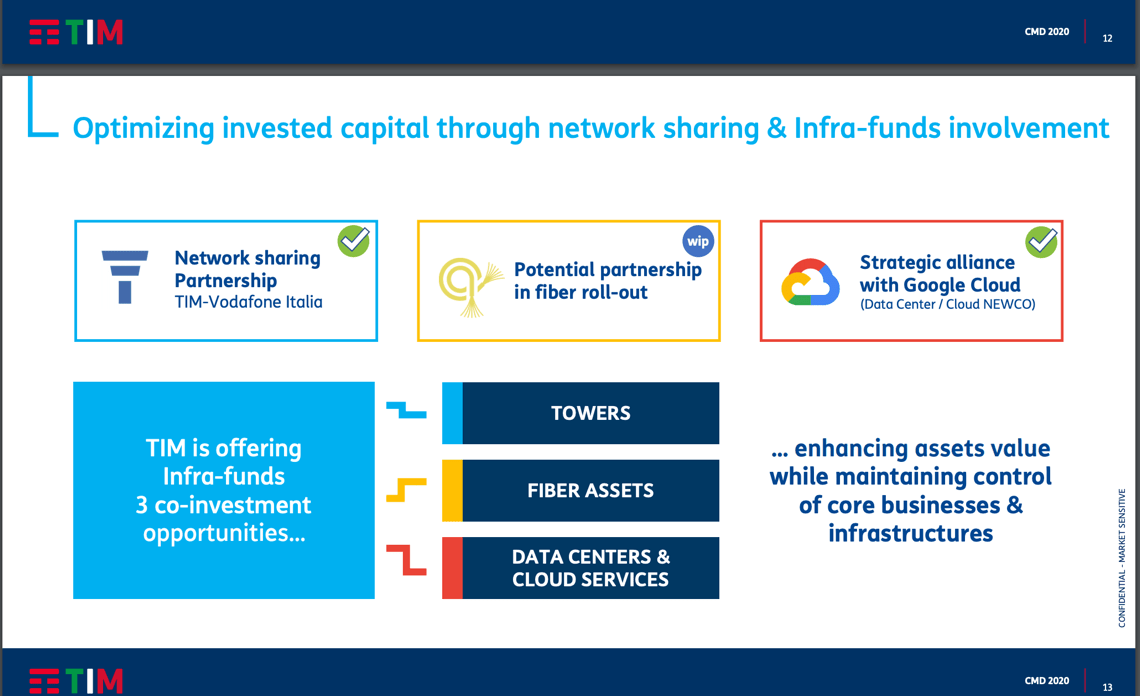