LSE, MTS and Borsa Italiana, here are all the numbers of a deal that is keeping the LSE-Refinitiv mega-merger in check 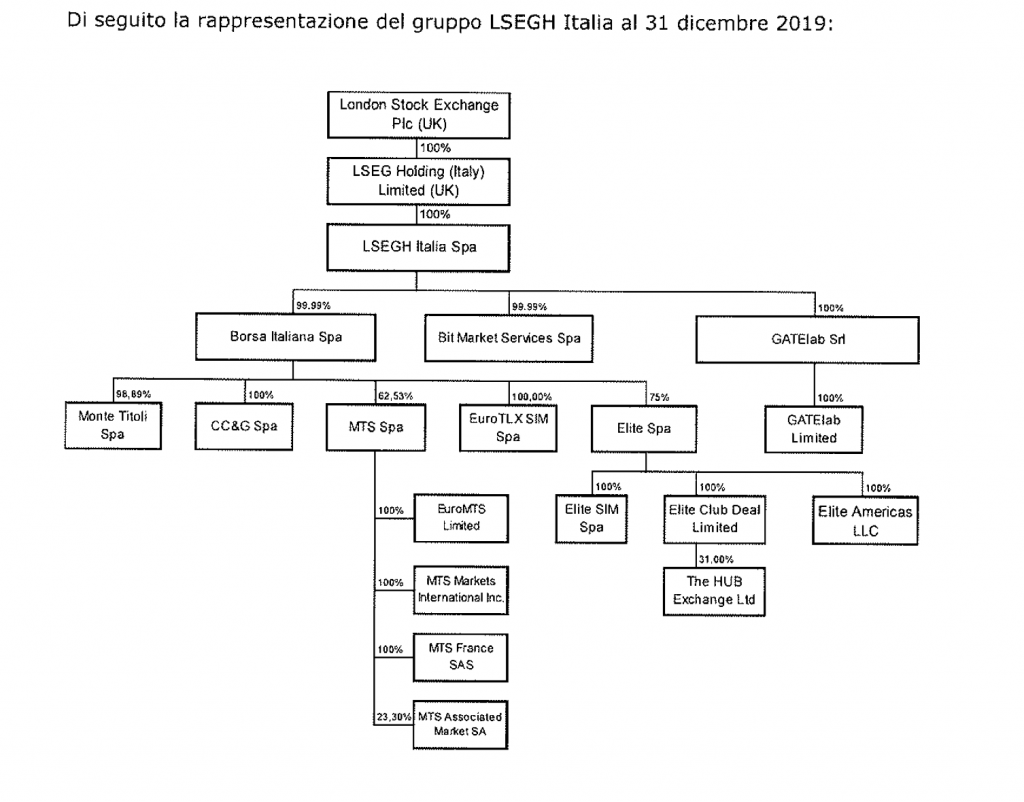 The deadline for submitting bids to the London Stock Exchange for its 62.5% stake in MTS spa, the wholesale trading platform for government bonds, controlled by Borsa Italiana spa, in turn controlled by LSE, expired on Friday 21 Augus (see Reuters).
Among the bids there are, as expected, the one by the consortium Cassa Depositi e Prestiti (the Italian National Promotional Institution) and Euronext (the federation of European lists to which Paris, Amsterdam, Brussels, Oslo, Lisbon and Dublin already belong), advised by Mediobanca and JP Morgan; and the bid by the consortium Deutsche Boerse and Six, the company that manages the Zurich and Madrid Stock Wxchanges, with Citigroup as advisor. MTS is said to have been valued at around  600 million euros, with bids for LSE’s stake said to be between 310 and 375 million euros.
But as it is well known, this is only the first phase of a broader process, which could see the LSE sell not only its stake in MTS, but Borsa Italiana as a whole. The London Stock Exchange, which is advised by Goldman Sachs and Morgan Stanley, confirmed on Friday 31 July that it is considering a sale of the entire Italian Stock Exchange or of the subsidiary MTS. And this happened after LSE had announced the week before that the European Commission had begun a second phase of review of the merger operation between LSE and the information provider Refinitiv (see here a previous article by BeBeez).
The shareholders’ meeting of the LSE had in fact voted at the end of November 2019 with a majority of over 99% the proposal to acquire Refinitiv, in a share exchange operation that will lead the private equity funds that control Refinitiv to own a share of the 37% of the capital of the new group and with just under 30% of the voting rights. All for a 27 billion dollars Refinitiv valuation (see here a previous article by BeBeez). Refinitiv’s shareholders are Blackstone, Canada Pension Plan Investment Board, Singapore’s sovereign wealth fund GIC and other co-investors as well as Thomson Reuters. For the operation to go through, however, a green light from the various Antitrust Authorities involved is required and on this point in fact LSE will have to make a choice, in particular on the MTS front, which would end up being part of the same group as the brokerage platform of Tradeweb Markets bonds which today belongs to Refinitiv.
Bids on the entire Italian Stock Exchange, including MTS, are therefore expected by 11 September. And also this auction should see the Cdp-Euronext consortium on the field, possibly supported by some financial institution, such as Intesa Sanpaolo, and by private equity funds, with Cdp’s sponsored infrastructure fund F2i which could be a natural candidate. Today Euronext is listed with a free float equal to 76.24% and has among  its shareholder Cdc (the French National Promotional Institution) with an 8% stake, Euroclear (8%), Bnp Paribas (2.2%), Sfi-Fpim (the Belgian National Promotional Institution) with a 4.5% and Abn-Amro (0.55%). The project would be to bring Cdp into Euronext’s capital (probably through Cdp Equity), with an identical stake to that of its French colleague, therefore 8%, and with Euronext that would acquire Borsa Italiana.
Piazza Affari was taken over by LSE in 2007 for 1.6 billion euros and today we are talking about a more than double valuation. Bank of America Merrill Lynch analysts indicated a price of 3.3 billion euros in a recent note. While at the end of last year Mediobanca assumed a valuation in the range of 3.5-4 billion euros (see Beez Peak of 25 November 2019). The latter assessment was based on the fact that the Borsa Italiana group (therefore also including MTS, Monte Titoli, Cassa di Compensazione e Garanzia, Elite and the other subsidiaries) would have closed year 2019 with 445 million euros in revenues, an ebitda of 240 million and a net profit of 110 million. Applying an 11x ebitda multiple, as happened for the offer for the Madrid Stock Exchange by Six, Piazza Affari would therefore be worth 2.64 billions, but applying the multiples at which the listed Euronext and Deutsche Börse run on the market, around 15x, it would reach 3.6 billions and even 4 billions if the higher multiples of the listed American Stock Exchanges were applied. Borsa Italiana spa alone then closed 2019 with 181.6 million euros in revenues, 84.9 million ebitda and a net result of 139.6 million (see here the 2019 financial statements of Borsa Italiana spa). As for MTS, 2019 closed with 57,6 million in revenues, an ebitda of 26.3 million and a net result of 41.1 million (see here the 2019 financial statements of MTS spa).
The Italian government’s attention to Borsa Italiana and MTS also manifested itself in the so-called August Decree with an enhancement of Consob’s veto power, provided for by Article 75, relating to “Operations to concentrate and safeguard business continuity”, which introduces a “veto” power of the Financial Market Supervisory Authority, in the event of transfer of ownership of Borsa Italiana. Consob, in fact, will be notified of the transfer of shares exceeding 10% and will be able to freeze the voting rights, in the event that it considers the sound and prudent management of the assets at risk.
On the other hand, financial infrastructures are to be considered strategic and therefore the Italian government has every right to intervene on the issue, now even more so as the government has strengthened the so-called golden power laws in order to avoid that foreign investors might buy strategic Italian companies almost for free as a consequence of the Covi-19 pandemic.

Piaggio Aerospace secures a 30 mln euros loan by Banca Ifis. Production activity is then up and running, while mentre 11 potential buyers are in dataroom