Nexi and Nets formally announce their merger in a 7.8 bn euro deal. Together with SIA it will be a 2.9 bn euros revenues group 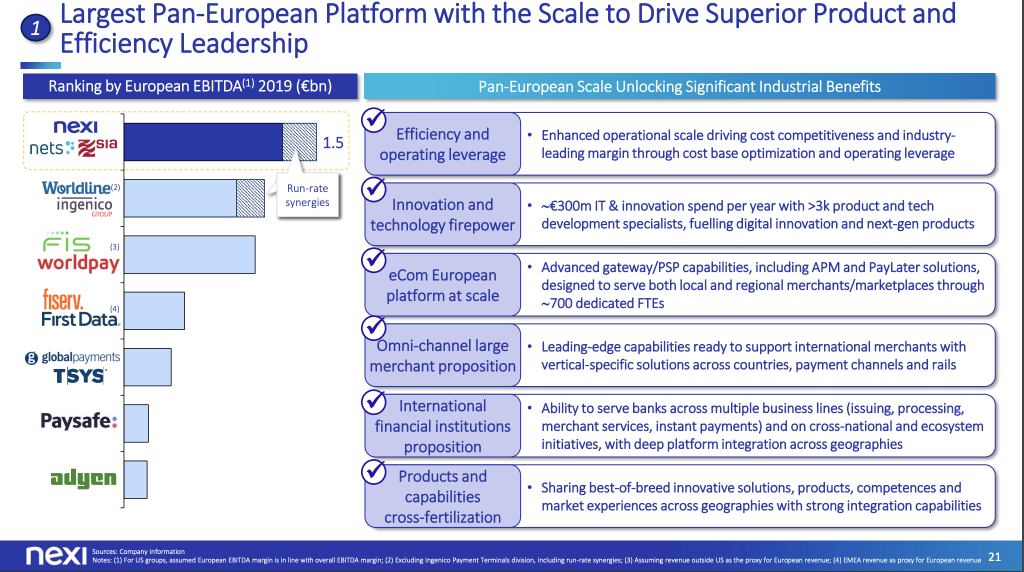 Milan-listed Italian paytech Nexi and Danish electronic payment company Nets, active in the Scandinavian market and in the DACH region (Germany, Austria, Switzerland), yesterday announced the definitive agreement that will lead to their merger (see here press release and here the presentation to analysts). The announcement comes at the end of a 10-day exclusivity period that had been gained by Nexi earlier this month (see here a previous article by BeBeez). Rumors about Nexi’s interest in Nets have been recurring since the beginning of October (see here a previous article by BeBeez).

The transaction will result in the largest pan-European paytech platform, with approximately  2.9 billion euros in estimated revenues and approximately 1.5 billions of ebitda estimated on a pro-forma basis for 2020, including annual recurring synergies fully operational of 170 million euros, in addition to the 150 million euros of synergies already identified in the context of the 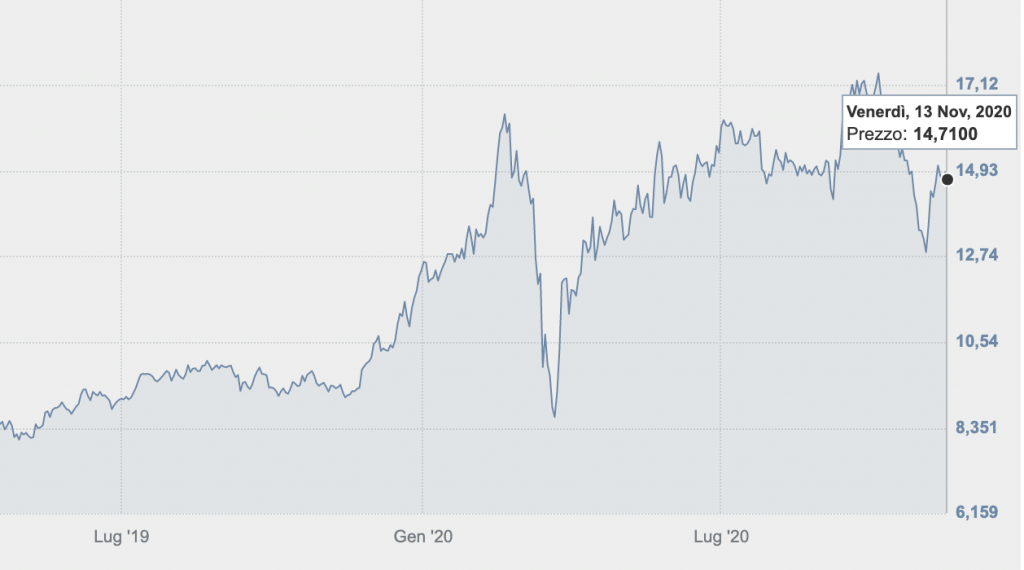 merger between Nexi and SIA, the leading group in payment services and infrastructures, controlled by Cdp Equity (see here a previous article by BeBeez). The aggregate of approximately 320 million recurring annual cash synergies when fully operational, deriving from Nets and SIA, will increase the expected cash EPS by more than 25% in 2022, assuming the closing of both the merger with Nets and SIA. It is expected that the signing of the merger deal with Nets will take place in the second quarter of 2021, following the release of regulatory approvals, and that the completion of the transaction with SIA will take place in the third quarter of 2021.

The operation with Nets will be conducted entirely on a paper -on-paper basis. The agreement provides for the merger of Nets into Nexi, based on equivalent expected EV/Ebitda multiples for 2020. Nets was valued at 7.8 billion euros, therefore less than the 9-10 billions that had been rumored on the market since last August (see Mergermarket here), and equal to an equity value of 6 billion euros, 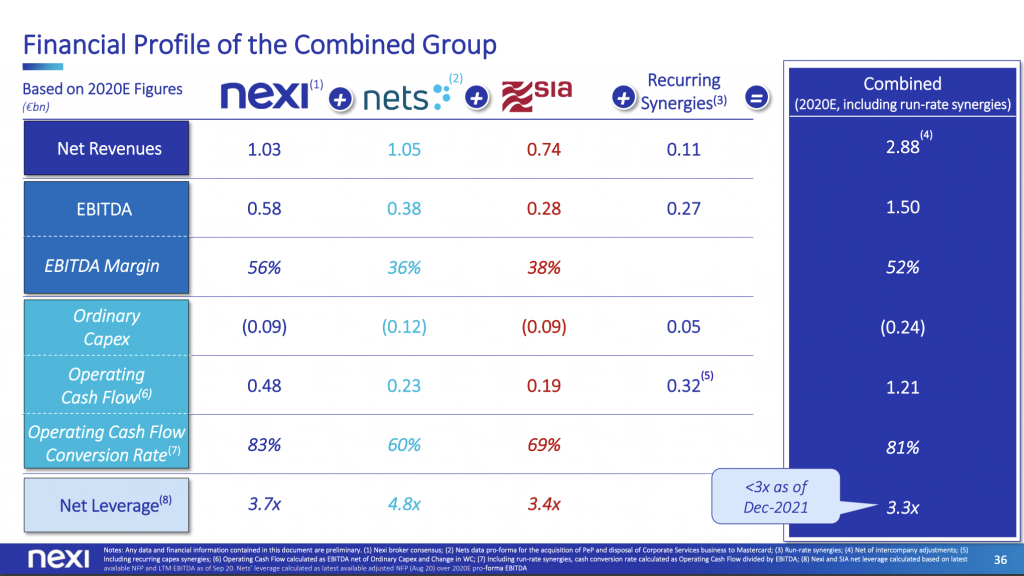 based on a 20x EV/Ebitda multiple for 2020, considering an estimated 2020 ebitda of Nets of 381 million (from 387 million adjusted ebitda in 2019, after 1.1 billions in revenues). In addition, a potential earn-out of up to 250 million euros  is expected to be paid in 2022 in the form of new shares issued by Nexi to Nets shareholders, subject to the performance of Nets’ 2021 ebitda (to an implicit multiple significantly lower).

Nexi for its part closed 2019 with 984.1 million euros in revenues, an ebitda of 502.5 million and a net financial position of 1.47 billion (see here a previous article by BeBeez) and on Friday 13 November it s market cap was 9, 39 billion euros at a 14.71 euros price per share (-1.28% since Thursday 12). That price is the reference price used to calculate the number of new Nexi shares that Nets shareholders will receive for bringing Nets to the new group.

The latter will receive 406.6 million new Nexi shares, equivalent to a pro-forma shareholding of 39% in the new Nexi-Nets group (and 31% if we consider the entire new Nexi-Nets-SIA group). Nexi shares issued to Nets shareholders will be subject to a lock-up mechanism for up to 24 months following the closing, for which one third of these will be locked up for 6 months, one third for 12 months , and the remaining third for 24 months.

Nets is owned by Hellman & Friedman, Singapore’s sovereign wealth fund GIC, and their co-investors Bain Capital and Advent International, which had bought it for DKK 33 billion (approximately 5.3 billion dollars) in a transaction announced at September 2017. Advent International and Bain Capital are the same private equity firms that, together with Italian private equity firm Clessidra, are shareholders of Mercury UK, the investment vehicle that currently owns a 20% stake in Nexi, after the latest sale of shares in an accelerated bookbuilding operation in early October (see here a previous article by BeBeez).

To carry out the operation it will not be necessary to resort to new financial debt; at closing, it is expected that Nets will have a debt to be refinanced of approximately  1.5 billion euros, for which a bridge loan from leading international banks is already guaranteed.

At the closing, the Board of Directors of the new group will be chaired by Micaela Castelli, current chairman of Nexi. The new group will be led by the current Group ceo of Nexi, Paolo Bertoluzzo, and the current Group ceo of Nets, Bo Nilsson, will become a non-executive member of the board of Nexi and will assume the position of president of Nets. In addition, Hellman & Friedman will also appoint another board member upon completion of the transaction.

The ceo of Nexi, Paolo Bertoluzzo, commented: “Thanks to the just announced transaction, which follows the recent merger agreement with SIA, the European leader PayTech is born with unique scale and skills to better serve all customers in the new Group in Europe: from citizens to merchants, from partner banks to companies, from the Public Administration to institutions. Nexi will have the opportunity to develop in a market four times larger than the current one and still under-penetrated and with double-digit growth rates. The new group, with a presence in over 25 countries, will be able to act as an engine of digital change in Europe and make a fundamental contribution to the transition to cashless. Nexi people, together with our key shareholders, are at the same time strongly motivated by the vision of the New Group and strongly committed to pursuing this new important step forward in our path of creating value. We are happy to join forces with a highly talented team like Nets, which is effectively driving the transformation of their group. The combination of highly qualified professionals motivated by a great passion like those of the New Group has all the potential necessary to lead the innovation process in the payment sector in Europe in the years to come”.

The ceo of Nets, Bo Nilsson, commented: “The transaction represents an important milestone in Nets’ journey to become a payments champion in Europe, from our inception as a local player in Denmark and Norway to our evolution as an operator entirely dedicated to payments at European level. Thanks to the constant innovation and the great effort of our colleagues, Nets has changed the landscape of payments in the countries of Northern Europe as well as in the rest of the continent, creating solutions with higher added value for its customers and stakeholders. We are thrilled to be able to join forces with those of Nexi, with whom we can together represent a reference point for the payments industry and seize new growth opportunities across the sector thanks to our presence in structurally attractive markets such as Germany, Austria and Switzerland, as well as in a fast growing market like Poland. Denmark and the countries of Northern Europe remain important focus areas for the group, leveraging on the experience that Nets has developed in serving one of the most advanced regions of Europe from a digital point of view. Today’s announcement is a testament to the skills and commitment of all our Nets colleagues”.

Nets is one of the leading pan-European integrated players in the paytech sector, active in 20 countries, with a leadership position in the most advanced digital payments markets, such as the Nordic countries, as well as in less penetrated markets with significant growth potential (such as Germany, Austria, Switzerland, Poland and Central and Eastern Europe). Over the past 3 years, under the leadership of Hellman & Friedman, Nets has undergone significant transformations and investments that have led to substantial growth in its core business, both organically and through strategic m&a such as the merger with Concardis Payment Group and the acquisitions of Dotpay/ eCard, P24 and PeP. Following the sale of Nets’ account-to-account business to Mastercard, which will be completed prior to closing the merger with Nexi, Nets today focuses on merchant services, with strong exposure to e-commerce and payment services innovative digital.

KKR signs closing for a 70% stake in CMC Machinery. This is the first Italian deal for the KKR Global Impact Fund