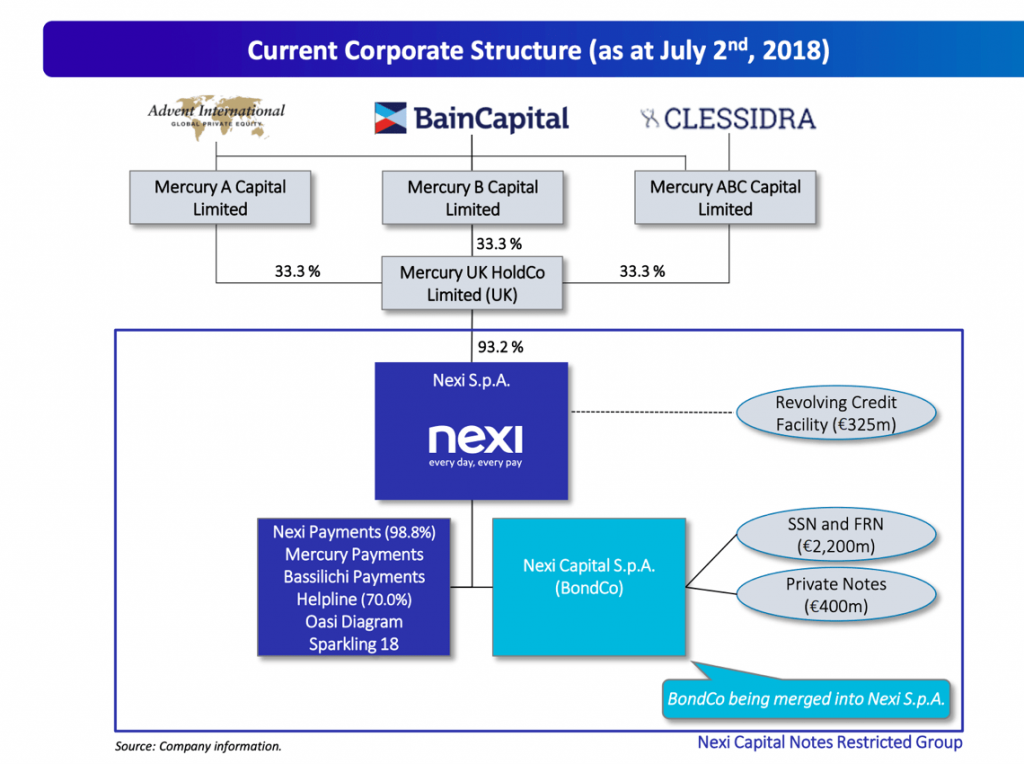 The board of directors of Nexi Group approved last week the progress of the listing project that led to filing to Consob of the necessary documentation for the ipo of the payment services group, which is valued up to 7.5 billion euros. The meeting of the board also noted the resignation of Franco Bernabè, in view of his imminent return to Tim, indicating as new chairman Michaela Castelli (current chairman of Acea and since December chairman of Sea). Giuseppe Capponcelli was confirmed as vice president and Paolo Bertoluzzo as ceo.

At the end of January, Nexi officially launched its ipo (see here a previous post by BeBeez), appointing Evercore as its advisor, while Banca Imi, BofA Merrill Lynch, Credit Suisse, Mediobanca and Goldman Sachs will be the consortium banks for the ipo, which could be further expanded. Banca Imi is also the sponsor of the operation. Joint bookrunners will be Barclays, Citi and HSBC.

“The Nexi ipo, potentially one of the three biggest in Europe in 2019, is a great deal and should give, hopefully, a signal of great confidence for investors who want to come to Italy”, commented Raffaele Jerusalmi, ceo of Borsa Italiana, speaking at a conference organized by Baffi Carefin Bocconi and Equita on the Italian corporate bond market (see here a previous post by BeBeez). Mr. Jerusalmi added: “I think it will be in mid-April, this is the expectation, partly because I believe that the company’s investor orientation is not to wait for the European elections, to avoid going into a situation of greater confusion,” he said. number one of Borsa Italiana.

Nexi is now 93.2% controlled by Mercury UK Holdco Ltd, the vehicle that is jointly owned by the private equity funds Bain Capital, Advent and Clessidra, and is also owned by a dozen or so banks including Banco Bpm , Credito Valtellinese and Popolare di Sondrio, holders of shares exceeding 1%.

The ipo could be mixed (both sale of shares and capital increase) and t it has not been defined if it will only be addressed to institutional investors, more probable option, or if it will be open also to retail. In any case, there is talk of a float of at least 35%. 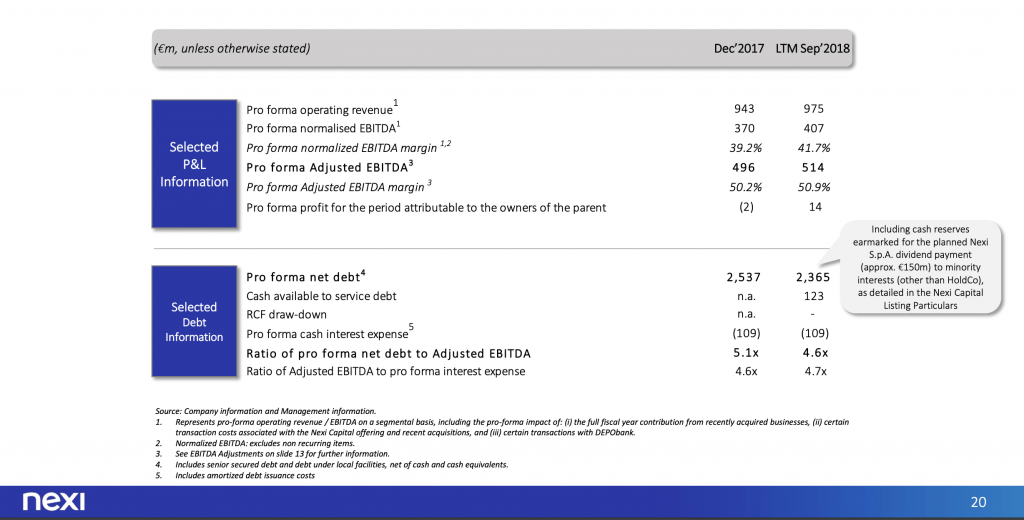 In 2017 the Nexi group had revenues of 855.9 million euro and an ebitda of 303.9 million (see here the consolidated financial statements for 2017), with the ebitda that at the end of 2018 is estimated to grow to even 530-540 millions. The pro-forma figures (which take into account all the latest acquisitions of the group) of the last 12 months at the end of September 2018 (see here the presentation of the nine-month accounts), indicated an ebitda of 514 million, up from 496 million pro-forma at the end of 2017. The valuation multiples, therefore, are in the order of 12-15 times the ebitda, for an enterprise value of between 6.5 and 7.5 billion, including the net financial debt of about 2.5 billion.

Last July the Nexi group split into two: on one hand, DEPObanki, which merged all the securities services and intermediation services that require a bank license (custodian bank) and, on the other, the new Nexi Group, formerly Mercury Payment Services (formerly Setefi Payment Services), which encompasses all payment activities and group subsidiaries focused on payments (see other BeBeez article). The two distinct groups of companies will continue independently in the development of their respective businesses and in the pursuit of related strategies through their independent management.

In May 2018, before a spin-off of its depositary bank activities, the group had refinanced the bonds listed on the Luxembourg Stock Exchange for a total of 2.2 billion euros and had issued 400 million new bonds placed in private placement (see the press release here) . In detail, Mercury UK Holdco Limited issued and placed in May: 825 million euros of secured senior notes maturing on 1 November 2023, priced at par and with a coupon of 4.125%; 1.375 billion euros of bonds maturing on 1 May 2023, priced at par and variable coupon equal to the 3-month Euribor rate plus 362.5 basis points. Then, in July, Mercury UK Holdco Limited placed another 400 million euros of senior secured bonds with a 3-month Euribor coupon (with a 0% floor) plus 362.5 basis points.