The group had put on sale its retail activities last Spring. GS Retail is 55% controlled by FSI and 45% by Eurostazioni and Grandi Stazioni is engaged in the renovation enhancement and management of Italy’s 14 largest railway stations, two railway  stations in Czech Republic and one commercial gallery in Naples.

As far as many sources are concerned, nine bids had been delivered to financial advisor Rothschild, five of which from consortiums and four from single bidders. 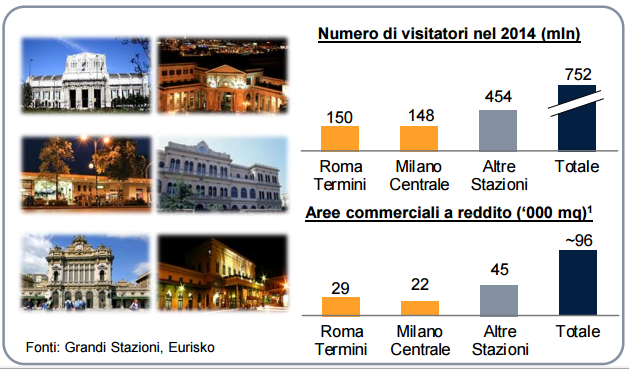 Other bids have come from BC Partners, Lone Star and  Terra Firma private equity funds, Singapore’s sovereign fund Gic and real estate developers Klepierre and Altarea, while no bids came from Blackstone, F2i, Clessidra and Cvc funds, even if they were expected to partecipate the auction.

Seven bids will be selected to a second stage and bidders will be admitted to dataroom and management meetings. Binding bids are expected by the third week of April and by the end of April the winner will be identified.

GS Retail’s value was said to be about 750-800 million euros and somebody even said that the company might have been valued one billion euros. However it seems that non binding bids were for no more than 600-700 million euros.  FY 2014 GS Retail reached 1111 million euros in revenues with 49 millions in ebitda, the deal teaser document published on Grandi Stazioni’s website says. The same document sees both revenues and ebitda to more than double by 2020.

Credit funds may buy Npls too in Italy, Consob says

US Reichold is frontrunner for Italy’s polymer material maker Polynt