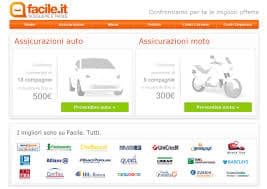 Led by chairman Mauro Giacobbe and ceo Angelica Pellizzari, it is partially (20.39%) owned by Barbara, Eleonora e Luigi Berlusconi, daughters and son of former Italian Premier Silvio Berlusconi. The young Berlusconi’s bought their stake in 2011 through Holding Italiana Quattordicesima, the same veichle which owns a 21.42% stake in Fininvest.

Originally established in 2008 to provide consumers with access to the best car insurance premiums, Facile has subsequently built a diversified range of products to broaden its revenue base including gas and electricity, broadband internet services, bank accounts and mobile phones. The site counts now about 1.5 million clients per month.The business had revenues of 28.6 million euros and ebitda of 4.7 millions for the year ended 31 December 2013 (up from 19.3 millions and 0.4 millions respectively in 2012).

Oakley Capitalis an investment company listed at AIM Stock Exchange in London. It will be able to benefit from the sector experience it have gained through fund I’s earlier investment in Verivox, Germany’s leading consumer energy and telecommunications price comparison website.