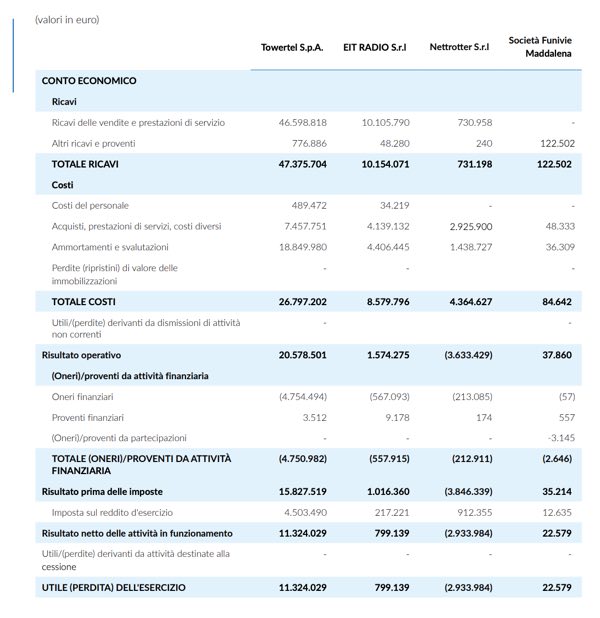 Phoenix Tower International announced on Christmas Eve the acquisition of control of TowerTel spa from EI Towers spa (see here the press release). The latter is a portfolio company of F2i sgr, which owns Mediaset’s TV transmission towers and was delisted from the Italian Stock Exchange in 2018 following a takeover bid launched by F2i together with Mediaset itself (see here a previous article by BeBeez). TowerTel, which holds the pylons on which the transmission infrastructures are housed, was on sale since last June (see here a previous article by BeBeez). F2i will retain a minority stake in TowerTel of approximately 20%. The company is said to have been valued at around 500 million euros.

EiTowers is 60% controlled by F2i TLC 1 spa, wholly owned by the Terzo Fondo F2i, and the remaining 40% is controlled by Mediaset. Based on the 2019 consolidated financial statements of EI Towers, Towertel achieved revenues of 47.4 million euros in 2019, with an operating result of 20.6 million. The investment in Towertel, equal to 100% of the capital, is indicated in the financial statements of EI Towers with a net asset value of 109 million at the end of 2019 against a book value of 94.3 million. Also at the end of 2018, EiTowers had receivables from Towertel for approximately 127 millions.

Founded in 2013, PTI is headquartered in Boca Raton, Florida and owns and operates over 12,500 tlc towers, a 986-kilometer fiber network and other wireless infrastructure in 16 countries in the US, Europe and Latin America. PTI has been controlled by Blackstone Tactical Opportunities since 2014, which recapitalized it for $ 1.4 billion in February 2020 (see the press release at the time here). In July 2018 Blackstone had sold a minority stake in PTI to John Hancock Life Insurance Company and John Hancock Infrastructure Fund (see the press release at the time here). Today Blackstone controls PTI with a 62% stake.

Dagan Kasavana, ceo of Phoenix Tower International, commented: “PTI is thrilled to enter the vibrant Italian wireless market and to serve the industry’s leading players. We look forward to growing revenues, developing new towers and investing in next-generation solutions on behalf of our clients ”

Renato Ravanelli, ceo of F2i, added: “This investment by PTI testifies to the growing interest by global players in the high quality of Italian infrastructures. We are delighted to partner with a leading wireless infrastructure operator with Blackstone’s support in such an important sector for the development of the telecommunications market. ”

Last year F2i and EI Towers acquired Persidera, the Italian leader in digital terrestrial television signal transmission networks, sold by Tim and Gedi for an enterprise value of 240 million euros (see here a previous article by BeBeez). Persidera was split into the companies NetCo, which merged the company compendium of the infrastructures for radio and television transmission on terrestrial frequencies (passive infrastructures and transmission equipment), and MuxCo, which holds the purely intangible assets (the rights to use the frequencies) and certain network assets and will manage commercial relations with television publishing customers (audiovisual media service providers). 100% of the shares of MuxCo was acquired by a company specifically set up by F2i TLC 1 spa, while 100% of the company NetCo was acquired by EI Towers.

Ei Towers’ exit from the TLC tower business could be preparatory to an evolution of the business towards that of broadcasting towers. Several times in recent years the hypothesis has been advanced that EiTowers can be combined with RaiWay, listed on the Milan Stock Exchange. The operation had already been attempted in 2017, but ran aground due to the veto placed at the time by the Renzi government and Rai, Italy’s public television group.