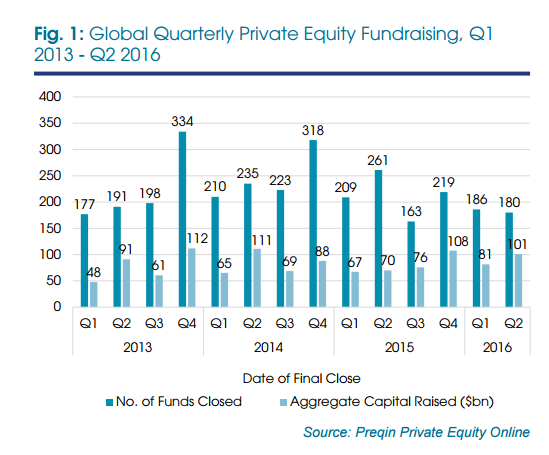 Private capital has seen its lowest level of fundraising in H1 in three years; funds closed so far in 2016 have raised a combined $281bn, down from almost $300bn raised in the first half of last year, Preqin says.

Although Preqin expects these numbers to rise by 10-15% as more information becomes available, Q2 2016 fundraising represents a retreat from near-record levels seen in recent quarters. Despite this, more fund managers have continued to come to market with new vehicles in the first part of the year. The total number of private capital funds on the road now stands at 2,798, which are seeking a combined $938bn.

The private equity fundraising market accelerated in Q2, as 180 funds closed securing a combined $101bn. Given that these numbers are expected to rise 10-15% as more information becomes available, the aggregate capital secured by funds closed in the quarter looks set to approach the record $112bn seen in Q4 2013. North America-focused funds were the key driver of growth in the quarter; 96 funds focused on the region raised $60bn, accounting for 59% of the aggregate capital raised globally. By contrast, Europe saw 44 private equity funds raise just $33bn in Q2, of which the Ardian Secondary Fund VII accounts for $10.8bn.

The level of uncalled capital available to fund managers of core private equity strategies hit new record highs, rising from $745bn at the end of 2015 to $818bn as of the end of June 2016. As of the start of July, there are 1,720 private equity funds in market worldwide, targeting an aggregate $447bn, compared to 1,630 funds that were seeking $488bn at the start of the year. 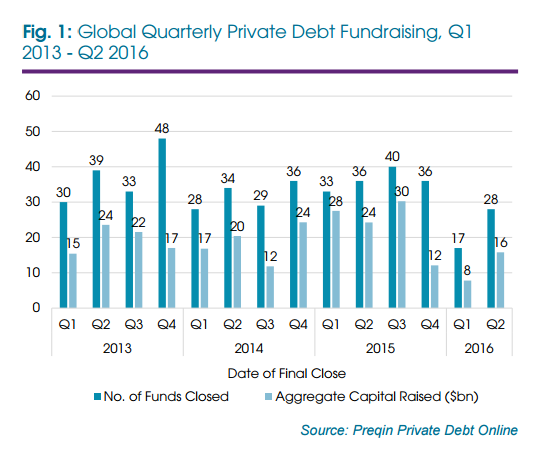 The second quarter of 2016 saw 28 private debt funds close, raising a combined $16bn. This is more than double the $7.8bn seen in the opening quarter, and an increase from the $12bn raised in Q4 2015. Increased fundraising was driven by three large direct lending funds, all closing on more than $1bn, and accounting for 42% of total private debt capital secured in the quarter. Nonetheless, fundraising remains down on the levels seen in recent years, with the fi rst three quarters of 2015 each seeing in excess of $24bn raised, including an all-time peak of $30bn in Q3. The competitive fundraising market indicates that private debt managers remain confi dent of securing investor commitments, with 276 vehicles currently on the road, targeting an aggregate $140bn. There are 114 direct lending funds on the road, the most of any strategy, seeking a combined $45bn in investor commitments, while 69 mezzanine funds are targeting $31bn. Despite there being only 38 distressed debt funds in the market, the strategy is targeting $46bn of investor capital, the highest of any strategy. 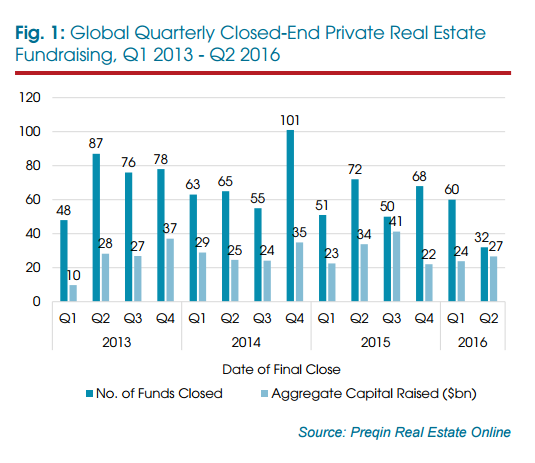 Private real estate fundraising in Q2 was dominated by two opportunistic funds (by Lone Star Funds and Brookfield Asset Management) , which accounted for 56% of all capital secured during the quarter. Overall, 32 funds reached a final close securing $27bn in investor capital, up slightly from the $24bn raised in Q1. Following robust fundraising in Q2, dry powder has increased from $210bn at the end of 2015 to $239bn in June 2016. Dry powder is on track for a fourth successive year of growth, increasing by 53% from 2012.

Although the number of private real estate funds in market has risen from 393 in January 2010 to 505 in July 2016, the total target capital has remained steady, decreasing slightly from $176bn to $175bn over the same period.