bybebeez
in Data&Analysis, Events, Private equity, venture capital and private debt data in Italy
A A
Share on FacebookShare on Twitter 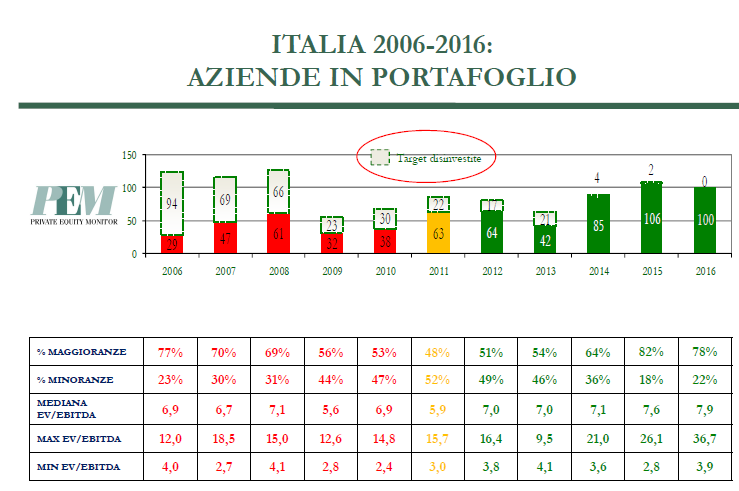 Last December 31st 2016  private equity funds had stakes in 667 Italian portfolio companies which had been bought between 2006 and 2016 out of a total of 1,015 companies bought in the same period (so they had exited 348 companies in the period), MF Milano Finanza wrote last Saturday.

Those data come from  the last Castellanza University’s Private Equity Monitor (Pem) annual report, which is chaired by Anna Gervasoni, directed by Francesco Bollazzi and supported by Eos Investment Management, EY, Fondo Italiano di Investimento sgr and McDermott Will & Emery law firm. The new annual report is going to be presented this afternoon in Milan (see here the event program).

The average holding period of a portfolio company dropped to 5 years at the end of 2016 data show, down from 5 years and 3 months the year before and in line with years 2014 and 2013. Which means that all companies entered in funds’ portfolios before 2012 (which are 270) might be ready to be sold by the funds.

Out of the 348 exits made by the funds in the period 2006-2016, the major part (36%) consisted in releverage deals (i.e. sale to other funds), a 33% in trade sale (i.e. sale to  industrial buyers) and just a 4% through an ipo on a Stock Exchange. Buybacks from previous shareholders were just 6% of the total, while there were an 8% of total or partial write-offs.

Avenue Capital and Euorpa Investimenti to save Selcom Elettronica