Sia mulling one bn euros ipo, ceo Nicola Cordone says. While chilly on the hypothesis of a merger with Nexi 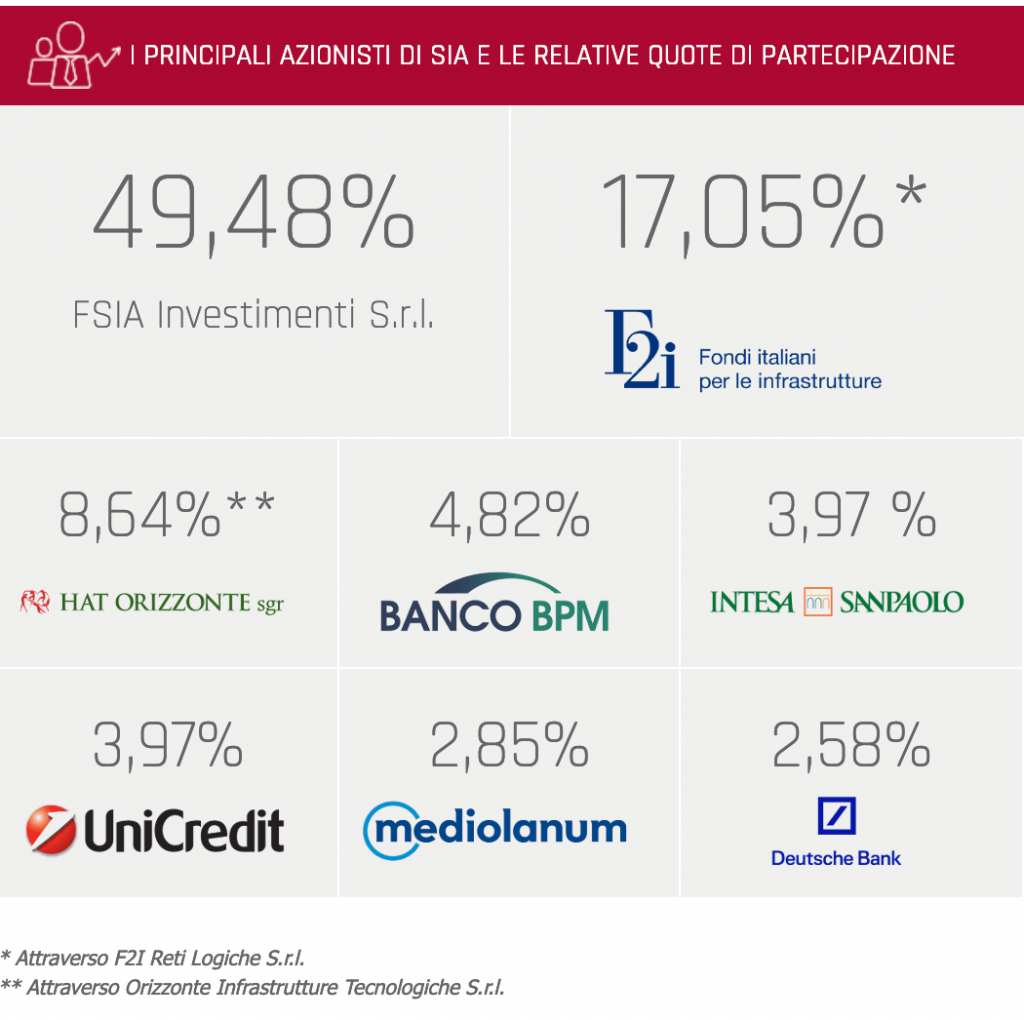 Sia spa, the leading European hi-tech company in the services and payment infrastructure sector, controlled by Cdp Equity (owned by the Italian Government),  is aiming at a one billion euros ipo, if an ipo is to be launched. Sia ceo Nicola Cordone said this yesterday at the presentation of the 2019-2021 business plan to the press.

The manager explained that a final decision on the ipo issue has not been taken yet, but that it will be decided by next Summer. In any case, the ipo would consist part in a capital increase and partl in the sale of a portion of the shares held by the shareholders. To date, the capital of Sia is controlled at 49.48% by Cdp Equity and Poste Italiane, through FSIA Investimenti srl, and participated with a 17.05% stake by F2i sgr, with 8.64% by HAT Orizzonte sgr and for the rest by Banco Bpm, Intesa Sanpaolo, Unicredit, Mediolanum and Deutsche Bank.

The last transaction on the capital of Sia which provided an official valuation for the group was the transfer of a portion of Sia shares owned by Cdp Equity to Poste Italiane in September 2016. The transfer was based on an equity value for Sia of 2 billion euros (see here a previous post by BeBeez). Poste Italiane, in fact, with a total investment of 278 million euros, had bought 30% of FSIA Investimenti srl, the company that holds 49.48% of Sia and which is 100% controlled by FSI Investimenti spa (in turn controlled by Cdp Equity with a 77.12% stake and with a 22.88% by the Kuwait Investment Authority). Following the transaction, Poste Italiane indirectly holds a 14.85% stake in Sia, while FSI Investimenti indirectly holds a 34.63% of the company.

The hypothesis of ipo for Sia is intertwined with that of the imminent ipo of Nexi, the other big player of electronic payments in Italy, controlled by the funds managed by Bain Capital, Advent International and Clessidra sgr, which has already filed the documents for listing to the Italian supervisory authority Consob in view of an expected floating in mid-April, based on a group valuation of up to 7.5 billion euros (see here a previous post by BeBeez). In fact, it has long been said that Cassa Depositi e Prestiti, which is essentially the controlling shareholder of Sia, if we count together the shares held by Cdp Equity and those held by the F2i fund, is advocating marriage between the two groups. On the subject, Mr. Cordone has made it clear that he disagrees, but that obviously if the shareholders decide in this direction, the merger will be made, but it will only be an intermediate step along the road to becoming a leader in Europe in the digital payments sector.

More precisely, Cordone said that currently there is not a file open on Nexi, but if you had to do, apart from the Antitrust issues that are likely to make us stand still for months, we should face aggregation, which is not for free and which, however, would slow down our growth scenario in Europe”. Mr. Cordone also specified that “our shareholders banks support the enhancement of Sia and they want to maintain the bank friendly business model (ie addressed to the institutes, without direct contact with the final customer unlike Nexi, editor’s note.) They are willing to support growth in Europe and to support the ipo and also CDP is fully in line with the idea of ​​maintaining this business model”. That said, Mr. Cordone admitted, “if, however, the merger option with Nexi was decided by the shareholders, it can become interesting, but it would be an intermediate step to reach our goal that is to become a leader in Europe”. The next Board meeting to address the topic will however be next 7 March.

The listing, Mr. Cordone stressed, would allow to finance new acquisitions in addition to the two that Sia is already preparing to do at the moment. The group has been in fact shortlisted for the acquisition Austria’s Card Complete (50.1% owned by Unicredit) and Portugal’s Sibs: the final offers for the two deals are expected by the Summer. Mr. Cordone underlined that Sia can invest in these deals up to about 500 million, increasing its leverage which is currently quite low, with a ratio of 2.3 times between net financial debt and ebitda.

The most recent acquisition dates back to May 2018, when Sia had signed an agreement with US First Data Corporation to take over the First Data operations in some Central and South-Eastern European countries for 375 million euro, based on the the fact that these activities led to First Data total revenues of around 100 million euros (see here a previous post by BeBeez). That transaction followed the acquisition by Unicredit Business Integrated Solutions of the processing of payments by payment cards of their own in Italy, Germany and Austria in August 2016 (see here a previous post by BeBeez).

Sia is one of Italian portfolio companies monitored by BeBeeez Private Data
(find here how to subscribe to the Combo version which includes the reports and insights views by BeBeez News Premium 12 months,
for only € 110 per month) 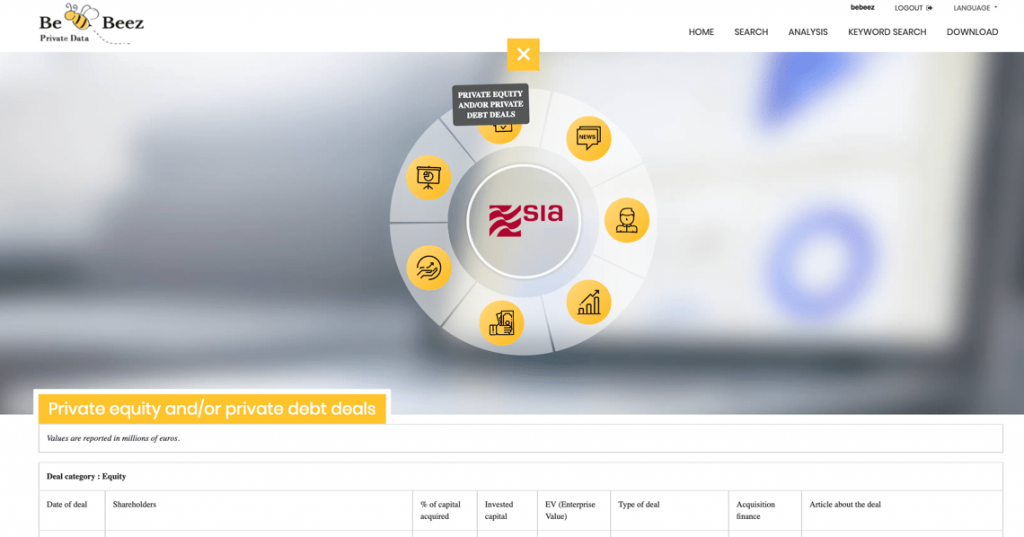