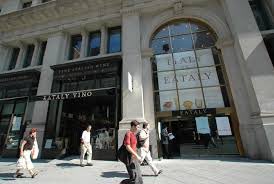 Tamburi Investment Partners spa (TIP), an independent investment bank listed on the Italian Stock Exchange, has acquired a 20 pct stake in Eataly, the well known Italian luxury retail food chain founded  by Mr. Oscar Farinetti (download here the English press release). The deal has been finalised with the advisory services of Bnl-Bnp Paribas and Unicredit Group.
More in detail, TIP is buying the stake through the company vehicle Clubitaly srl, which in turn is owned by TIP (70 pct) and by a group of family offices, who are shareholders in TIP. The vendor is Eatinvest srl (controlled by the Farinetti family) and the price tag is 120 million euros, with the provision of a profit sharing mechanism and/or of stakes adjustments depending on ipo or other possible liquidity events in the coming years. A portion of the resources cashed in by Eatinvest will be reinvested in Eataly, also with the aim to support the relevant development plan. Actually, Eataly shareholders have shared with TIP the objective to list the company on the stock exchange in 2016/2017, subject to financial markets conditions,
Established in 2003 in Alba by Oscar Farinetti, Eataly expects to reach consolidated revenues of about 400 million euros (excluding the franchisees) with and ebitda of about 45 million euros; in 2010-2013 Eataly had an average yearly growth of revenues higher than 33% and of the Ebitda higher than 75%.
Eataly is currently present in Italy, Unites States, Middle and Far East with a network of 30 stores already operating and is realizing a significant plan of new openings in some of the main cities of the World. Contracts for the next openings in Moscow, Sao Paolo of Brazil and London have already been subscribed. In the United States in the next three years – also in consideration of the great success experienced by the New York and Chicago stores, openings in Los Angeles, Washington D.C., Boston and New York (World Trade Center are expected), It is confirmed the opening for the next March, 18 of a store of 5,500 square meters in the Teatro Smeraldo in Milan with  13 monothematic catering points, 1 “starry” restaurant, 5 hand-crafted production points and a big wine shop with the best Italian wines.
Less than one year ago, the Italian venture capital operator 360° Capital Partners supported Eataly in the capitalization of  Eataly Net srl, Eataly’s e-commerce business. The venture capital fund invested about 2 million euros for a 30 pct stake, while Eataly ownes a 60 pct stake and the rest being controlled by Eataly Net’s ceo Franco Denari.

Lazard will advise Cerved Group in the ipo process