Technogym debuts with a 11.4% jump at the italian Stock Exchange 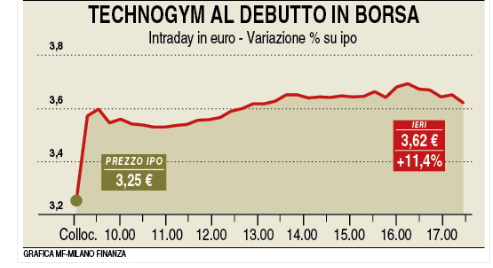 Technogym closed with an 11.4% jump to 3,62 euro per share its first day of listing yesterday in its debut at the Italian Stock Exchange.

The world leading supplier of technology and design-driven products and services in the wellness and fitness industry was priced 3.25 euros per share in ipo last week in the lower hand of the 3-3.75 euros price range with an initial market capitalization of 650 million euros (see here a previous post by BeBeez).

Technogym initial equity value was actually well under evaluations circulated on the market in the last few months on the basis of what was recorded on Candover Investments’ FY 2015 preliminary results. Candover Investments is actually the LSE-listed investment company that had invested in Technogym together with Arle Capital Partners (former Candover Capital Partners) and it valued Technogym’s entire capital about 700 million pounds or 890 million euros at the end of 2015.

Technogym’s global offering closed last April 28th with orders which have been four times the number of offered shares. Advisors for the deal were Mediobanca, Goldman Sachs and  Jp Morgan, with Nextam Partners as co-lead manager. Institutional investors were offered to buy 57.5 million shares (or 28.75% of Technogym’s capital ,including the greenshoe option) owned by Salhouse Holding, the investment vehicle controlled by the private equity firms.

Salhouse cashed in 186.9 miillion euros and retains a 11.25% stake in the company capital, while the Alessandri family did not sell any share and keeps strong control with its 60% stake in teh company.