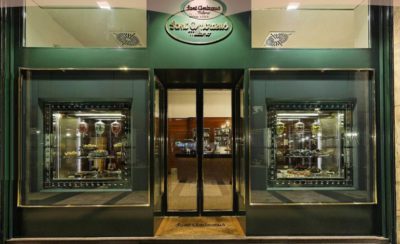 The iconic Milanese restaurant-pastry shop Sant Ambroeus in Corso Matteotti, a stone’s throw from the central Piazza San Babila, has been acquired by the Sant’Ambroeus Hospitality Group (SAHG), a premium catering group active in the USA through the Sant’Ambroeus, Casa Lever and Felice brands (see the press release here).

The group is based in the USA but has all Italian roots, since it was founded in 2003 by the Italians Gherardo Guarducci and Dimitri Pauli. The two were later joined by Jacopo Giustiniani, founding partner of the Felice brand. The Milanese pastry shop will be controlled through the newco SAHG Milan.

The deal was structured by the London-based platform Atypical Partner, specialized in alternative assets, founded by Mauro Moretti, part of which is Three Hills Capital Partners (THCP). The latter had already invested 35 million dollars in SAGH in September 2020 (see here a previous article by BeBeez). In the food retail sector, Three Hills also has the casual dining chains Wagamama and Byron Burger in its portfolio.

Simonetta Festorazzi Langé, the historic owner of the restaurant-pastry shop Sant Ambroeus, was the seller  and will remain as brand ambassador, while Giulia Farinelli, ceo of SAHG, will also manage the Milanese business.

Founded in 1936 by Teresa Cattaneo, Sant’Ambroeus was then acquired by the Pauli family, who in 1982 opened the brand’s first restaurant in New York on Madison Avenue. In 1987 the Pauli family then decided to focus only on the activity in the USA and sold the Milanese business to the real estate developer Franco Festorazzi, who at the same time had just bought the entire building in Corso Matteotti 7. Sant Ambroeus closed FY 2020 with revenues of 1.6 million, a negative ebitda of 653k euros and a net financial position of 221k euros (see here the analysis of Leanus, once registered for free).

Mrs. Festorazzi Langé told Corriere Milano: “The Sant Ambroeus in Milan will grow even faster. We will extend the evening hours, you can have dinner. And I will remain to ensure that everything works, especially now that international customers too. they are coming back. It will remain an elegant place, a model, as it has always been, of high quality Italian catering”.

Gherardo Guarducci, Executive Chairman and co-founder of the SAHG group, said: “This acquisition brings the prestigious Sant Ambroeus brand, synonymous not only with Milanese style but also with Italian excellence, into a single group spanning between the United States and Europe. Sant Ambroeus was born in Milan and is carried on by all those who work every day to confirm the uniqueness of its brand. Today, we embark on a new adventure, starting from the arcades of Corso Matteotti in Milan where everything began more than 90 years ago.”

Giulia Farinelli, ceo of SAHG, commented: “It is an honour for me to lead this new phase of a historic brand like Sant Ambroeus. With its future renovation process, we will ensure that the brand remains a landmark for the people of Milan and beyond. I am very pleased that I will be able to collaborate with such a strong team upon my return to Milan, a city which I left after studying at Bocconi.”

Mauro Moretti, Partner and Investment Committee Chair of Three Hills Capital Partners, added: “We are very excited to see the Sant Ambroeus brand reunited under the same company; it was one of the key pillars of the business plan developed with Gherardo and the rest of the SAHG management team to bring their unique model and operating capabilities to the European market after the fantastic job they have done in North America to position Sant Ambroeus as a lifestyle proposition. This was also possible thanks to the constructive and strategic approach to the deal by Mrs Simonetta Festorazzi, who has bought into the vision of building something truly unique on a global basis”.

Founded in 1936, the Sant Ambroeus pastry shop has the primacy of the Milanese panettone together with Cova, owned by the luxury giant LVMH since June 2013, acquired for 32.8 million euros, and Marchesi, which has been part of the Prada Group since March 2014 .