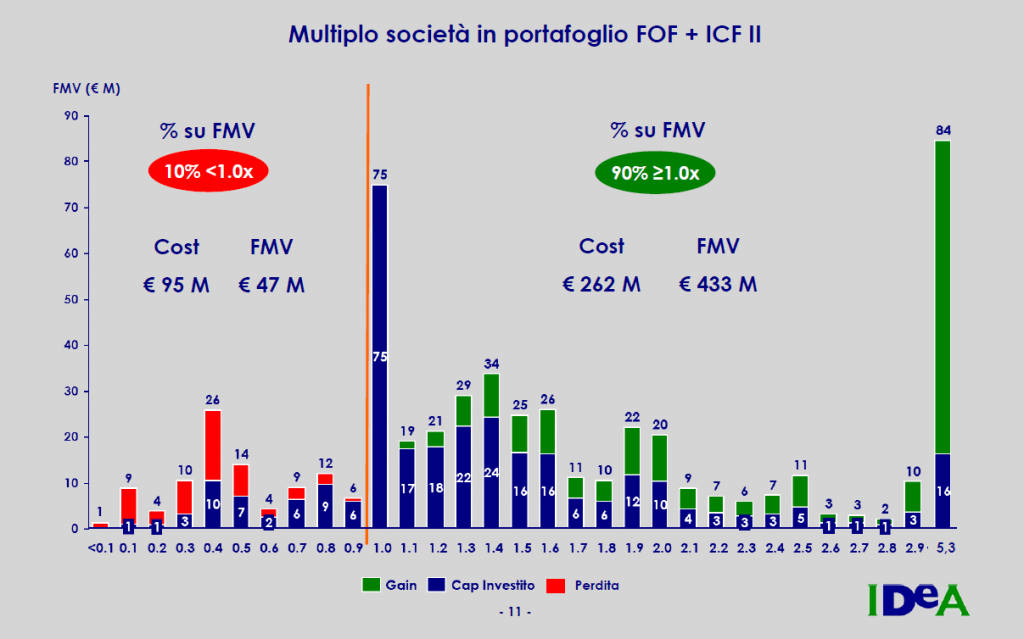 Italian Private equity operator Idea Capital Funds sgris working with Italian mid-size banks to a project similar to the one put forward by  Kkr and Alvarez&Marsal for Unicredit and IntesaSanpaolo banks (see a previous post of BeBeez), MF-Milano Finanza wrote last Saturday May 17th. The project will be active in 2015.
Idea Capital Funds sgr is owned by Gruppo De Agostini and manages 1.4 billion euros of assets, 26 pct of which having been invested by Gruppo De Agostini itself.
More in detail, problem and restructured loans and hybrid capital instruments will be put together by mid-size banks in a unique pot in order to be managed through an industrial restructuring process by Idea Capital Funds sgr. One of the funds will target industrial corporates’ credits and will have a 500 million-1 billion euros size; while the other fund will target agricultural scetor credits with a 300 million euros size. The latter fund will be proposed to Unicredit and IntesaSanapolo too as agricultural credits won’t be a target of the fund being structured by Kkr and A&M.
Credits will be versus a common group of debtor companies in order to reach for each company a credit exposure giving banks the strenght to influence companies’ governance and push forward an industrial restructuring process supported by new equity injection.
“New equity will be injected by third investors who will subscribe stakes in the the new  funds managed by Idea sgr”, ceo Mario Barozzi said. “Credit contributions from the banks will represent a 70-75% stake in the funds whil new equity will be a 25-30% stake, New equity will have priviliged treatment in the fund (i.e. drawdowns will be paid before)”, Barozzi concluded.
In the meantime Idea Capital is raising its Taste of Italy fund (see a previous post of BeBeez) targeting Italian companies in food&beverage sector from base ingredients towards restaurants. The fund has a 200 million euro target and by next July a 75 million euros first closing will be announced (but maybe the fund will have reached 100 million euros of funds raised by that date). The final closing is expected by mid-2015. The fund will be advised by an Investment Committee made by Italian entrepreneurs  of the food&beverage sector, such as Oscar Farinetti, Eataly’s founder (see a previous post of BeBeez), who was one of the key note speakers at ldea Capital Funds sgr’s Investor Day last May 14th in Milan.
The third Idea Capital’s private equity fund of funds, Idea Capital Funds III , just reached a 110 million euros fist closing ona a 250 millions target. This is new kind of fund as its asset allocation might be structured on investors’ preferences.  Subscribers might acquire stakes in the core fund or overweight or underweight some exposures (i.e. emerging markets, US or credits or distressed assets) by subscribing stakes in one of the satellite funds. Stakes of the core fund have been subscribed by some private investors too as  Fondo Idea Crescita Globale by Italian asset management Fideuram sgr‘s network. Subscriptions have been for 55 million euros.
As for the two previous funds of funds, “the 44 funds we acquired had an average 12-13% Irr each and this was thanks to the fact that value of their portfolio companies was more than the invested capital in 90pct of the cases”, managing director Funds of Funds Franco Mosca said. “And in some cases we had portfolio companies that have a 5.3x value today with respect to the invested capital”.
Finally some news are expected in few weeks on the investment target of GreenItaly1, the first Italian tematic Spac (Special purpose acquisition company) focusing on green economy. GreenItaly1 has been listed on the Italian Stock Exchange last January after having raised 35 million euros, Idea Capital Funds sgr having subscirbed a 10pct stake with its Idea Efficienza Energetica e Sviluppo Sostenibile fund.
On the divestments side, coinvestment fund Idea Opportunity fund (vintage 2008) has started divestment of Telit Communications, an Italian company listed on Aim London market that offers communication wireless solutions machine-to-machine. Idea fund subscribed a 9.3 pct stake in Telit’s shareholders capital in 2011 at  80 pence per share. Today Telit quotes around 200 pence and Idea have sold a 15pct of its stake already and keeps on selling.
Next divestment will be the stake in  Corin Group, a British company delisted for the London Stock Exchange by a group of Italian investors (and Idea was among them) in December 2012 who supported a buyout by Stefano Alfonsi, former ceo of Italian LimaCorporate, one of the leading manufacturer of orthopedics prothesis.
Idea Capital Funds sgr won’t launch any new coinvestment fund then, but will go on coinvesting with other funds through its funds of funds. For example its last coinvestment in Betty Blue, the company owner of Elisabetta Franchi fashion brand, has been conducted by Idea Crescita Globale fund together with Trilantic fund.