Ardian signed an agreement with Montepaschi bank to acquire a portfolio of 28 real estate properties (see the Ardian press release here and the one by Mps here). The price is said to be  just under 350 million euros. In the coming weeks, the parties will enter into a preliminary property purchase contract, followed by the definitive one within the second half of this year.

Advisors of the deal for Ardian were NCTM who followed the legal, tax and administrative part, Studio Gattai, Minoli, Agostinelli Partners and the Law Firm Gattamelata e Associati for administrative due diligence and REAAS for technical and environmental due diligence. Montepaschi was assisted in the transaction by Duff & Phelps as real estate advisor, by Legance and by the FRM Tax Law Firm.

Montepaschi’s decision to put the properties on the market dates back to Spring 2018 when Duff & Phelps Reag had already been given a mandate (see here a previous article by BeBeez). The sales process was then started in February 2019 (see here a previous article by BeBeez). Initially there was talk of a one billion portfolio, then of 500-600 million euros and finally the perimeter of the sale was further reduced. The auction started in July 2019 and closed on 18 November, when rumors of bids in the order of 300 million euros were already circulating (see here a previous article by BeBeez). Those interested in taking over the Mps’s properties included numerous funds, including Blackstone, DeA Capital Real Estate sgr, Apollo, Varde, Cerberus, Partners Group, Starwood, Bain Capital, Oaktree and Lone Star. But this month Ardian had come up with exclusivity in the sales process. 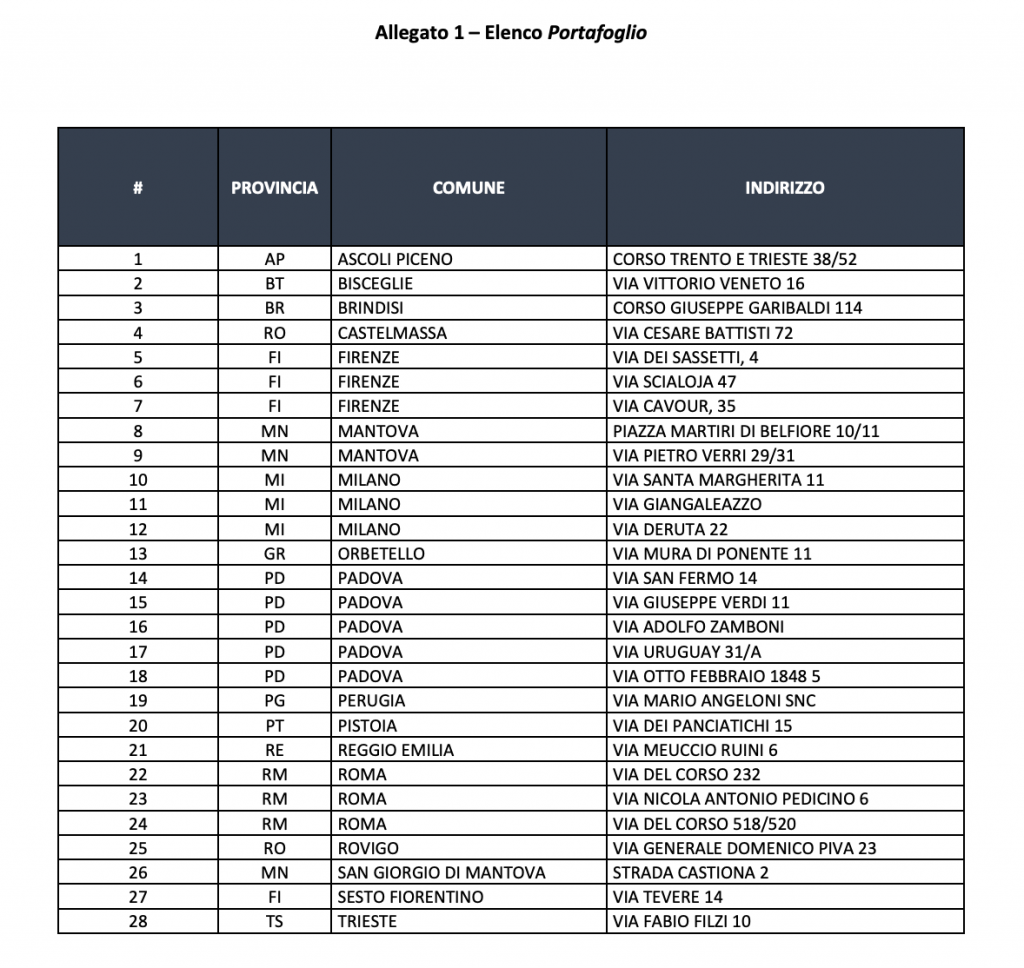 Rodolfo Petrosino, Ardian Real Estate senior managing director Southern Europe, commented: “We are very pleased to have been awarded such an important property portfolio, which has some unique trophy assets. Our investment in Italy in the real estate sector rises to around one billion euros and places us among the most active operators in the Italian market. We have already invested a lot and will continue to select the most interesting opportunities in the core-plus / value-added real estate segment ”.

The properties purchased by Ardian are mainly for office use, for a total area of ​​approximately 90k square meters. The assets are located mainly in Milan, Rome, Florence and Padua (see the complete list in the table on the left). They include 5 historic buildings of great value and historical value, such as: the Milanese headquarters in via Santa Margherita 11, a few steps from Piazza della Scala, whose facade was designed by the architect, designer and urban planner Luigi Caccia Dominioni; Palazzo Alinari in Florence; Palazzo Rondinini, in Rome in via del Corso, which connects Piazza Venezia to Piazza del Popolo. Ardian will now take care of the redevelopment of the properties, in order to enhance the current office and retail use destinations.