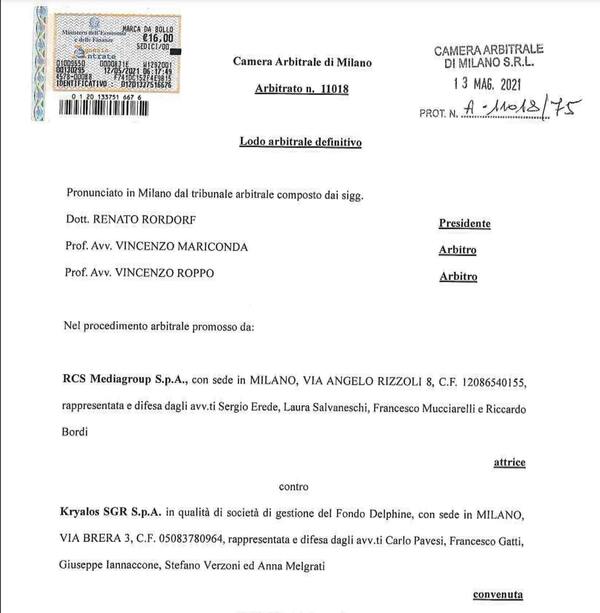 The Milan Arbitration Chamber agreed with Blackstone in its final ruling on the dispute with Milan-listed RCS Mediagroup in relation to the transaction that in 2013 had led to the sale and simultaneous lease of the RCS real estate complex in Milan in Via Solferino / Via San Marco / Via Balzan, headquarters of the Corriere della Sera newspaper, for 120 million euros (see here the text of the arbitration ruling and here the press release by RCS).

We recall that the acquisition of the real estate complex by Blackstone was conducted through a series of funds, including the Delphine fund managed by Kryalos sgr. Blackstone then entered into negotiations in the Summer of 2018 to sell the real estate complex to the Allianz group for a price that is said to be more than double that paid to RCS (about 250 million euros), but in November 2018 the negotiations stopped precisely because Urbano Cairo, in the meantime taking over the control of RCS (see here a previous article by BeBeez), had asked the Arbitration Court of Milan to ascertain the nullity of the 2013 contract.

RCS, in fact, had branded the negotiation with Kryalos as seriously unfair, because, according to the reconstruction in the ruling, “unbalanced to the detriment of the seller, whose consent have been conditioned by the very serious economic and financial difficulties in which at that moment it was incurring”.

Blackstone for its part also in November 2018 sued RCS to the New York Court (see here the filing to the Court) saying that, should Allianz renounce the purchase, Blackstone is ready to ask for compensatory and punitive damages also for the damage of image right away. Blackstone has filed a brief of over 30 pages claiming damages of up to 100 million dollars. Threshold that could rise further, also due to any reputational damage that the US fund could raise (see here a previous article by BeBeez). On April 24, 2019, however, the Supreme Court of the State of New York suspended the proceedings established therein by the Blackstone funds, pending the outcome of the arbitration in Italy (see Reuters here).

In May 2020 the Arbitral Court had communicated a partial ruling (see here a previous article by BeBeez) and in particular: (i) had affirmed its competence to decide on RCS’s claims (including compensatory ones), rejecting all related preliminary and preliminary objections raised by the buyer; (ii) had ruled out the invalidity of the contracts with which the transaction was concluded; and (iii) had found that the buyer’s behavior could have given rise to compensation for damage in favor of RCS, and to this end had arranged two technical consultations to ascertain the conditions in which RCS was in 2013, as well as the market value of the property, taking into account, among other things, all the conditions of the transaction. That partial ruling seemed then to turn in RCS’s favor, but in the end things turned out differently.

In detail, in fact, we read in the conclusions of the ruling, that “the Arbitral Court rejects the requests proposed by RCS Mediagroup spa against Kryalos sgr spa and compensates between said parties for the costs of the proceedings, as paid above, acknowledging that the ruling was approved by majority vote with the favorable vote of the president Renato Rordorf and the referee Vincenzo Mariconda and with the contrary vote of the referee Vincenzo Roppo “.

More in detail, the ruling specified: “It can therefore be concluded that, albeit in a context not devoid of some ambiguity and uncertainty, sufficient unambiguous evidence has not emerged to suggest that, when the contract being discussed was stipulated, RCS was in a situation of economic or financial difficulty such as to significantly affect its ability to self-determine and therefore to integrate the requirement in this regard necessary to configure the crime of usury”.

Furthermore, again from the text of the ruling, it emerges that, according to the nominated expert, the sale price in 2013 was 33 million euros lower than the market value at the time, which would have been 153 million euros. But the press release released by RCS itself underlines that “however, the ruling does not consider this disproportion to be of sufficient importance“.

The RCS note also specifies that “the company, without prejudice to the fact that it does not share the judgment of the two arbitrators and that it reserves all judgments and all rights, underlines that even from the reasons for the ruling, no incorrectness or bad faith of RCS emerges, which vice versa has acted for the necessary protection of the corporate assets, damaged by the significant difference in value with which the property was sold in 2013”. And for this reasing, the note concludes that “the definitive ruling, confirming that RCS did not act incorrectly and even less recklessly, reinforces, like the partial one of last year, the position of the company before the Supreme Court of the State of New York (where the proceedings brought by the counterparties are suspended)”. Now then the ball goes to New York.