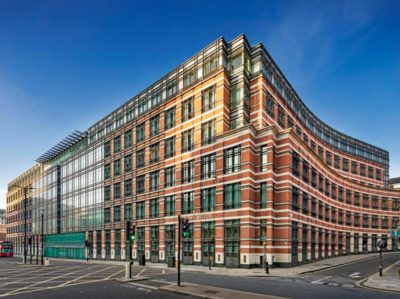 Generali Real Estate bought the Times Square office building in London from Blackstone last week. The acquisition was completed on behalf of two pan-European funds managed by Generali Real Estate: 50% of the amount was invested by the Generali Europe Income Holding fund, dedicated to core offices, and the remaining 50% by SC GF Pierre, a fund dedicated to unit linked policies of the French company Generali Vie. The transaction was financed for half of its value by a pool of banks (see the press release here).

The sale price has not been disclosed, but rumors were circulating last April regarding a valuation of around 450 million pounds, equal to an initial net yield of 4.3% (see CoStar here). Blackstone in turn had bought the building in 2015 from Land Securities, a commercial real estate giant listed in London, for 268.4 million pounds (see the press release at the time).

The acquired office building is located at 160 Queen Victoria Street, close to St. Paul’s Cathedral and the London Stock Exchange. The Times Square complex extends over 7 floors above ground plus 2 underground floors for a total of 35,000 square meters, with large terraces. It boasts the Breeam Very Good pre-certification. It is currently undergoing renovations, scheduled for completion in late 2022, and sees BNY Mellon as the main tenant. The acquisition of Times Square is in line with Generali Real Estate’s strategy of investing in valuable assets in the most important and dynamic cities of Europe, including London.

Aldo Mazzocco, head of private markets and real assets at Generali Asset & Wealth Management, explained: “The acquisition marks the return of Generali Real Estate to the London market. As part of our strategy to invest in the most dynamic cities in Europe continental and beyond, we believe that London is one of the main investment targets”.

Times Square is Generali Real Estate’s first direct investment in the London property market following the completion of the iconic One Fencourt building on Fenchurch Street, also in the City, a state-of-the-art development project completed in 2019 which houses the M&G Investments’ headquarters and won the Aia and Green Good Design Awards (see the press release here).

We also recall that at the end of September Generali Real Estate, on behalf of the Rubens real estate fund, secured a green loan of 162.5 million euros for the Libeskind Tower, the Milanese skyscraper in the heart of the CityLife business & shopping district, certified Leed Gold and entirely leased to PwC. The loan was disbursed by a pool of lenders consisting of Crédit Agricole CIB, also as agent bank, BNP Paribas Italia, also as green loan coordinator, Intesa Sanpaolo and Unicredit (see here a previous article by BeBeez).

Generali Real Estate counts 33 billion euros in assets under management and over 400 professionals (data at the end of June 2021).