The Coima RES SIIQ (REIT) stock ended last week at 9.87 euros per share, equal to a market capitalization of around 357 million euros, after the blaze that brought the stock to that price on Thursday 28 April, from 8, 20 euros on Wednesday 27, in response to the announcement of the imminent takeover bid aimed at delisting the company at a price of 10 euros per share, by Qatar Holding, a wholly owned investment veichle by the sovereign fund of Qatar, Qatar Investment Authority (QIA) (see here the press release and here the communication pursuant to art. 102 of the Finance Unique Text law, TUF).

More specifically, the tender offer will be launched by the vehicle Evergreen spa (BidCo), 97% controlled by Qatar Holding and 3% by Coima Holding, 100% controlled by Coima GP srl & C sapa, which is in turn indirectly controlled, through Coima GP srl, by Coima group founder Manfredi Catella. As an alternative to the contribution to the takeover bid of the shares at a price of 10 euros each, the offer provides for a consideration consisting of an exchange in the ratio of one newly issued, unlisted Evergreen shares for one Coima RES share brought in acceptance of the offer. This option cannot be exercised for more than 9.026 million Coima RES shares, corresponding to 25% of the company’s ordinary shares: if the number of ordinary shares tendered for the exchange offer exceeds the maximum quantity in exchange, it will be applied the allotment method. To service the exchange offer, a capital increase of a maximum of 90.266 million euros has already been approved.

Evergreen aims to obtain subscriptions equal to at least 95% of the capital of Coima RES, but this threshold can be partially waived, as long as the subscriptions are equal to at least 66.7% of the capital. The takeover bid, moreover, starts in the easiest way, given that to date the main shareholder of Coima RES is Qatar Holding (with 40.131%) while Coima group also owns a 1.4% stake: both in fact have undertaken to bring all their shares to the offer, for a total of 41.4% of the share capital.

The maximum total value of the offer, in the event that all 36.1 million Coima RES shares covered by the offer were tendered, and assuming that all subscribers exercise the option to receive the consideration in cash, would be equal to 361.07 million euros. Coima RES, following the success of the takeover bid, will be transformed into a SICAF managed by Coima sgr.

We recall that the Coima RES listing on the Italian Stock Exchange dates back to 2016, when it had raised 215 million euros from investors, also in that case at 10 euros per share and with Qatar Holding that transferred 96 properties to the SIIQ, most of which bank branches in lease to Deutsche Bank, valued at 144.5 million euros. With the capital raised in ipo, together with a leverage of 50%, the Siiq had also immediately purchased the Vodafone Village in Milan, the Italian headquarters of the tlc group valued at the time around 200 million euros (see a previous article by BeBeez). The press release of last Thursday pointed out that the 10 euro price implies a positive return for all current Coima RES shareholders. In particular, for ipo investors, also considering the subsequent dividends paid, the estimated annual average implicit return is approximately equal to 3% while for investors who entered at the minimum official price recorded after the ipo, always considering the subsequent dividends paid. , the estimated average annual implicit return is approximately 80%.

The same note explained that from the date of the ipo the growth prospects of Coima RES have been limited by the structural and persistent discount that the stock market has applied to the shares of listed real estate companies compared to the value of the Net Tangible Asset (NTA). This dynamic, amplified by the pandemic and an unfavorable geopolitical context, has limited the growth of Coima RES through capital increases, as these transactions could potentially lead to the dilution of current shareholders, a strategy excluded from the date of the ipo. The delisting of Coima RES will instead make it possible to remove this discount applied from the stock market, offering the company easy access to the capital market.

This fact, the note continued, will allow Coima RES to accelerate its growth strategy with the consolidation and completion of a complementary property pipeline, as well as the implementation of an investment program aimed at strengthening exposure to the Core Plus and Value- add and to improve the cash generation profile, leveraging the solid fundamentals of the Milan office sector and the management track record in real estate development and value creation.

At the end of 2021, the real estate assets of Coima RES were valued at 641.8 million euros (from the 688 million at the end of 2020, see here the presentation of the 2021 results to analysts). Of this total, approximately 88% is made up of offices, also considering the investment in Pirelli 32, a new office complex in via Giovanni Battista Pirelli 32 in the Porta Nuova area of Milan for 58.2 millions. The operation was announced last February (see here a previous article by BeBeez). Pro-forma, including the acquisition of Pirelli 32, Coima RES’s exposure in Milan will increase to 93% of the portfolio and exposure in Milan Porta Nuova will rise to 62% of the portfolio, with an area of over 72,000 square meters in Porta Nuova divided between 8 properties. In particular, close to PIrelli 32 there are Gioia 22 and Gioia 20. 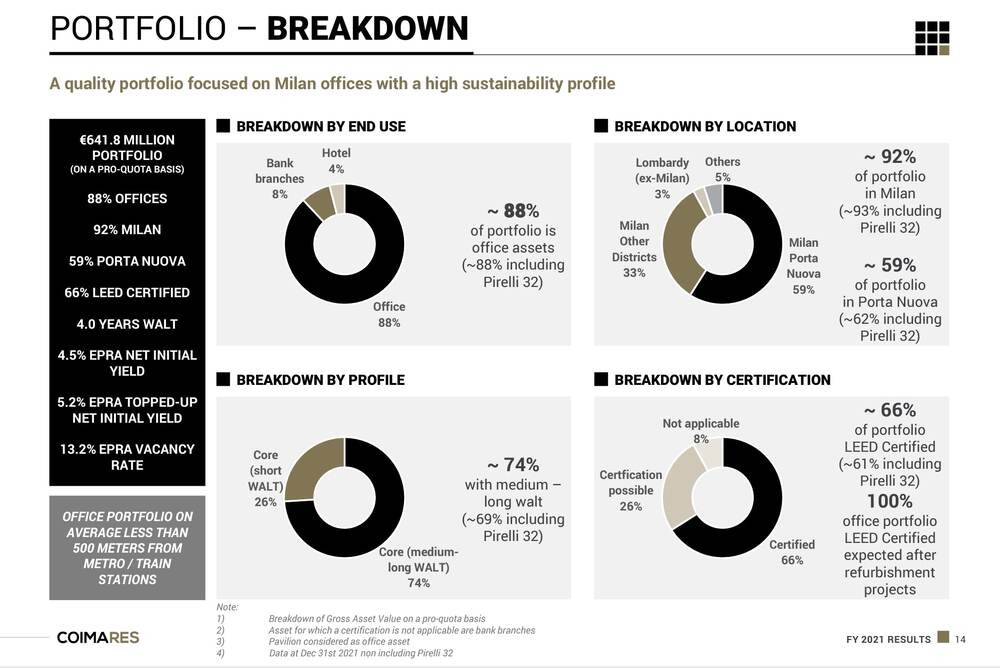