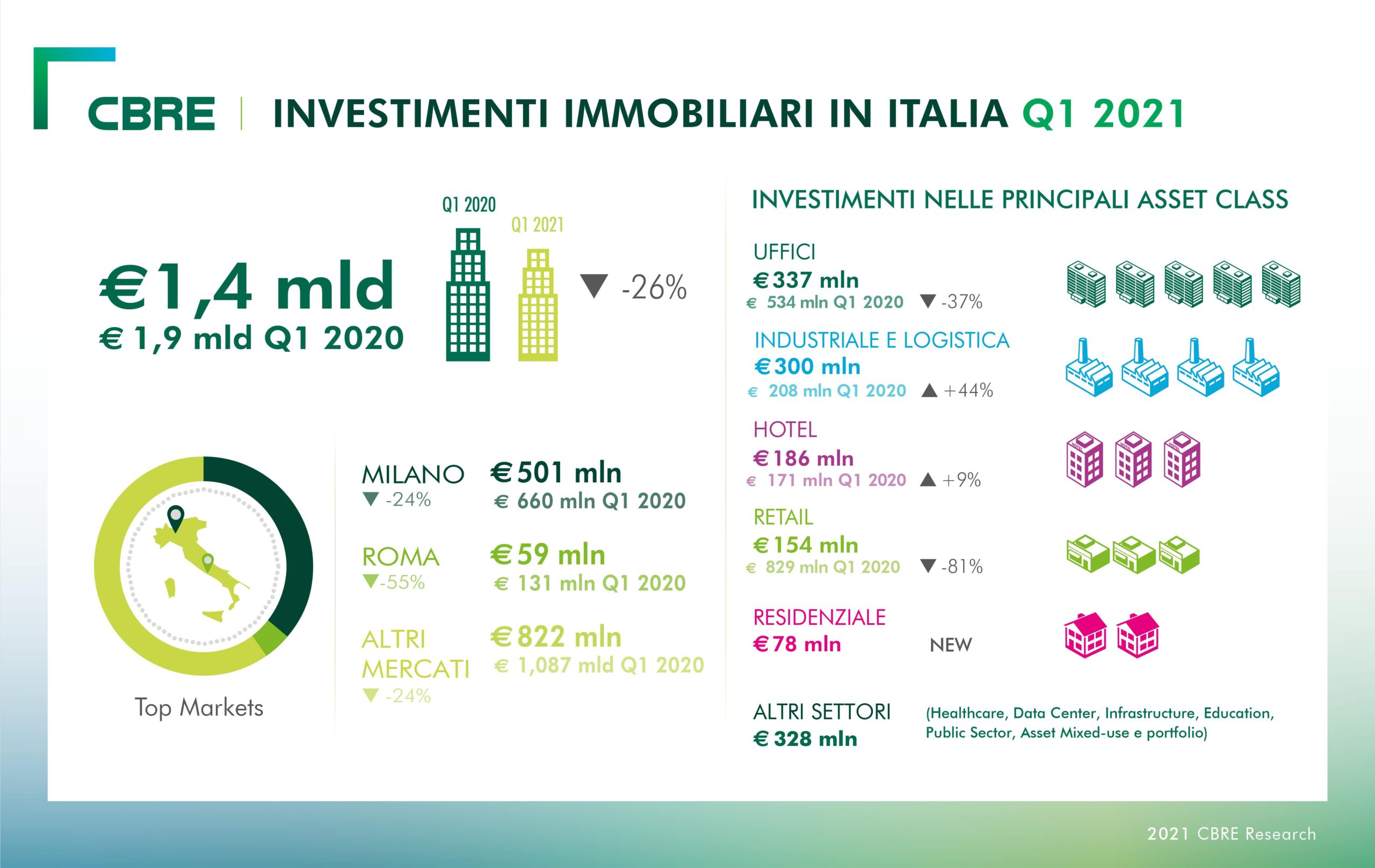 The volume of investments in commercial real estate in Italy, in the first three months of the year, amounted to 1.4 billion euros, down by 26% from the 1.9 billion in the first quarter of 2020, which was not yet large repercussions due to the Covid-19 emergency, CBRE said (see the press release here), stressing that the decline is more pronounced in the retail and office sectors, while investments in logistics, hotels and residential have increased.

A middle ground between the two surveys is instead shown by Savills‘ analysis, which calculates investments for 1.3 billion euros in the first quarter, but a 30% drop from the same period of 2020 and a 26% drop compared to the average of the first quarters of the last 5 years (see the report here). Savills, in particular, points out that Milan continues to catalyze the market with 28% of deals by value, while Rome represents only 5%. Furthermore, 74% of the value of the deals was made by foreign investors.

The decline in Italian investments is part of a European context that highlights the same trend: according to Collier, in fact, investments in the European real estate sector reached only 51 billion euros in the quarter, with a decrease of 35% compared to the first quarter of 2020, which however was the second best result of the last 10 years, although with different performances from country to country (see here the press release and here the complete report).

The data hardly coincide between the various studies, because it depends on the calculation method used. In any case, what is worth looking at is the trend and the dimensional scale, which are absolutely in line with the data mapped by the BeBeez Real Estate Report Q1 2021, (available for subscribers to BeBeez News Premium), which out of a total of 42 deals announced, calculated almost 1.5 billion euros of deals for which the size was announced or it was in any case possible to estimate. Last year in the first quarter BeBeez had instead mapped deals for 2.6 billion euros (see here the BeBeez Real Estate Report 2019-apr2020). 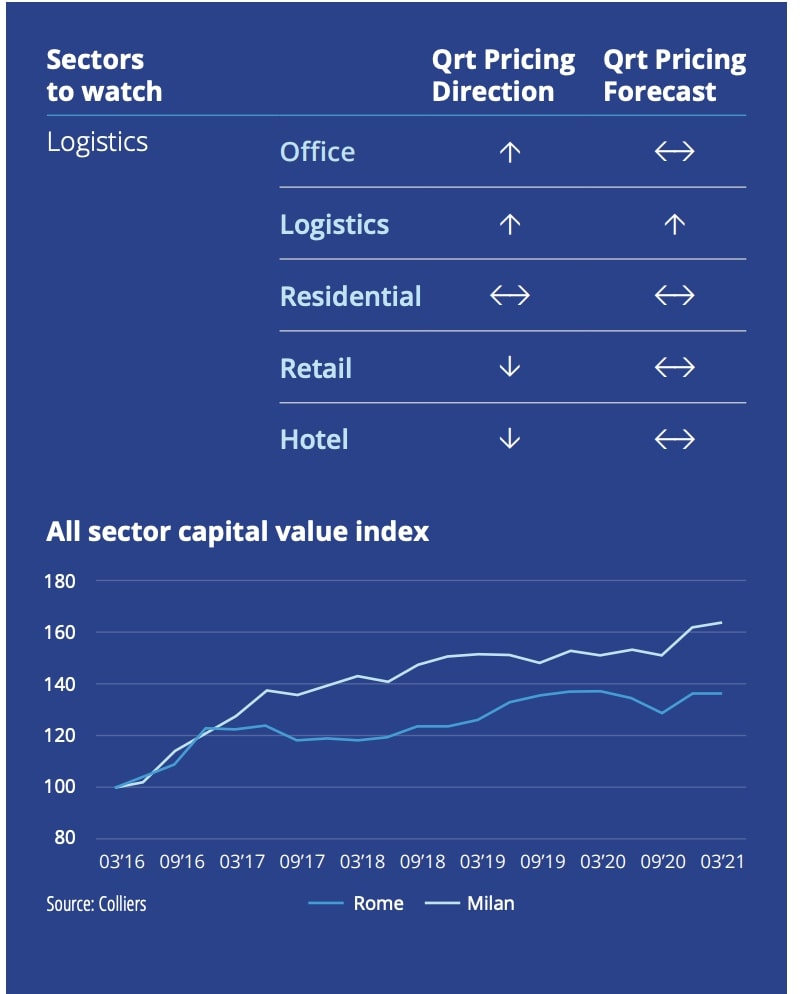 By concentrating the focus on specific sectors, CBRE calculated that the office sector closed the quarter with a volume of 337 million euros invested, down by 37% compared to the first three months of 2020. The reduction in volumes was mainly affected by the scarcity of stabilized product transactions and the slippage of the investment pipeline conditioned by the health emergency. Investors still remain cautious due to doubts about the characteristics of future demand for office space. The recovery in the demand for office space by the occupiers is in fact still limited, with Milan that in the first quarter stops at 70,000 square meters of take-up (-31% compared to the first quarter of 2020, which however had recorded, between the others, one
transaction of 40,000 square meters, which closed, inter alia, pre-Covid-19), and Rome down by 5% with approximately 25,000 square meters. According to C&W, the decline in investments in the sector was limited to 30% to around 350 million, with a take up in Milan down by 30% and in Rome down by 10%. Even worse was the performance of the sector according to Savills, which estimates a 50% drop to 297 million euros in the quarter. The yield for prime offices in the Milan CBC stands at around 3%, again according to Savills, at 625 euros per square meter per year. In Rome, however, the yield is 3.75% at 450 euros per square meter per year.

In logistics, on the other hand, according to CBRE, 300 millions have been invested, with a growth of 44% compared to the first quarter of 2020, which continues to record excellent performances. Investors’ interest in this asset class is driven by the robustness of the fundamentals of occupier demand, which in the first three months of the year absorbed over 600,000 square meters of logistics space. The growth of speculative development activities continues thanks to good results from the absorption of this type of product, with investors looking with interest at new operations in markets that have so far been little beaten, such as eastern Veneto or the Greater Rome area. In addition, there is also a growing interest in investments and developments in the South on the part of institutional investors. Logistics were also booming as for C&W, recording the best quarter since 2017, up 20% again to 300 million euros. According to Savills, however, investments in logistics even reached 385 millions, with yields of 4.75% and rents in Milan and Rome equal to 56 euros per square meter per year.

On the hotel front, investments according to CBRE amounted to 186 million euros, with a growth of 9% over the same period of 2020. Investors appear confident about a significant recovery in the hotel sector at the end of the health emergency: the search for distressed opportunities originating from the health crisis by opportunistic investors has mainly resulted in secondary asset transactions, while operations on prime properties appear close to pre-Covid-19 values ​​thanks to the shortage of products with these characteristics. In this sector, C&W even recorded a growth of 34% on its database, but the value of the investments, according to his calculations, stood at just over 130 million euros. Even less investments in the sector were for Savills, which stops at 115 millions.

The residential sector continues to be at the center of the interest of institutional investors, however the lack of products continues to limit the growth of investment volumes on existing properties, which in the first quarter of 2021, according to CBRE, are close to 80 million euros. Little more, on the 90 million euros of investments, is the calculation of C&W, which in turn believes that the sector is now well regarded by investors, especially in terms of development. For Savills, investments in the sector instead amounted to 170 millions.

Finally, the retail sector, on the other hand, is down by 81%, according to CBRE with investments of only 154 millions. The transactions recorded in the first three months of the year mainly concerned secondary assets. The interest of investors in the retail sector is in fact still limited, both because of the health crisis and because of the growth prospects of e-commerce, further strengthened by the Covid-19 pandemic. Even fewer were the investments recorded in the sector by C&W, which stops at 50 millions registering limited interest only in the supermarket, DIY and sale & leaseback subsegments. The same figure of 50 millions was found by Savills, which calculates a return on retail properties in prime positions in Milan at 3.25% with via Montenapoleone at 13 thousand euros per square meter per year, while via Condotti in Rome stands about 11 thousand euros per year.

“The first quarter of 2021 is the fourth since the start of the pandemic and therefore records a performance that is not excellent, about 26% lower than the first quarter of 2020, which in some ways can be considered a pre-pandemic quarter”,  Alexandre Astier, managing director capital markets of CBRE Italy, declared, adding: “The beginning of 2021 was still a bit subdued, but with the passing of the weeks we have seen a resumption of activities both by the occupiers, in terms of of the search for spaces, both by investors, in defining the new asset allocation and asset rotation strategies for the current year. We believe that, also in light of the progress on the vaccine front which from the third quarter onwards should allow for a gradual return to a new normal, the next few months should see a recovery in volumes in almost all sectors, but with particular regard to the logistics, residential and hotel sectors. re offices may slightly underperform due to a shortage of core product. With the abolition of the moratoriums on loans, presumably in the second half of the year, a recovery of the NPL and UTP sectors is also expected “.

On the same line, Carlo Vanini, Head of Capital Markets and Rome Office of C&W, commented: “The real estate numbers of the first quarter of 2021 followed the same trend recorded at the end of 2020 with a decrease of 35% compared to the same period of 2020. With around 1.2 billion euros in volume invested, the first quarter of 2021 was the weakest since the beginning of the Covid-19 pandemic, but also the weakest quarter since 2017; fluctuated between 1.5 billion and 1.8 billion euros in 2020 (which benefited from an extraordinary pipeline for 2019). The uncertainty of the real impact of a year of restrictive measures impacted the results (although partially offset by the government’s extraordinary financial support) together with a small pipeline from 2020 (especially in the office sector) “.

Silvio Sancilio, head of capital markets at Collliers Italia, concluded: “Although a trend of strong interest in logistics and living is confirmed, volumes in Italy are not yet high. For the Value Add offices, the moment is not yet bright and many investors are waiting for a sign of recovery and greater openness of financing. Despite this, we record large volumes of deals in progress and we hypothesize a potential recovery in volumes in the second half of the year “.