(former ceo of Unicredit) and Diego De Giorgi (board member of Unicredit and former Co-Head and then Sole Head of Investment Banking of Bank of America Merrill Lynch) will be the sponsor operating partners of a new SPAC focused on companies active in Europe in financial services, with a focus on scalable platforms, with strong potential for profit growth. SPAC’s strategic and financial sponsors are instead Tikehau Capital and Financière Agache, the holding company controlled by the luxury giant Groupe Arnault (see the press release here).

The four sponsors will collectively invest a minimum of 10% of the amount that will be raised from the investors and will undertake to enter into a substantial forward purchase agreement for further shares of the SPAC. The name of SPAC is Pegasus Europe, it will be listed in Amsterdam and it is said aiming to raise a few hundred million euros (the FT speaks of “low hundreds of millions of euros”). The transaction advisor would be JPMorgan.

The founders and investment teams of Financière Agache and Tikehau Capital have collaborated on several deals. Furthermore, an investment vehicle of Financière Agache has been a shareholder of Tikehau Capital for the past 15 years. Jean-Pierre Mustier was in turn a partner of Tikehau Capital from January 2015 to July 2016, when he then left Tikehau because he was appointed to lead Unicredit, where he worked closely with Diego De Giorgi on mergers and acquisitions and operations. on the capital markets for over a decade.

Tikehau Capital, listed on Euronext Paris, is an asset management group specializing in alternative investments, has reached 28.5 billion euros of assets under management at the end of December 2020, thus exceeding the target set at 27.5 billion announced in September 2020. A goal achieved thanks to 4.2 billion euros in net inflows from asset management, relating to the areas of private debt, real assets, capital market strategies and private equity. The group aims to exceed 35 billion euros in total assets under management in 2022 and to generate over 100 million euros of operating profit in the asset management business (see here a previous article by BeBeez). The group invests in various asset classes (private debt, real assets, private equity and capital market strategies), including through its subsidiaries active in asset management that operate on behalf of institutional and private investors. Controlled by its managers together with some leading institutional partners, Tikehau Capital employs over 570 people (as of 30 June 2020) in its offices in Paris, London, Amsterdam, Brussels, Luxembourg, Madrid, Milan, New York, Seoul, Singapore and Tokyo.

Tikehau Capital opened the Milan office in 2015 and currently has 15 employees. Italy is the second most important market for the company after the French one. Initially Tikehau was active in private debt and real estate, while on the private equity front it has been active since September 2018 (see here a previous article by BeBeez).. The company last week appointed Edoardo Crotta as Director Real Estate Italy. The latter will report directly to Luca Bucelli, Head of Italy, and to Frédéric Jariel and Pierre Vaquier, co-managers of the Real Estate area. Mr. Crotta will be responsible for the development of the Group’s real estate investments in Italy, thus strengthening the origination and execution platform of Tikehau Capital at the local level (see here a previous article by BeBeez). 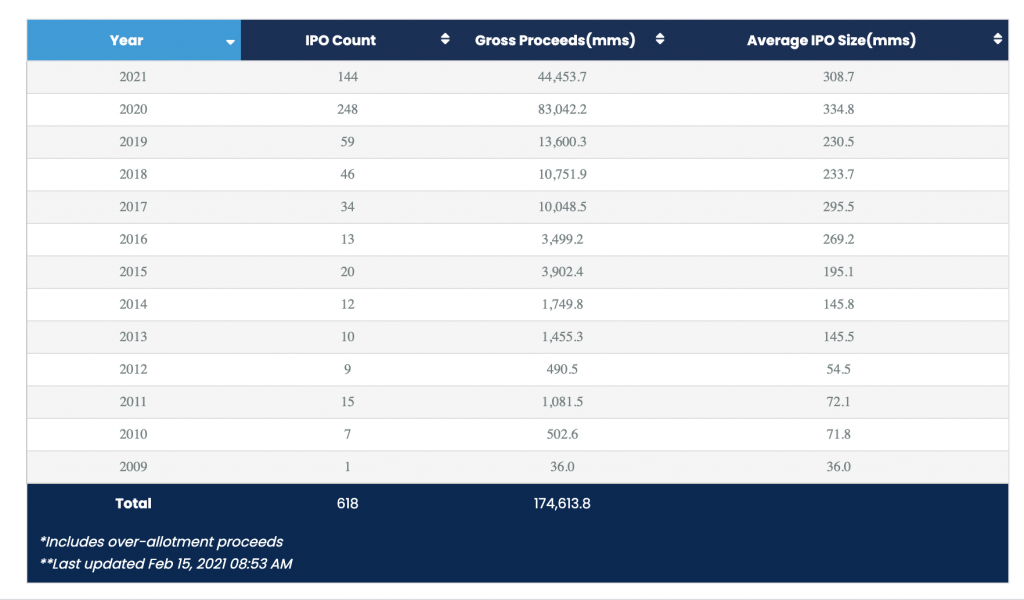 La raccolta delle SPAC negli Usa – Fonte: SpacInsider.comThe SPAC boom then continues, moving from the United States to Europe, because the factors that pushed big names in private equity and international asset management to launch their SPACs in the US in 2020 are also found now in Europe and in Italy (see here a previous article by BeBeez). In particular, there is a lot of capital committed to alternative funds, but not yet invested, the so-called dry powder of private equity funds, which at the end of December 2019 was estimated by Preqin to be around 1,500 billion dollars globally.

The volatility of the financial markets in 2020 due to the Covid-19 pandemic was very high and ipo prices are by definition affected by this volatility, while the price set for a business combination is immune to it. Many companies, therefore, have given up the traditional ipo path and preferred the one offered by SPACs. Also because the aim of the SPACs is above all to raise additional capital to provide post-merger operational liquidity. These factors have led to a number of well-known investors and hedge fund managers in the US becoming promoters and sponsors of SPAC. We are talking about giants like SoftBank, KKR, Carlyle, Bain Capital, Apollo, Cerberus and even Richard Branson’s Virgin Group. Which according to SPAC Insider have raised a total of well over 83 billion dollars spread over 248 IPOs in the US in 2020, while this year we have already reached 141 listed SPACs which have raised over 44 billion dollars.

Now it was rumored that the long wave from the US  is also coming in Europe, after a series of SPACs listings promoted by European sponsors but listed on Wall Street. Among these, there are some with an Italian soul. In fact, three of the SPACs that have recently landed on Wall Street have an Italian origin. There is Investindustrial Acquisition Corp, listed on the NYSE; promoted by Investindustrial, founded by Andrea Bonomi, which in November raised 402.5 million dollars, including the over-allotment option, and which, by virtue of a forward purchase agreement signed by the sponsor on other shares for 250 million dollars, reaches the firepower of 652.5 million dollars. Then there is ScION Tech Growth I, promoted by ION Investment Management, the group founded by Andrea Pignataro specialized in financial information (among other things, it controls Dealogic and the Acuris group, publisher of Mergermarket), which went public in mid-December , after having raised $ 500 million from investors, and could raise another $ 75 million after exercising the over-allotment option. Not only. Also in this case, a forward purchase agreement will be signed under which the sponsor will purchase other shares for 100-300 million dollars, in order to bring the Spac to reach a maximum firepower of 875 million dollars. Finally, Luca Giacometti, Alberto Recchi and Alberto Pontonio also listed the Spac Americas Technology Acquisition Corp on the NYSE last December, which raised 115 million dollars, with the support of the sponsor Fifth Partners, a private equity firm based in Dallas, in Texas. A little more than a year ago Giacometti, Recchi and Pontonio had listed Galileo Acquisition Corp, a Spac that had raised 138 million dollars at the time, also with the support of Magnetar Capital, another US private equity. The latter Spac already has a first attempt at a business combination to its credit, albeit unofficial, since it has been in talks with the well-known modeling agency Elite Model World of the Italian entrepreneur Silvio Scaglia and his wife Julia Hatt.

Meanwhile, the first European SPAC of 2021 was listed in Amsterdam in recent days. It is ESG Core Investments BV which has raised 250 million euros to invest in the majority stake of high-growth companies in North-Western Europe that have a core business with a clear ESG orientation. The sole sponsor of SPAC is Infestos Sustainability BV, a private equity company specializing in sustainable investments.