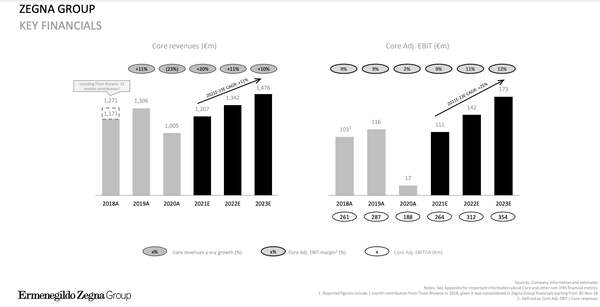 The Zegna family will receive 546 million dollars at closing of the Ermenegildo Zegna Group‘s business combination with Investindustrial Acquisition Corp. (IIAC), the SPAC sponsored by Investindustrial and listed on the NYSE last November, after having raised 402.5 million dollars from investors (see here a previous article by BeBeez).  The figure emerges in the folds of the long investors presentation published yesterday by IIAC and discussed on the occasion of a conference call that explains the details of the operation, which had not yet been explained in the press release released yesterday morning (see here a previous article by BeBeez).

In detail, the presentation now reads that, again in the event of zero withdrawals, the capital available for the operation amounts to a total of 2.432 billion dollars, considering 1.554 billions represented by the residual stake of the Zegna family in the group’s capital. The remainder, as already known, is represented by the approximately 403 million of SPAC’s liquidity; the 250 millions of the PIPE (Private Investment in Public Equity) agreement signed by a group of institutional investors, prominent names in the luxury industry, members of the Board of Directors and top management of the company; and finally the 225 millions of the forward purchase agreement signed with Strategic Holding Group sarl (SSH), an independent investment vehicle of the Investindustrial VII fund, as already announced at the time of the listing of the SPAC. Of the approximately 880 million dollars of new capital at the service of the operation (sum of 403, 250 and 225 millions), there will be 546 million in so-called “secondary proceeds”, which will be paid to the Zegna family, which at that point will remain with a 62.2% stake in the group, while Investindustrial, under the forward purchase agreement, will have 11.3% and the market (ie the former shareholders of the SPAC and the investors of the PIPE) will have the remaining 26.5%. 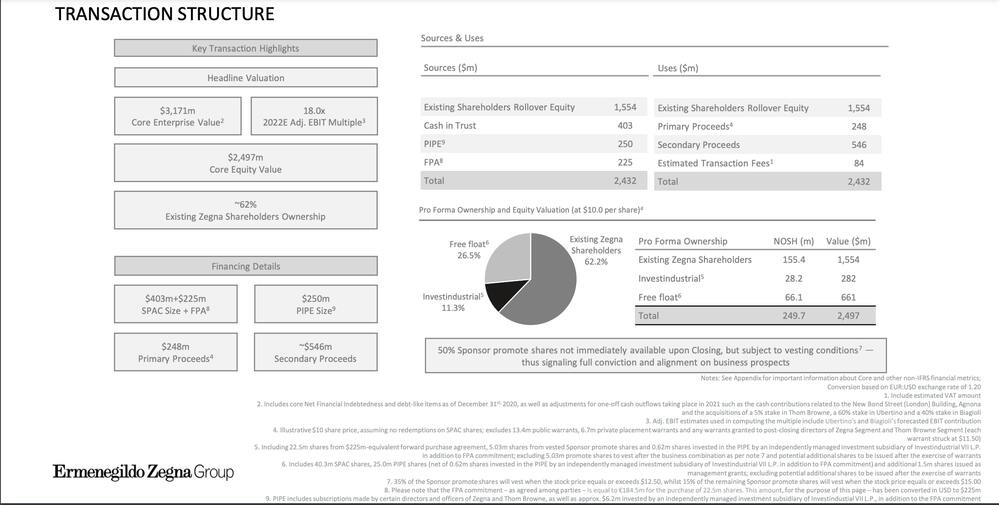 Based on the transaction value, we recall that the merged entity will have an expected initial enterprise value of 3.2 billion dollars with an expected initial market capitalization of 2.5 billions, assuming zero redemptions by current IIAC shareholders. The proposed enterprise value implies a multiple of 18.1x the expected 2022 ebit and is to be compared with the higher average multiples at which the comparables run. For example, Kering laps at 19.4x and LVMH at 24.1x, while Brunello Cucinelli even reaches 44.8x and Prada at 37.2.

Finally, it should be noted that the filing to the SEC that illustrates the operation also specifies that first of all the Zegna group will conduct a cross-border conversion, transferring the headquarters from Italy to the Netherlands and transforming itself into a Dutch public limited liability company.