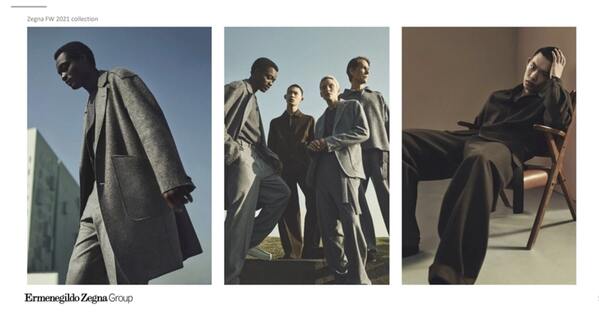 Ermenegildo Zegna NV arrives today at the NYSE, with a market capitalization of 2.4 billion dollars and an enterprise value of 3.1 billions (see the press release here), after the business combination with Spac Investindustrial Acquisition Corp (IIAC) concluded last Friday 17th.

The announcement of the listing date was made last week after the shareholders’ meeting of the Spac (see here a previous article by BeBeez), which gave the green light to the operation announced last July. So, however, let us remember that, assuming zero redemptions by the shareholders of the Spac, a market capitalization of 2.5 billions and an enterprise value of 3.2 billions had been hypothesized (see here a previous article by BeBeez).

On the occasion of the shareholders’ meeting last December 15th, the shareholders of the Spac asked for redemptions for a total of approximately 23.37 million Class A ordinary shares. But  those redemptions were widely awaited for by the Spac’s promoters and infact that’s why they had already organized for a plan B and found another 125 million dollars of commitments from large institutional investors and other investors (among which there is also said to be Patrizio Bertelli, Prada’s ceo and co-founder) who signed a new PIPE (Private Investment in Public Equity) contract for 12.5 million Zegna ordinary shares at 10 dollars per share (see here a previous article by BeBeez).

We recall that IIAC had raised 402.5 million dollars from investors at the end of November 2020 (see here a previous article by BeBeez) and that on the occasion of the announcement of the business combination with Zegna in July, the signing of a first 250 million  dollars PIPE was also announced as well as of a forward purchase arrangement of 184.5 million euros (approximately 219.5 million dollars), subject to adjustment (in fact the final amount is now 217 million dollars) signed by Strategic Holding Group sarl (SSH), an investment vehicle of the Investindustrial VII fund, in turn one of the promoters of Spac.

Taking into account the redemptions, 169 million dollars were raised for the deal from the Spac, so in total the resources raised for the operation were  761 million dollars, gross of transaction costs and the purchase price of the shares of the Zegna family, with the latter who now maintains a 66% stake  in the group down from 100%  (it would have been 62.2% in the event of zero redemptions). 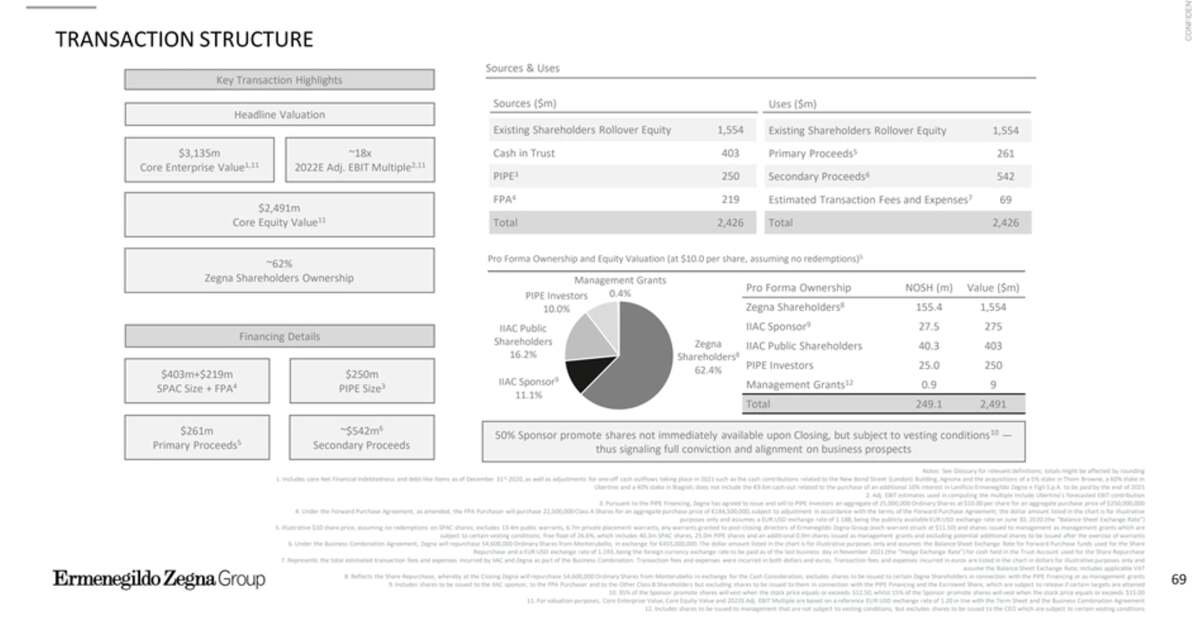 The structure of the operation as expected at the end of November,
before the announcement of the second PIPE

UBS Investment Bank acts as exclusive financial advisor to the Ermenegildo Zegna Group and co-lead placement agent on the PIPE, while Sullivan and Cromwell act as legal advisor. Deutsche Bank, Goldman Sachs Bank, JP Morgan Securities and Mediobanca are financial advisors to IIAC, with Deutsche Bank, Goldman Sachs and JP Morgan Securities also being co-leads in the placement of the PIPE. Mediobanca provided the fairness opinion to the IIAC Board, while Chiomenti and Kirkland & Ellis are the legal advisors of IIAC and Shearman & Sterling are the lawyers of the placement agents.

Meanwhile, the Zegna group closed the first half of the year with revenues up by 50% compared to the first six months of 2020 at 603.3 million euros, an adjusted ebit of 66.8 millions against a negative ebit of  52 millions in the same period of 2020 and with a profit of 32.2 millions against a loss of 86.7 millions. All with a net financial debt of 73.3 millions from only 6.7 millions at the end of 2020 (see here a previous article by BeBeez). These are numbers, therefore, which, assuming a similar trend for the second half of the year, would effectively lead to reaching the targets set for the end of the year by the group, i.e. consolidated revenues of 1.2 billion euros (from 1.005 billions in 2020 and from 1.306 billions in 2019), an adjusted core ebitda of 264 millione (from 193 millione in 2020 and 282 millione in 2019), an adjusted ebit of 111 millions (from 24 millions and 112 millions) and a net financial debt of 84 millions.

Ermenegildo Zegna, ceo of Zegna Group, commented: “Today marks a monumental milestone for Zegna and is the beginning of an exciting and pivotal new chapter in our 111-year legacy. What began as a wool mill built by my grandfather has now become a publicly traded, modern luxury group with a oneof-a-kind manufacturing platform, sophisticated digital operations and global scale and reach. We are well positioned to accelerate the successful strategies of the Zegna Group’s two core brands, Zegna andThom Browne, while also continuing to build upon our heritage, our ethos of sustainability, and the unique craftsmanship that has made our name synonymous with excellence and luxury around the world. We will continue to meet our clients’ changing needs while working to attract new, younger clients through exciting collaborations and digital innovation across the Group”.

Mr. Zegna continued: “I am very happy with the Zegna Group’s performance. Our enhanced focus on our legacy brand, the strengthening of our luxury textile platform and the dynamic pace of Thom Browne have supported a strong recovery this year, which has accelerated over the summer and continues today with solid growth in revenues relative to the same period of 2020. At the end of November 2021, the Group’s worldwide performance year-to-date is substantially in line with pre-COVID-19 levels. We are confident in our ability to further strengthen our leadership position in the global luxury market while keeping sustainability and care for the people around us at the heart of everything we do. Today’s announcement unlocks the doors to a brighter future – while we continue to follow our own path.”.

Andrea C. Bonomi, Founder of Investindustrial and Chairman of the Industrial Advisory Board, added: “We are thrilled about the encouraging feedback we have received, as well as the positive reaction to the business combination with Zegna from the markets, investors and the financial community. This excitement is evidenced by the amount of capital that has been raised to support the transaction, as well as by the participation of major institutional investors. Since the very beginning we have strongly believed in this partnership, and we are ready to work together and support Zegna in the future to continue its unique history of growth, craftmanship, heritage and sustainability.”.

Sergio Ermotti, Chairman of Investindustrial Acquisition Corp., concluded: “During recent months, the transaction has garnered strong interest from the investment community as demonstrated by the excellent participation we had at roadshows and at our Analyst Day on November 23, 2021. IIAC believes in the strength of this business combination, and we are excited about our partnership with Zegna”.