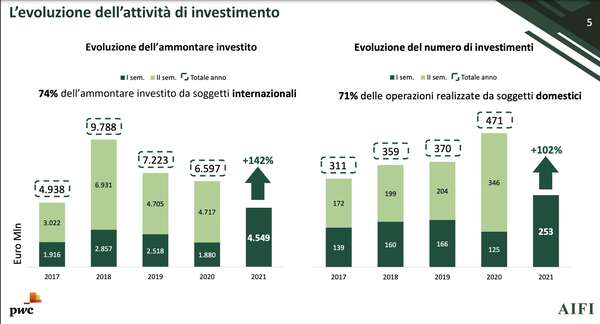 There has been a great recovery of private equity and venture capital activity in Italy in the first half of 2021, both on the investment side and on the fundraising and divestments side. It emerges from the semi-annual report of AIFI, the Italian Association of Private Equity, Venture Capital and Private Debt, in collaboration with PwC, presented yesterday to the press by AIFI’s chairman Innocenzo Cipolletta and managing director Anna Gervasoni, and by Francesco Giordano, partner of PwC Italia Deals (see here the press release and here the entire presentation).

This is a picture of recovery that was already emerging from the BeBeez Report on 6 months of Private Equity 2021, published last July, and from the BeBeez Report on 8 months of Venture Capital 2021, published last August (both available to BeBeez News Premium and BeBeez Private Data subscribers). However, we recall that BeBeez‘s data differ from those of AIFI, because BeBeez considers private equity and venture capital activities in a broad sense and therefore the investments and divestments made by all market players, therefore not only by structured funds, but also investment companies, companies already owned by funds, club deals of private investors, Spac, corporate venture capital, business angels and crowdfunding platform crowds.

The recovery of investments in Italy is part of a very marked trend of recovery in private equity activity at a global level. Already Bain & Co in its latest report indicated that in the first six months of the year just buyout funds alone invested 539 billion dollars in the world, a figure that is equal to the average invested in the last 5 years not in six months, but in a whole year. If the pace continues like this, the estimate is that this year we will be able to reach the ceiling of the one trillion dollars of buyout deals, well above the previous record of 804 billion marked in 2006, when the sector had reached its peak, before the global financial crisis (see here a previous article by BeBeez). And also in Europe, according to PitchBook, the private equity funds in the first six months of 2021 have already announced 3824 deals, a figure almost equal to that of the whole of 2020, while in terms of value, the total of operations stood at 342, 2 billion euros, equal to 81.5% of the total for the full year 2020 (see here a previous article by BeBeez).

Returning to AIFI data, private equity and venture capital funds in the first six months of the year invested 4.5 billion euros, which is a figure 142% up from the 1.9 billion euros figure of the first half of 2020, impacted by the crisis Covid-19, but also 81% up from the first half of 2019, preceding the pandemic. Year 2020 had obviously been a very bad year for the sector, with investments that had fallen by 9% to 6.6 billion euros (see here a previous article by BeBeez) from 7.2 billions in 2019, a figure which actually also showed a collapse from the record of 9.8 billions in 2018 (see here a previous article by BeBeez). Instead, 2021 is on track to be classified as a record year in a positive sense: only in 2016 a higher value was reached in terms of amount invested in the first half of the year.

As for the number of transactions, it stood at 253, in turn up 102% compared to the first part of 2020 (125 investments) and 52% compared to the first half of 2019. Also is worth noting, commented yesterday Francesco Giordano, partner of PwC Deals, that “the investments by international players amount to 3.4 billion euros or 74% of the total and testify how private equity can be a very important driving force in attracting foreign investments”. And Anna Gervasoni, general manager of AIFI, added that “this interest is also visible as international private equity funds return to Italy not only with investments, but also with offices to be permanently present and because they see an interesting potential in our country”. This is a clear reference to the openings of the Milan offices just announced by the German funds DBAG (see here a previous article by BeBeez) and Aurelius (see here a previous article by BeBeez).

In detail, the early stage segment (venture capital investments in companies in the first phase of their life cycle, seed, startup, later stage) grew by 314% in amount (294 million euros) and by 61% in number of operations (129). The buyout (acquisitions of majority or totalitarian stakes) recorded an increase of 22% in amount (1.9 billion) and 204% in number (70). The expansion (minority investments in capital increases aimed at the growth of the company) attracted 299 million euros (compared to 31 million in the first half of 2020), spread over 23 transactions (+ 64%). As for infrastructures, investments have grown significantly, exceeding the buyouts in terms of amount (2 billion euros), while the number of operations stood at 25 (compared to 7 in the same period last year). .

It should be emphasized that in the period under analysis 5 transactions were carried out characterized by an amount exceeding € 150 million, 2 of which concerned the infrastructure sector. Always on the investment side, from the point of view of the size of the companies, once again the companies with less than 50 million in turnover, which represent 72% of the total number (89% in H1 2020). As regards the sectoral distribution, in terms of number, 72 operations were carried out in the ICT sector (28% of the total), in the industrial goods and services sector 45 (18%) and in the medical sector 27 (11%). Finally, in terms of geographical distribution, 69% of the 242 transactions carried out in the first half in Italy were carried out in the North (167 investments), 21% in the Center (51) and the remaining 10% in the South and Islands, which totaled 24 investments. At the regional level, in line with previous years, Lombardy ranked first both in terms of the number of transactions (95, equal to 39% of the total), and of the amount invested (1.2 billion euros, 27 %). 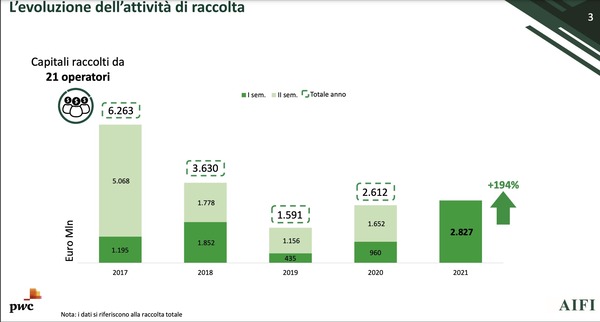 Finally, there was a real boom on the fundraising front. The results of the analysis made by AIFI, in collaboration with PwC Deals, show in fact that the first part of the year recorded an overall fundraising (on the market and captive, i.e. from the parent company) of 2.827 billion euros, an increase of 194% compared to H1 2020, thanks to some significant closings. Moreover, already in 2020, fundraising had increased by 64% to 2.612 billion euros from 1.591 billions in 2019, which had however been the year of negative record on the fundraising front since 2016. The main sources of funding were: pension funds and pension funds (35%), banks (16%) and the public sector (10%).

“The recovery of the economy also sees the contribution of private equity which with the growth of investments e operations, especially expansion, demonstrates how important the role played by investors is
even in this delicate moment”, Innocenzo Cipolletta, chairman of AIFI, said, but also stressed:” We need more action to attract Italian and international capital that thus multiply the opportunities for our companies”. At a geographical level, in fact, as much as 95% of the capital came from domestic investors, accentuating the trend already highlighted last year, when throughout 2020, deposits from foreign investors represented only about 10% of the total against an average of about half in previous years. As for the investment target, the funds were raised to invest mainly in infrastructure (42%) and in buyouts (41%).