Boom of divestments in 2014 by Pe funds in Italy. Irr grows 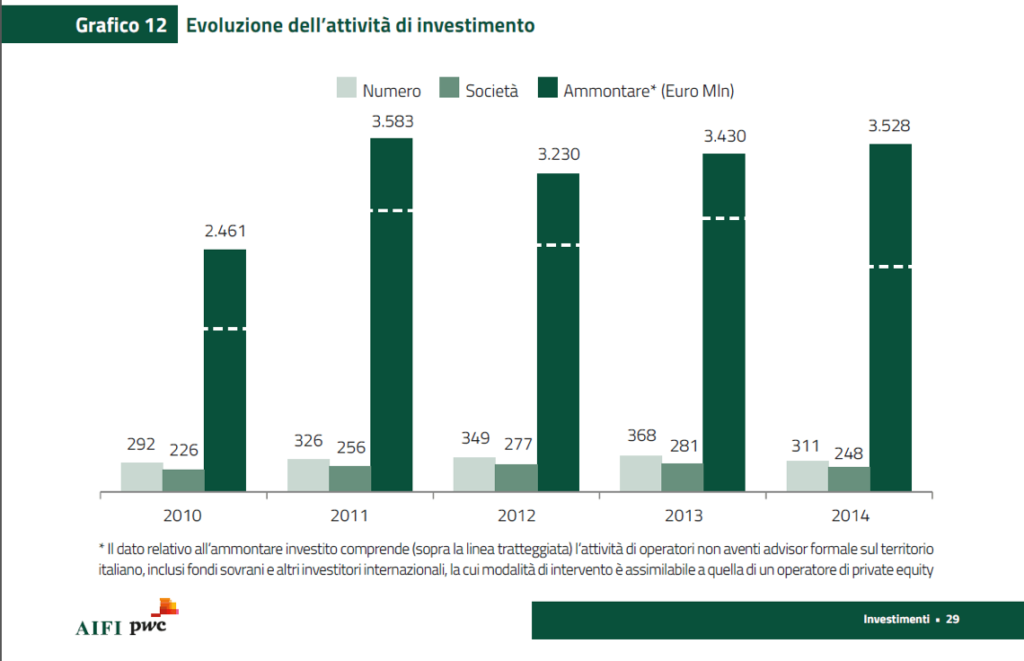 Private equity firms have been very active in 2014 in Italy with growing investments and many divestments. Fundraising on the contrary is still rather difficult for Italian firms. These are in brief the results of the annual survey by AIFI, the Italian Association of Private Equity and Venture Capital firms, which had been presented some weeks ago by AIFI’s chairman, Innocenzo Cipolletta, and managing director, Anna Gervasoni (see here AIFI’s presentation).

Data which had been elaborated by PwC for AIFI, showed that last year private equity funds invested 3.53 billion euros in equity overall (just a little bit more than the 3.43 billions invested in 2013) in 248 companies (down from 281 companies in 2013) in 311 different deals (from 368 deals). The real news is that 1.9 billion euros out of the total invested equity came from international private equity firms, with a 39% increase from 1.37 billions invested in 2013.

As for the preferred sectors, 24% of the equity invested (i.e. 856 million euros) were committed on the fashion business (where fashion here includes textile sector, fashionwear, casualwear and luxury) which catalized much more capital thatn industrial goods and services (19% or 663.3 millions), food&beverage (15% or 529.6 millions), financial services (11% or 529.5 millions) and energy&utilities (5% or 173. millions).

And even if fashion and luxury is considered without textile sector, it still leads the preferred sectors list, with 679.5 millions invested (i.e. 20% of the total). The biggest deal had been the acquisition of a 20% stake in the capital of Versace by Blackstone for a total consideration of 210 million euros in February 2014  (see a previous post by BeBeez).

As for  turnaround deals, just 8 were closed in 2014 ,only  3 more than the 5 closed in 2013, even if the invested equity grew to 97 millions from 3 millions. On this issue Deputy Minister for Economic Development, Claudio De Vincenti, in his speech at the AIFI’s presentation last March said that  the Italian Government wants to help turnaround funds to operate in Italy and is preparing in these days a decree which is to make it operative a measure introduced by the so-called Investment Compact Decree of last january aiming at promoting a new investment company aiming at investing in Italy’s struggling companies which still have a good chance to recover their business. The newco will be capitalized by institutional investors and some of the shares might benefit of Italy’s Government guarantee  (see here a previous post by BeBeez). 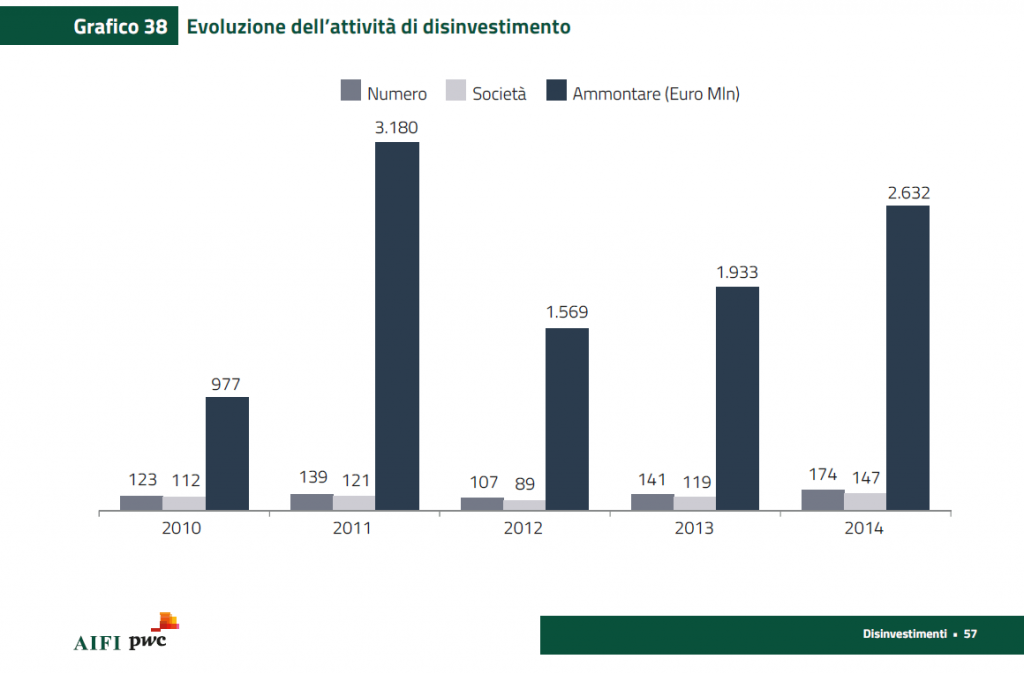 Very high interest had been shown by industrial acquirors: 44% of all divestments in terms of value and 38% in terms of number had an industrial subject as an acquiror. Write-offs also were quite down in 2014.

On the contrary fundraising was a problem. Italy’s non captive private equity firms raised 1.35 billion euros in 2014 (twice the 623 millions raised in 2013), but data include also the committement obtained by Fondo Strategico Italiano, who obtained 500 million euros from Kuwait’s sovereign fund KIA. Which means that without that, capital raised would have been 848 millions. Captive funds also raised 129 millions. 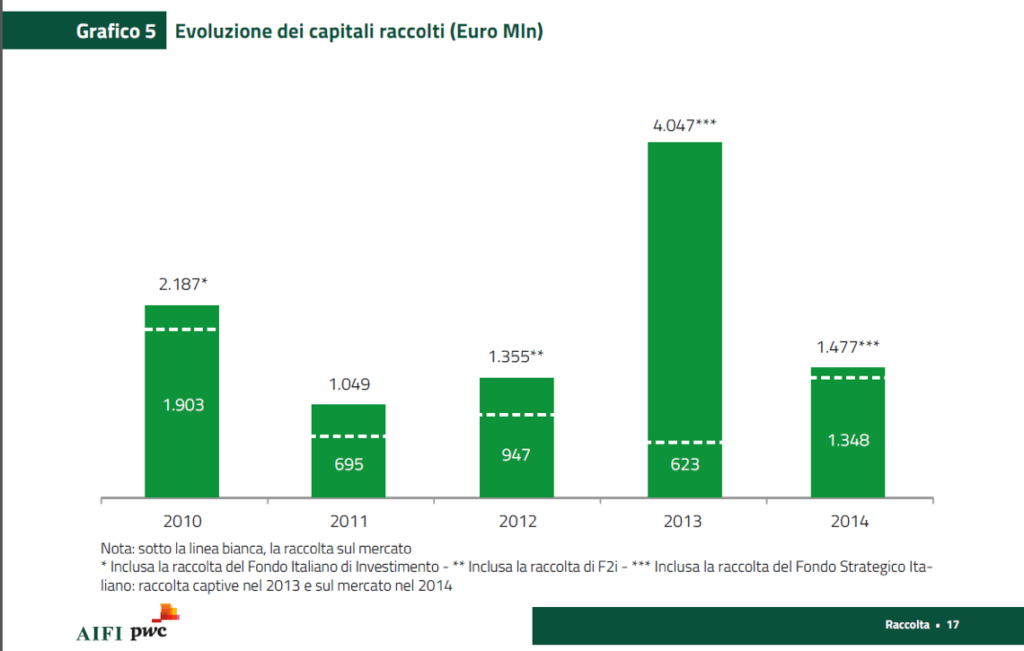 Another significant data is that out of the all capital raised, 922 millions (68%) came from international investors.  While Italian pension funds still not invest in this asset class.

Kpmg and AIFI do not provide data on single deals, but the biggest and more profitable deals of 2014 are quite weel known. See ipos of Anima sgr (by Clessidra) and Cerved (by CVC Capital partners) or the sales of Camfin (by Clessidra to Russia’s Rosneft),  Poltrona Fraus(from Charme to US’s Haworth) and Octotelematics (by Charme to Russia’s Renova).

However other divestment stories were quite profitable even if less popular in the media, such as sales of Pixart (by Alcedo sgr to US’s Vistaprint) and Millefiori (by Assietta Private Equity sgr to US’s Jarden).