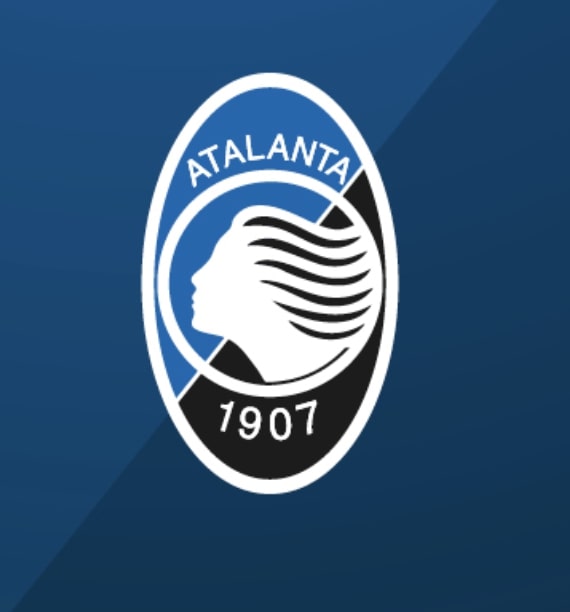 Carlyle’s global credit unit is leading a consortium of lenders who are structuring a private debt package to support the acquisition of a 47.3% stake of Italy’s Atalanta Serie A soccer club by a club deal of investors led by Stephen Pagliuca, managing partner and  co-owner of the US Boston Celtics basketball team since 2002, as well as co-chairman of US private equity firm Bain Capital (see here a previous article by BeBeez).  Bloomberg wrote (see here a previous article by BeBeez).

This was just the last deal in a row made by private equity investors on European soccer clubs and cpmes after that CVC Capital Partners officially announced the signing of its big deal on Spanish La Liga at the beginning of last February (see here a previous article by BeBeez). Actually LaLiga Group International is officially born, the newco to which the Spanish football league has transferred its commercial activities, of which CVC Capital Partners owns 8.2%, and which will coordinate the Boost LaLiga project (see here the press release ). We recall that the agreement on the Boost LaLiga project was signed last December 2021 by LaLiga and CVC, through its CVC Fund VIII (see the press release here), after a large majority ratification of the General Assembly with 37 clubs out of 42 who had voted in favor (see the press release here). The agreement, which values the entire La Liga at 24.25 billion euro, will bring a total of  1.994 billion euros into the coffers of LaLiga and clubs, which will be used for technology, innovation, internationalization and sporting growth initiatives.

Between 1990 and 2019, 184 private individuals, families, or consortia have purchased more than a 10% stake in Big 5  European clubs. This makes up 83% of all new ownership interests during that period, while the other 43 significant investments were from corporations, listing on public exchanges and from institutional investors (see here the Tifosy report on M&A in football). Funds initially began investing in European soccer clubs in 2006 when three institutional investors purchased roughly a third of PSG in French Ligue 1, before consolidating to two in 2009 and selling to the sovereign fund Qatar Sports Investments over 2011 and 2012. More recently, funds have taken positions at Bordeaux and Lyon. Manchester City of the Premier League have taken investment from a Chinese fund consortium led by CMC and CITIC, before selling a stake to Silver Lake in 2019. While in Italy funds and private investors’ consortium have invested a lot especially from US investors: we saw deals in FC Inter, AC Milan, AS Roma, and in many more clubs (see here a summary at the end of this article by BeBeez). 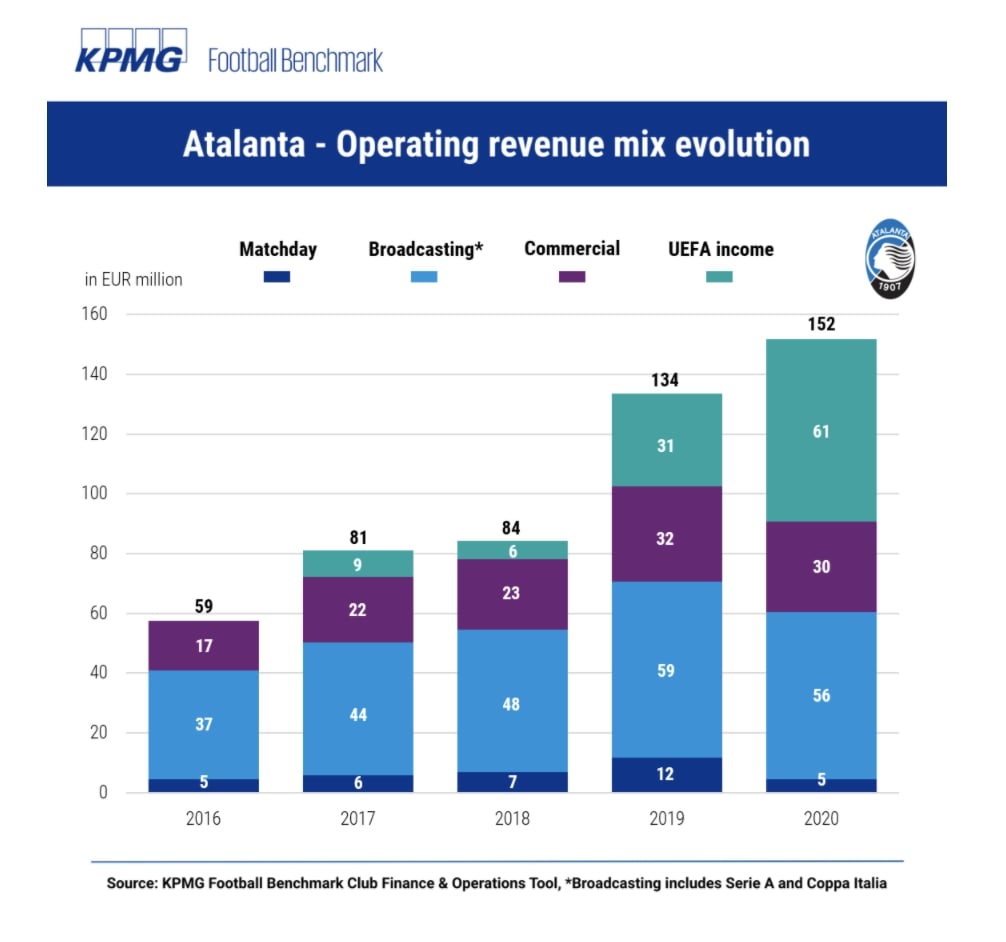 Coming back to the Atalanta deal, we recall that the deal was made on the basis of an enterprise value of over 400 million euros as the soccer club had closed FY 2020 on Dec 31st with 242 millions in revenues (from 118.6 millions in 2019), with an ebitda of 133.6 million euros (from 79.9 millions) and a net profit of 51.7 millions (from 26.5 millions). Compared to 2016, Atalanta’s total operating revenues almost tripled by the 2020 financial year (see KPMG report here). While annual matchday, broadcasting, and commercial revenue have been growing steadily (8.3%, 7.0%, and 4.7% respectively), a majority of the increase in revenue has come from Atalanta’s recent success on the pitch outside of Italy’s Serie A. Over the past 4 seasons, Atalanta have twice qualified for the UEFA Europa League before being promoted to the UEFA Champions League. The additional income from competing in the highly followed UEFA leagues, especially the Champions League, has spiked dramatically, going from making up 0% of Atalanta’s total operating revenue to over 40%. This reduces the revenue gap with traditional big clubs that have consistently competed in this league play. Despite dropping back down to the Europa League this season, the team has continued to perform well recently qualifying for the round of 16 draw of the Europa League finals and made it to the quarter finals of the Coppa Italia.

While Atalanta was able to record increasing profits over the past two years, the majority of other European football clubs did not share the same fate throughout COVID. This includes the eight champions of Europe’s most prominent leagues as is detailed in KPMG’s 2022  “The European Champions Report”.

FC Bayern München was the only club to retain their domestic title and the only club included in the analysis to record a profit, although slightly less than the year prior. This makes 29 consecutive profitable years, representing one of the best management models in the history of European sports. Despite increasing staff costs along with decreasing overall revenues, Bayern managed to keep their staff costs-to-operating revenue ratio at 58%, the lowest amongst these 8 clubs.

In their most successful season to date, Manchester City FC not only registered annual growth in their total operating revenues but surpassed their income of the last pre-COVID season (2018/19). In addition to winning the Premier League and the Carabao Cup, the club more importantly reached the UEFA Champions League final for the first time in club history which highly contributed to their revenues rebounding.

FC Inter also registered year-on-year growth in total operating revenues but recorded a net loss of 245.6 million euro in 2020/21, the highest ever by an Italian football club. This is mainly due to matchday revenue loss, growing operating costs and low income from player trading activities. They are still far from the historical net loss record of 481.3 million euros suffered by FC Barcelona last season.

French champions LOSC Lille saw a drop in total operating revenue year-on-year; however, their revenues during the past 2 seasons during the pandemic were their highest recorded. Reaching the UEFA Champions League group stage in 2019/20 and the UEFA Europa League in 2020/21 led to these improved financial performances despite a staff costs-to-operating revenue ratio of 106%, the highest amongst the eight champions.

Trending in the opposite direction is Turkey’s Beşiktaş JK who recorded a net loss of 44.4 million euro, almost half that of the previous period. In this case, the improvement in revenue came from a 48% year-on-year decrease in staff costs.

Netherland’s AFC Ajax and Portugal’s Sporting CP are both experienced a decrease in operating revenues as well as a moderate rise in staff costs, leading to a rising staff cost-to-operating revenue ratio and a declining bottom line result.

In addition to a club’s net profits, their players’ valuations are also a key discussion point regarding financial stability. Instead of delivering consistent income to the club, players profits are achieved on that players’ disposal. As the clubs with the lowest aggregate net transfer spend, income sustainability is highly dependent on constant profit from the selling of players. These smaller teams act as “net-sellers” and develop young talent on their team to sell to “net-buyers” who fall on the other end of the spectrum.

Player’s market values have also been affected by COIVD due to liquidity shortages. Because of the decrease in purchasing power, clubs are often being forced to sell their high-ticket players at a discount or are prevented from renewing contracts with players who had agreements close to expiry, negatively impacting their market values. However, during the second half of the pandemic, from January 2021 to January 2022, the aggregate squad market value of the eight European league champions bounce back to just 5% below the latest pre-COVID value. 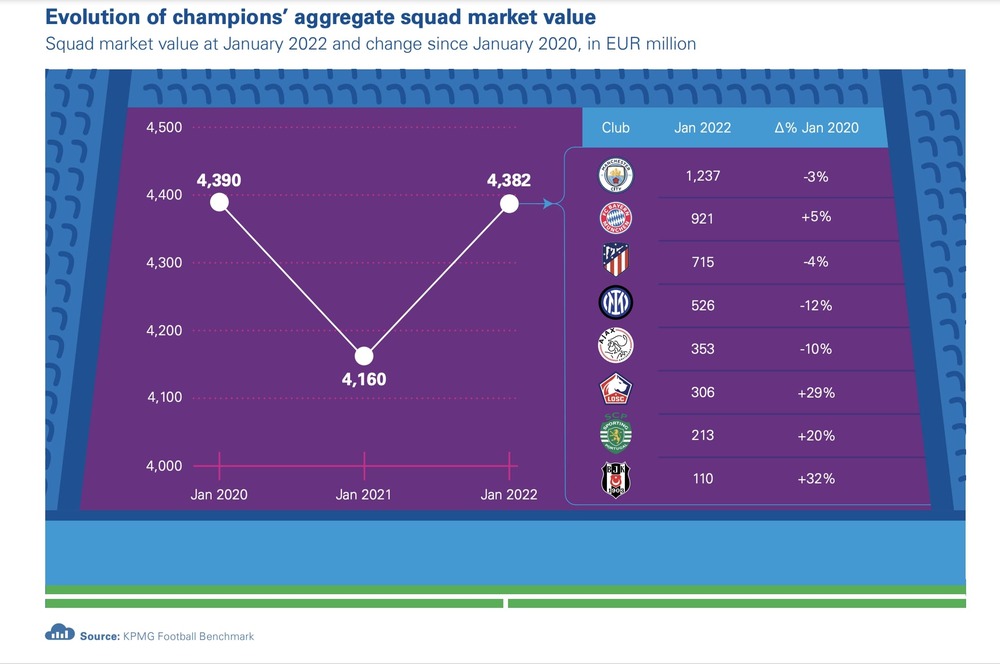 While half of the eight champions experienced a decrease in their aggregate squad market value (enterprise value), the worst being FC Internazionale (-12% at 526 million euro), the majority of the increase in player value came from the three lowest valued squads. Beşiktaş JK, LOSC Lille, and Sporting Clube de Portugal, with a cumulative EV less than nearly half of Manchester City, all posed EV increases of between 20% – 32%. These smaller teams, similar to the likes of Bergamo’s Atalanta, are likely to see these numbers continue to stay positive as their teams continue to perform well, expand their limited fan base, and stadiums return to full capacity.

On the other side of the spectrum is Manchester City. While having the highest squad value of any football club, their social media following of 98 million makes up just 15% of the Premier League due to its high competitiveness. Man City is just one of three clubs to hold a squad market value over the 1 billion euro threshold along with other Premier league teams Chelsea FC and Manchester United FC.

Making up the smallest percentage of their leagues followers is LOSC Lille, whose 4 million followers make up just 2% of Ligue 1 clubs. Being in the same league as Paris Saint-Germain with 143 million, they make up the majority of the rest of the league.

By analyzing the factors that go into a team’s values, such as their operating revenues, EV values, and their social media following in relation to their league, private investors can evaluate clubs as potential investment opportunities. The investment in Atalanta has promise for growth in all of these categories. Their revenues have been positive for the past 5 years and are only growing from the team’s success across the UEFA leagues as well as Serie A. Compared to the other top Italian clubs, the Bergamo-based team accumulated the highest aggregate profit of 129 million euro from 2016 to 2020, while AC Milan had the lowest with -615 million.

Additionally, they are a team that is known for growing and developing their players. Last year, Atalanta sold 18-year-old Amad Diallo to Manchester United, who joined Atalanta’s academy at the age of 13, for a reported 19 million pounds. Two years ago, they sold Dejan Kulusevski to Juventus for 35 million euro after acquiring him for only 3.5 million euro in 2016. Finally, with a small following across all social media platforms there is a lot of potential for growth, and they are on that trajectory. With just under 1 million total followers 1 May 2020, they grew 50% to 1.5 million followers in just 1 year. Taking all these factors into account along with the recent influx of cash into the team from Pagliuca and his investment team, there is a bright future for Atalanta FC, Italian soccer, and investment into European soccer as a whole.

Nicholas Miller contributed to this article