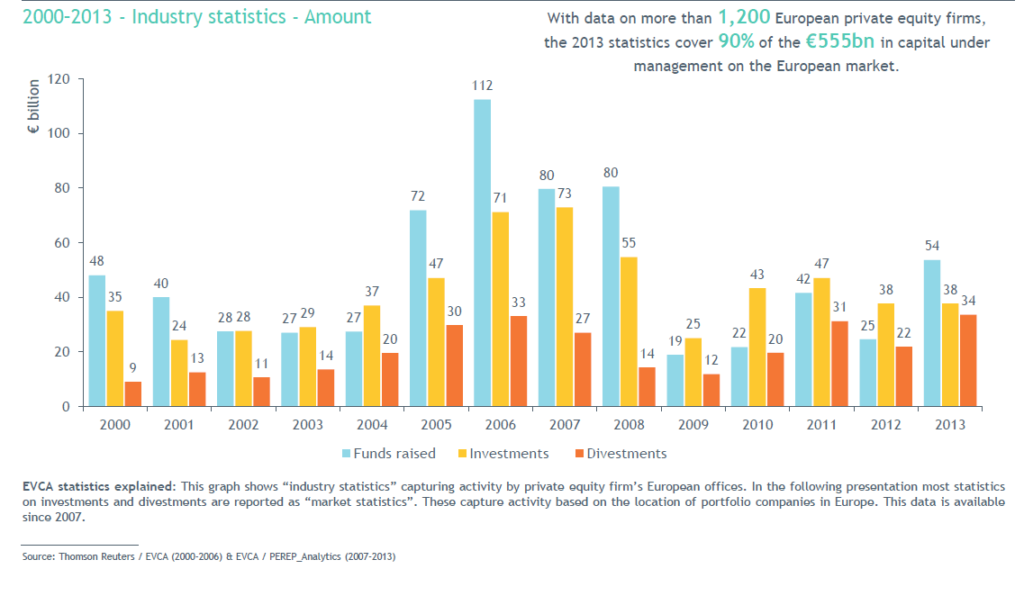 In 2013 the total fundraising of 53.6 billion euros was more than twice the volume of 2012. This increase was driven by buyout funds of which 12 funds raised more than 1 billion each and represented 66% of the total fundraising.  Equity investments decreased by 3% to 35.7 billion euros, but the total amount of venture capital invested had increased by 5% to 3.4 billion euros. More than 3,000 companies were venture backed. Finally a total of 2,290 European companies were exited representing former equity investments of 33.2 billion euros. The number of companies increased by almost 10% while the amount divested at cost increased by 54%.
These figures were published yesterday by EVCA, the European venture Capital Association (download here the report). Starting form next year, EVCA and the main European associations will use a common database, so that data will be homogeneous and comparable across countries: today, in fact, EVCA statistics on single countries are in some cases very different from the data released by the national associations.
To overcome this problem, the national associations and EVCA founded a new company, called European Database Cooperative headquartered in Germany, which will be in charge of collecting data from all the national association and build an European database using a common standard. The company is led by an Executive Board (AIfi’s general manager Anna Gervasoni represents Italy) and by an Operational Board which members are the associations’ chief economists (head of Aifi’s research, Alessia Muzio, represents Italy). Representatives from the different associations will gather next May 15-16 in Milan in Aifi’s headquarter to discuss the operative steps.
The central issue with EVCA data is that the sample analyzed is different from AIFI, and the European association collects data from its members, some non members and public sources.
Moreover, EVCA uses two different kind of analysis: market statistics are an aggregation of figures according to the location of the portfolio company, whereas industry statistics are an aggregation of figures according to the country of the private equity firm’s office in charge of the investment. In this case, if a paneuropean fund headquartered in London does not have an office in Italy and acquires an Italian company, this deal is attributed to UK and not to Italy. That’s why EVCA data say that in Italy private equity funds invested just 1.1 billion euros in 2013 while Italian association Aifi says that investments were 3.4 billion euros.
For sure, the new database will reduce this problems, making it easier to produce European statistics and compare county data.