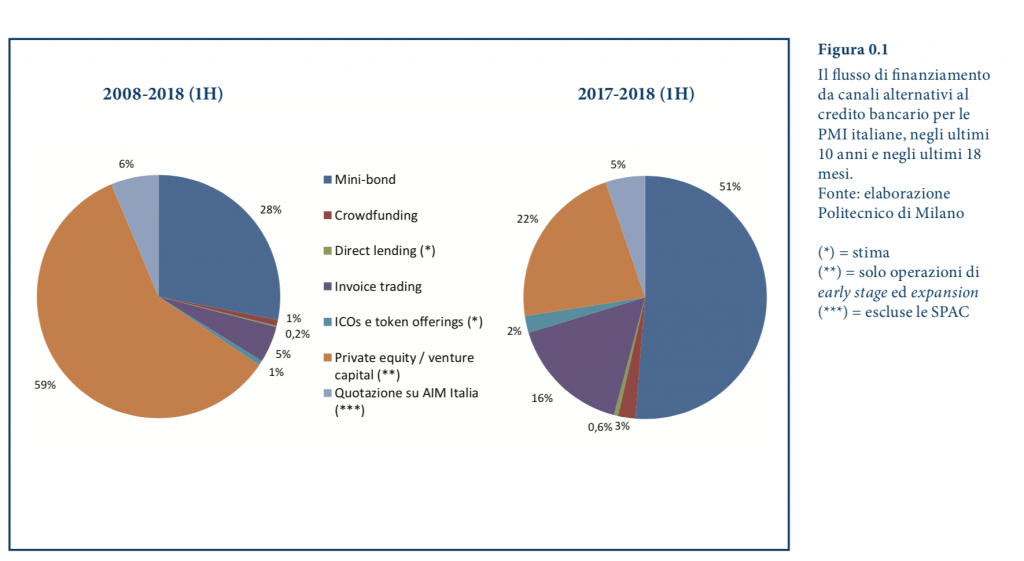 Italian SMEs raised 3.5 billion euros from alternative investors in 18 months from Jan 1st 2017 till June 30th 2018. The figure comes out from the Entrepreneurship & Finance Observatories of Milan Politecnico’s School of Management, which presented their first Research report about alternative finance in Italy, coordinated by Professor Giancarlo Giudici and drawing a complete picture of the market in Italy.

More in detail, companies which took advantage of alternative finance in italy in those 18 months were 1800. The major source of capital raised was the socalled “minibonds” or small size bond (tilll 50 mln euros) issued by non-listed SMEs, which account for 51% of the market value (versus 28% in the ten-year period 2008-2018). Ranking second in the list is private equity and venture capital sector with 1.84 billion euros of invested capital (taking in consideration just early stage, expansion and replacement deals) accounting for the 22% of the market. Also invoice trading is gaining ground (16% of market value) with 900 companies that have been selling invoices for a total of 580.8 million euros in 18 months (versus 612.2 millions since 2008). Still rather small even if growing faster is the contribution of the crowdfunding (3%) and ICOs (al 2%) to the total figure of alternative capital raised by Italia SMEs, while almost not trackable is direct lending (0.6%).

However this happens because the Milan Politecnico does not include investments by specialized veichles on P2P lending and invoice trading finterch platforms as part of a broader direct lending market. If you include those investments, instead, you reach a fugure that is over 530 million euros in just 10 months from January 1st to October 31st 2018 (see BeBeez Direct lending Report for 10 months in 2018 here).

Coming back to minibonds issues, Politecnico syas that in ten years Itlaian SMEs issuers were 221, of which 36 new issuers coing on the market just this year, for a total ussue value of 3.545 billion euros in ten years distributed on 335 different issues, More than a half of the capita has been raised in the last 18 months: 1.527 billions in 2017 and 313 millions in H1 2018, with an average annual coupon of 5.3% and a 4.9 years average maturity.