Italy’s private equity and venture capital funds top 5.7 bn euros in fundraising in 2021. A new record in investments, but most is due to the Autostrade deal. Here are AIFI-PwC’s 2021 statistics

bycagiant60
in Private Equity, Private equity, venture capital and private debt data in Italy, Venture Capital
A A
Share on FacebookShare on Twitter 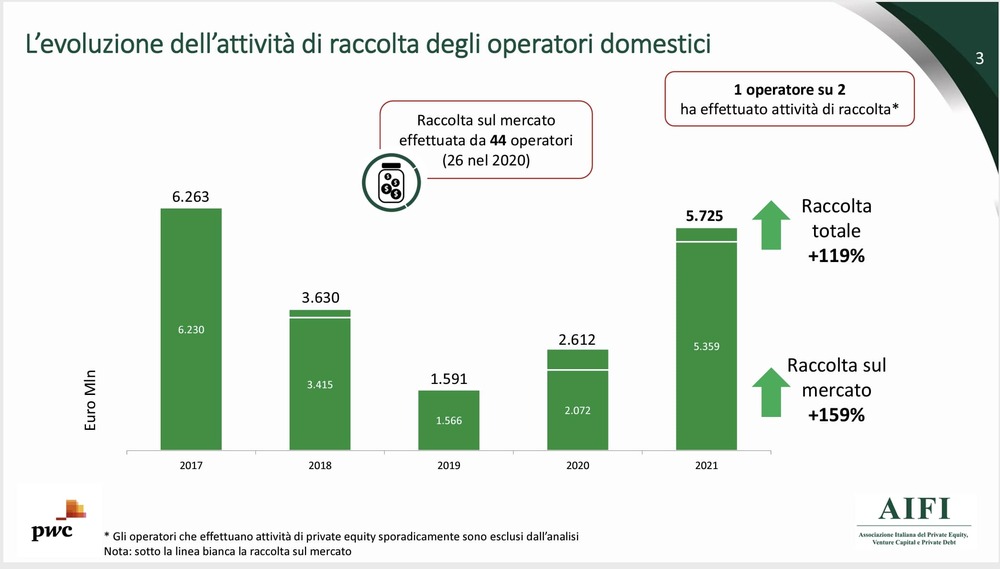 There was a great recovery of private equity and venture capital activities in Italy in 2021 compared to 2020, both on the investment front and on the funding and the divestments side, a trend that was already clear at the end of the first half of the year (see here a previous article by BeBeez). This is what emerges from the analysis made by AIFI (Italian Association of Private Equity, Venture Capital and Private Debt), in collaboration with PwC Italia – Deals, on the Italian risk capital market, presented yesterday in streaming by the AIFI general manager Anna Gervasoni and PWC Deals partner Francesco Giordano (see the press release here and the presentation here). A picture of recovery that had emerged already from the BeBeez Report on Private Equity 2021, published at the beginning of February, and from the BeBeez Report on Venture Capital 2021, published last January (both available to subscribers of BeBeez News Premium and BeBeez Private Data) .

In detail, the AIFI-PwC data indicate for 2021 a total fundraising by Italian private equity and venture capital operators which is almost back to the levels of 2017, at 5.7 billion euros, more than doubled compared to 2020’s 2.6 billions (see here a previous article by BeBeez). Of that amount, 5.4 billion were raised on the market (+ 159% on 2020) while the rest is coming from goverrnmental sources. These are significative numbers that become even more so if you look at the timid trend of previous years (just think that in 2019 fundraising was just 1.5 billion). The result is also due to the fact that as many as 44 operators who carried out fundraising activities on the market in 2021 (compared to 26 the previous year). With reference to the geographical origin of the funds raised on the market, the vast majority come from Italian investors (89%). 26% of the collection derives from pension funds and pension funds, followed by the public sector and institutional funds of funds (15%) and banks (14%). 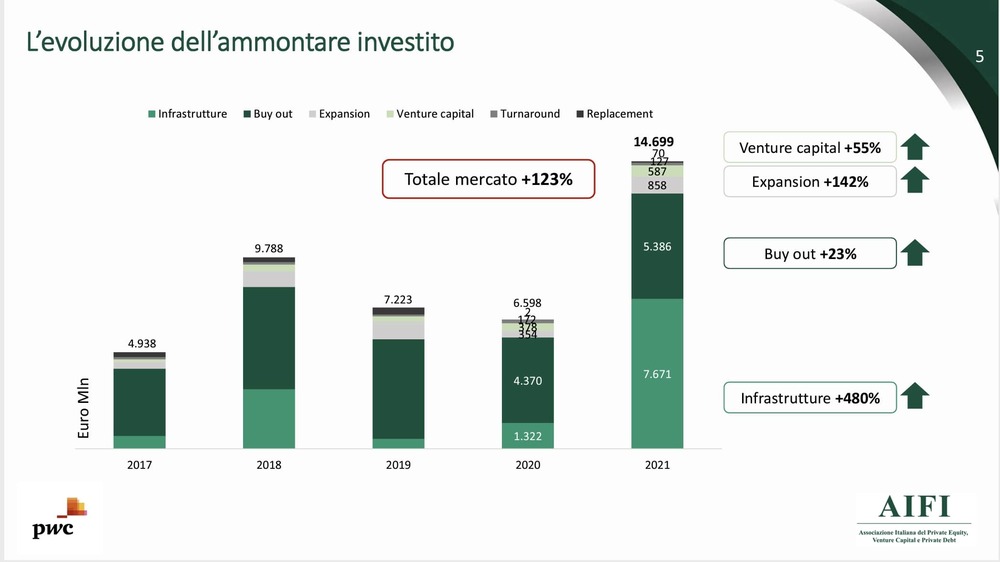 It must be said that the weight of the infrastructures is practically entirely attributable to the Autostrade per l’Italia transaction, of which the consortium composed of Cdp Equity, Macquarie and Blackstone acquired 88% from Atlantia in May last year for an equity value (by 100%) of around 9 billion euros (see here a previous article by BeBeez). More generally, in 2021, 8 transactions were carried out with paid-up equity of between 150 and 300 million euros (large deal) and 8 transactions for an amount exceeding 300 million (mega deals), which together accounted for 67% of the total. ‘total amount invested in the year (9.8 billion). In 2020, 2 large deals and 6 mega deals were made, for an amount equal to 3,463 million euros (53% of the total). Speaking of large transactions, we remind you that the BeBeez Report on Private Equity 2021 mapped 40 private equity deals on Italian companies with an enterprise value of at least 500 million euros for 2021 and where at least 15% changed hands. of the capital of the target companies. Of these, 24 deals involved companies with an EV of at least one billion.

As for the number of private equity and venture capital investment transactions mapped by AIFI-PwC, it grew by 39% to 654, compared to 471 the previous year, driven by venture capital activity, which has been growing in size since 2020. significantly, thanks to the start-up of operations by an institutional entity, focused on investments in companies in the early stages of life.

In terms of the type of operations, activity in the early stage segment (seed, start up and later stage) grew both in terms of number of investments (371, equal to 57% of the total number, + 21% compared to the year previous), both in terms of amount (587 million, + 55%). We recall that as reported by the BeBeez Report on Venture Capital 2021, the reality of venture capital in a broad sense is much broader, with 533 rounds registered for a total of 2.9 billion euros. Buyouts then increased to almost 5.4 billion (+ 23% from just under 4.4 billion in 2020), distributed over 159 operations (94 in 2020, + 69%). As for expansion operations (i.e. the subscriptions of capital increases or convertible bonds), these grew both in terms of amount (858 million, + 142% from 354) and in terms of number (60, + 50% from 40 ). Finally, turnaround deals, the investment in companies in difficulty, maintained a niche role, with only 8 transactions and 127 million euros invested.

At a sectoral level, 2021 saw the ICT sector in first place in terms of number of investments, with 28% of total operations, followed by industrial goods and services, 14%, and medical, 12%. 28% of the number of transactions concerned companies with a high technological content: considering only the early stage sector, this value rises to 38%.

“In difficult years, private equity proved strong by intervening on the market and investing heavily in the real economy. The exceptional results demonstrate the strategic role this asset can play in driving innovation and growth of companies ”,  Innocenzo Cipolletta, chairman of AIFI, said, adding that “the infrastructure sector, in particular, has closed important operations that benefit the whole country. Italy is changing by becoming more connected, not only in digital assets but also in those related to traffic. This is essential to support the development of Italian entrepreneurship and trade”. However, Mr. Cipolletta stressed, “the economic and geopolitical framework, due to inflation, rates and Ukraine, will be very different in 2022. Private capital will also have to make an effort ”.

As for Francesco Giordano, private equity leader of PwC Italia, “the second half of 2021 was effervescent, characterized by very large operations especially in infrastructures, which brought the investments recorded in 2021 to record levels. Italian companies continue to attract the interest of large international operators who increasingly strengthen their presence in Italy and often contribute decisively to the growth of our excellence on global markets”.

Techstars and J.P. Morgan Partner to Invest in Diverse Entrepreneurs