Private capital veichles have more than 9.4 bn euro of dry powder to be invested in italian SMEs 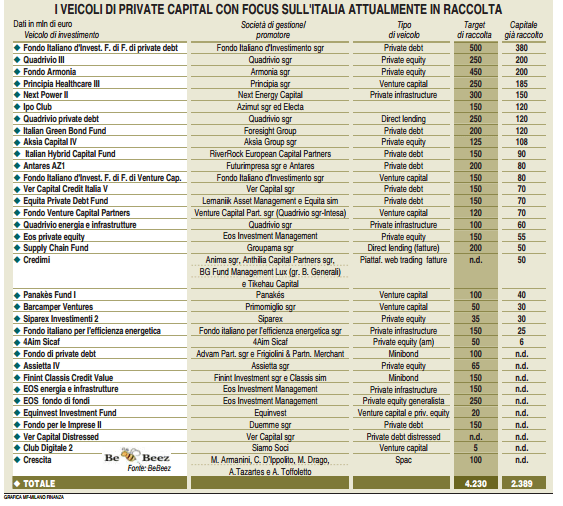 The figure is to be seen as a proxy lower than the real size of dry powder to be invested as this is just a figure coming from adding recent fundraising by private capital funds with a specific focus on Italian SMEs (see funds still in fundraising in the first table and funds that announced final closing in 2016 and late 2015 in the second table). The figure leaves back the portion of international private capital funds who also have Italy in theirs radars and all the open-end investment funds that invest a little portion of their assets in illiquid equity of debt.

Moreover the figure does not include residual committements of Italian private capital veichles raised in previous years and especially about 500 million euros still to be called by the three funds that used to be the unique Fondo Italiano d’Investimento as it was raised in 2010 with a 1.2 billion euros committement and that was split in three funds last Spring (see here a previous post by BeBeez). 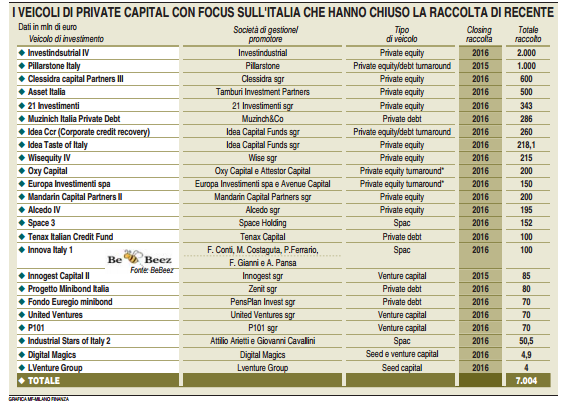 Italian rich private investors (so called high networth individuals) and family offices are more an more keen to invest into real economy both through private capital funds and partecipating in club deals or sometimes subscribing directly ipos on the Aim Italia market, the non-regulated market for Italian SMEs.

All this attention to the real economy by private investors is pushing Italian asset managers and private bankers to add illiquid assets to their proposal to clients in order to offer yields higher than actual negative fixed income markets yields. So see for example what Azimut is doing ad it is in fundraising with Ipo Club, a closed-end-fund aiming to be a 150 million euros feeder fund (it raised 120 million euros already) for a number of new pre-booking companies to be launched in the next few months by Azimut Holding and Electa. Those pre-booking companies will be similiar to Ipo Challenger, a private investment veichle which issued bonds to be converted into ordinary shares of a target company and was structured by Electa in 2014 as well and subscribed by a number of Azimut’clients (see here a previous post by BeBeez). Each pre-booking company will target companies to be listed on the Italian Stock Exchange.

Among asset managers Banca Generali  too launched an alternative product, 3Y Income Coupon, which includes a 15-20% stake to be invested in alternative credit funds managed by credit specialists such as Muzinich, M&G, T. Rowe Price and Jb Asset Management, MF Milano Finanza wrote some days ago.

Finally asset managers are looking at working capital investments too. See for example Groupama sgr (the Italian asset management company subsidiary of the French Groupama group) who launched its new Supply Chain fund, in order to buy invoices from Italian SMEs and that is aiming to raise 200 million euros of which 50 millions have been subscrided by Groupama group itself (see here a previous post by BeBeez). Moreover the invoice trading web platform  Credimi, founded by Ignazio Rocco di Torrepadula, signed an agreement with Anima  sgr, Anthilia Capital Partners sgr, BG Fund Management Lux (Banca Generali ) and Tikehau Capital, who committed 50 million euros by the end of this yeat to buy invoices issued by Italian SMEs and offered on the platform with Credimi which is a co-investor for a 5% stake on each invoice (see here a previous post by BeBeez).