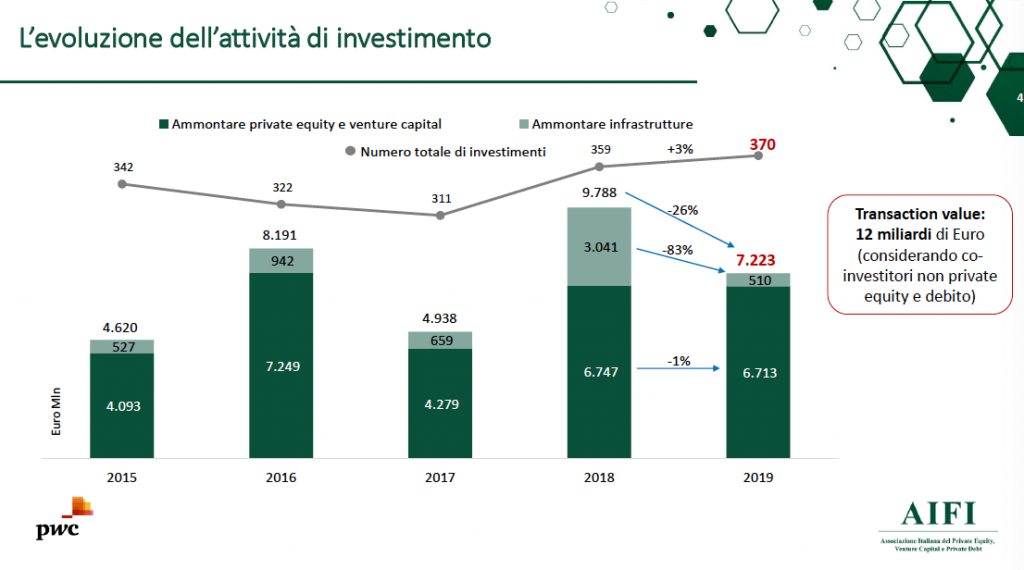 Private equity and venture capital investments fell in 2019 in Italy to only 7.2 billion euros of equity value, against the record figure of 9.8 billions in 2018. This was announced by AIFI, the Association of Private Equity , Venture Capital and Private Debt, presenting the market data processed in collaboration with PwC-Deals, yesterday in a conference call with Innocenzo Cipolletta (AIFI’s chairman), Alessia Muzio (head of AIFI research office) and Francesco Giordano, PwC-Deals partner (see the press release here and the full report here).

Actually there was a great deal of activity from the funds last year in Italy, because 370 investments (in 272 companies) were mapped, compared to 359 in 2018. The collapse in volumes, therefore, is essentially due to the fact that only a few large deal were closed, while most transactions were medium and small size. A trend that had already emerged from the BeBeez Private Equity 2019 Report published last January (available to subscribers to BeBeez News Premium and BeBeez Private Data Combo, find out how to subscribe here).

Fundraising also fell sharply, falling to only 1.59 billion euros (1.566 net of captive funding), clearly down from 3.63 billion (or 3.415 billion) in 2018. Remember, however, that AIFI does not consider Investindustrial‘s fundraising data in its rankings, as it considers it a pan-European operator, although Investinndustrial has a strong Italian soul and Italy (founded by Andrea Bonomi, who is the ) is one of its main investment focuses, together with Spain . Therefore, the 3.75 billion euros raised by Investindustrial’s VII fund last December are not even included in the AIFI fundraising data (see here a previous article by BeBeez).

The latest BeBeez Report on the fundraising of Italian private capital funds (just published, only in Italian today, but there will be an English version tomorrow; available to subscribers to BeBeez News Premium and BeBeez Private Data Combo, find out how to subscribe here), calculates that to date they have a firepower of about 14.2 billion eurows. 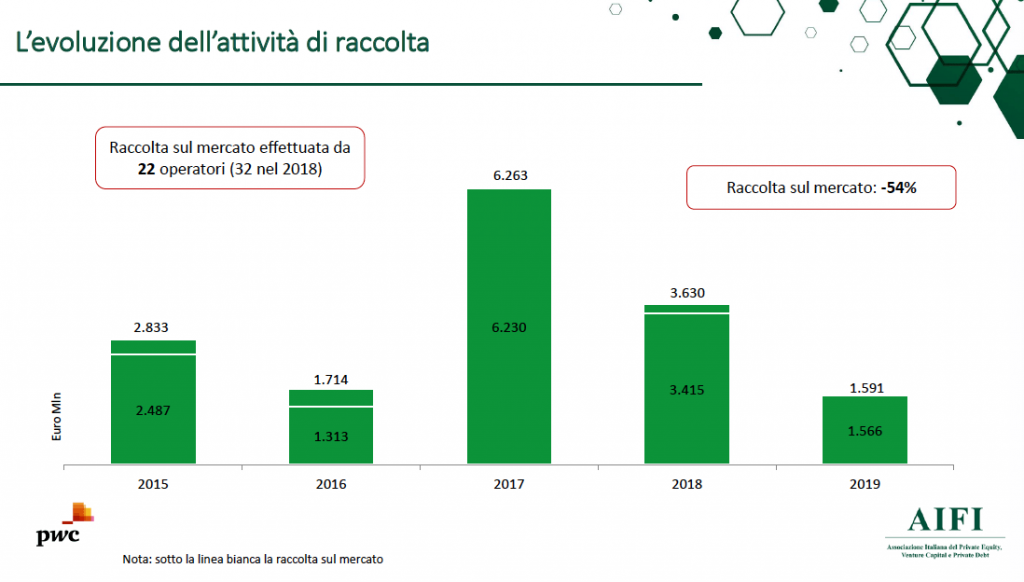 Innocenzo Cipolletta, president of AIFI, speaking of the drop in funding, commented: “There is a lack of important operators and of funds from national funds such as to increase the number and size of Italian operators. In 2019 the only funds of funds operating in Italy were the international ones which, however, find it difficult to find investment conditions suitable for their targets. It is urgent in Italy, as in other European countries, to have a large operator who knows how to channel savings, which remains abundant in our country. Cdp with FII is moving in this direction, but we need more relevant dimensions than those conceived so far ”. 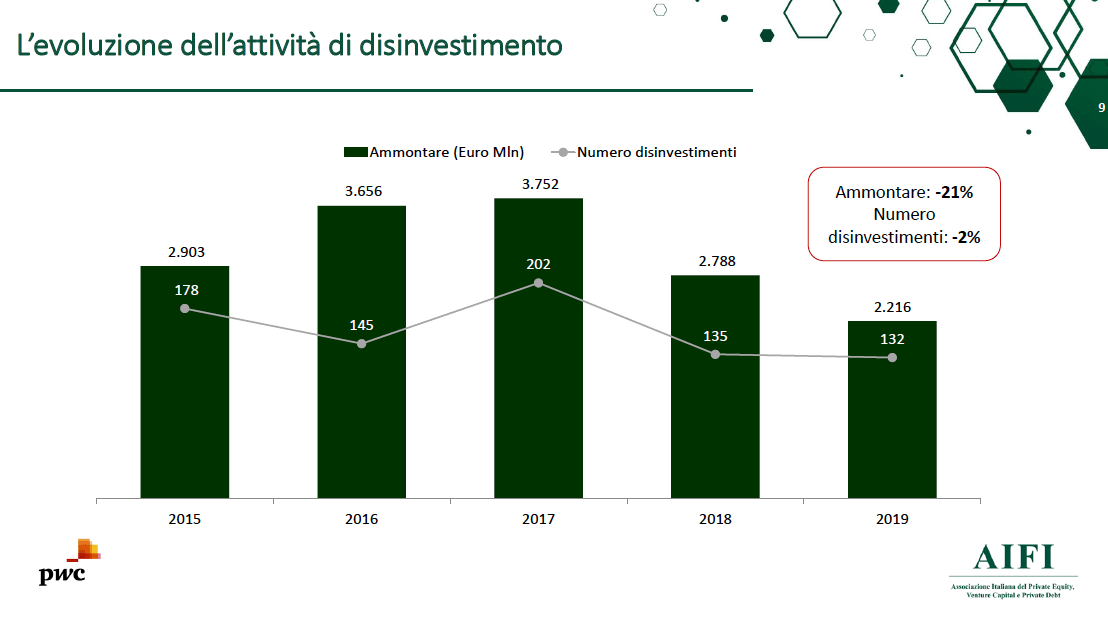 Finally, the divestments were also bad. In 2019, the amount divested at the purchase cost of equity investments was around 2.2 billion, down 21% from 2.8 billion in 2018, while the number of exits was 132, in line with 2018 (135 ). The most used channel for divestments, if we look at the volumes, was the sale to another private equity operator, with 41% of the total divested and 908 million euros. The IPOs exit channel was almost nil, which represented only 6% of the total value of the exits, apart from that of the paytech Nexi, which landed in Piazza Affari in April 2019 and which, according to PwC data, was also the largest IPO of Europe with its collection of over 2 billion euros, against a valuation of 7.5 billions (see here a previous article by BeBeez). 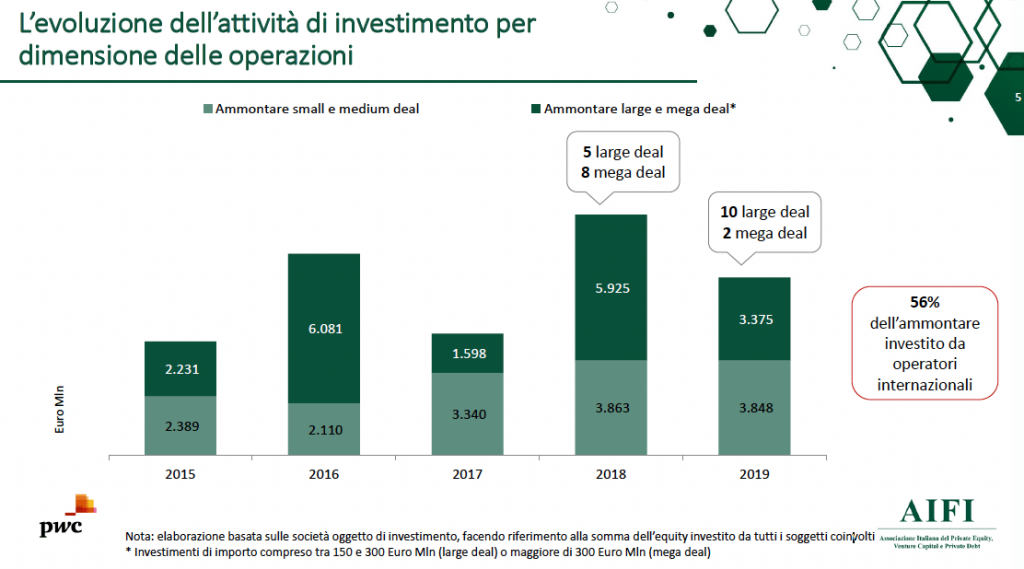 The most important deal of 2019, according to BeBeez Private Data, was the one on DOC Generici. The generic drug manufacturing group has passed entirely under the control of ICG and Mérieux Equity Partners. CVC Capital Partners sold it at a valuation of around 1.1 billion euros. Second place on the podium of the largest deals then goes to Sorgenia, hitherto controlled by Banco BPM, Intesa Sanpaolo, Mps, Ubi Banca and Unicredit, whose agreement was announced just before Christmas for the sale to F2i and Asterion for an estimate of around one billion euros.

Just below it is Forgital, a Vicenza-based company specialized in the production of rings and other large forged components destined for the aerospace, oil & gas and energy sector, sold to Carlyle by the Spezzapria family and by the Italian Investment Fund on the basis of an evaluation of 950 million. Advent International’s early October deal on Industria Chimica Emiliana was also quite important, valued at around 700 million. But CVC Capital Partners’ investment in Multiversity at the beginning of August was certainly no small feat. CVC has in fact bought 50% of Danilo Iervolino’s holding company, owner of the Pegaso and Mercatorum telematic universities, which is said to have been valued at a total of one billion euros. On the other hand, Apollo Global Management’s takeover bid for Gamenet’s shares ended last February, after buying 48.7% of the gaming and betting company from Trilantic Capital Partners, the Chiarva family and Intralot in October 2019 for 189 million.

Returning to the total invested, if we add the portion relating to any co-investors, not classifiable as private equity and venture capital operators, and the financial leverage used for the buy out operations, the total amount stands at over 12 billion of Euro.

On the other hand, it is true that there are more and more private equity investors who are not structured as funds, perhaps because they are investment holding companies, club deal vehicles or SPACs, and this is why AIFI has tried for the first time to calculate the volume of private equity investments in a broad sense that poured into Italian companies during the year. The figure is almost 10 billion euros of equity alone spread over 450 companies. 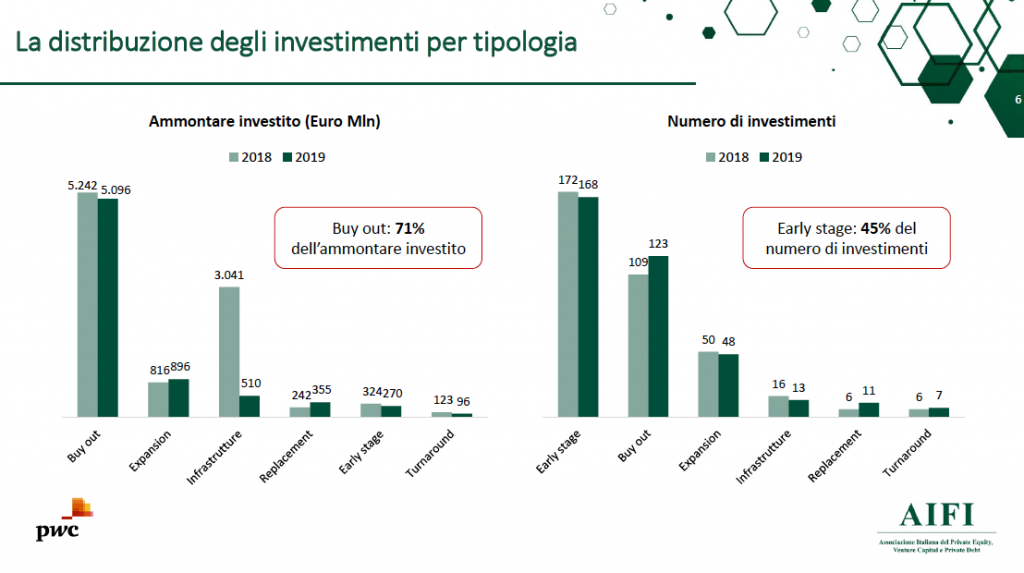 “The current health emergency has taught us the importance of the health system, after hospitals, beds and health personnel have been cut for years. We will have to establish a health system capable of dealing with emergency situations, where the extra jobs do not mean waste, but foresight. In addition, the organization of companies may undergo changes following the application of new ways of working. For this reason, I expect ICT and medical growth in the coming years”, Mr. Cipolletta predicts. 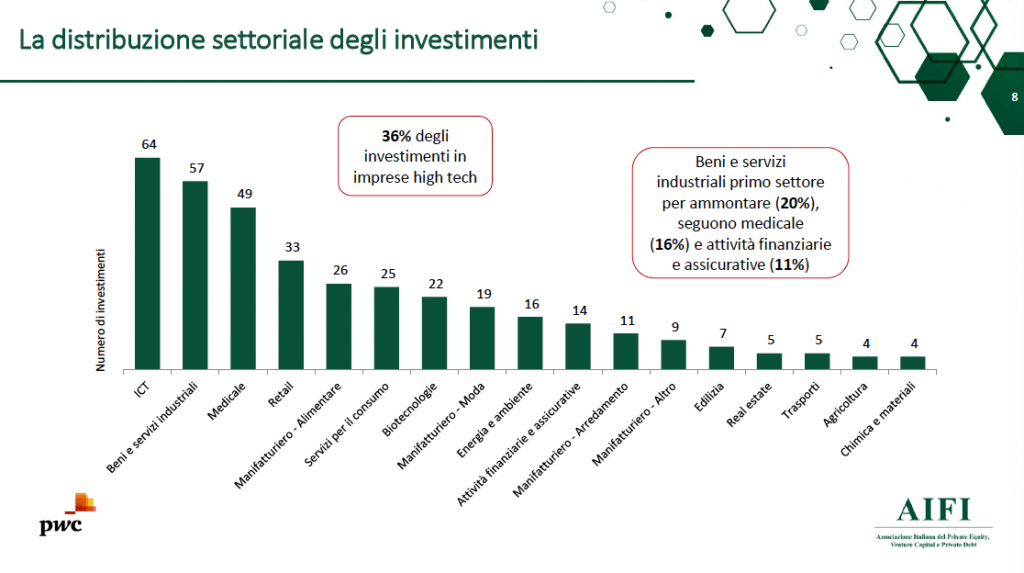 As for this year, in the light of the health emergency triggered by the coronavirus, the AIFI chairman expects a fall in the Italian GDP of around 5% and in any case higher than the one of 2009, which could be followed by a big rebound in 2021 However, companies must be able to take advantage of it: for this reason it is important to guarantee their liquidity and not to irreparably damage our production system. Private equity and venture capital funds are concerned about the situation and are strengthening the liquidity of their subsidiaries, in anticipation of a reduction in their business. “We have few turnaround funds and this will prove to be a handicap in 2021 and 2022, when many Italian companies will have to be relaunched due to the post-Coronavirus economic crisis,” said again Cipolletta. Ands asked about the possibility that the collapses in stock prices arouse appetites of m & a “at closing prices”, the president of Aifi does not consider this danger so important at the moment: “Most of the Italian listed companies are in the hands of controlling shareholders, which it is not convenient to sell their shares at such a low price.