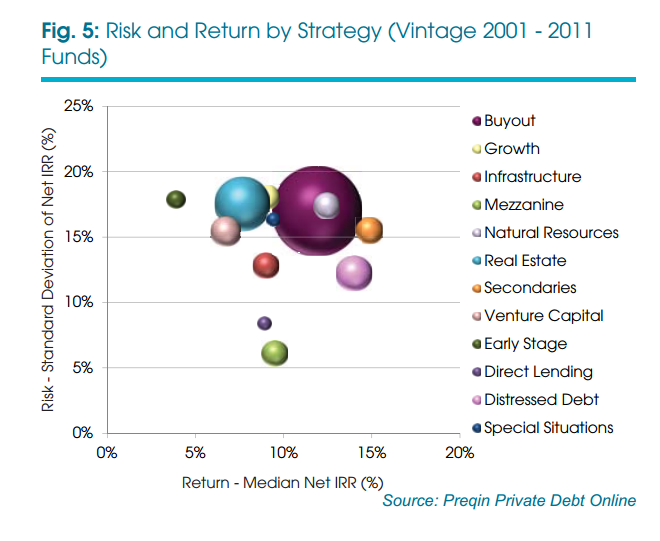 Year 2014 was the strongest one  of private equity investments since the global financial crisis, yet the majority of private equity fund managers are looking to invest more this year. Preqin spoke to 260 firms worldwide in November last year, and 55% claimed they would be investing a higher amount of capital in 2015 compared to last year.

Total assets under management for the alternative assets industry as of June 2014 (the last available figure), up to 6,91 trillion dollars from 6.22 trillions in 2013, with a 690 billion dollars increase since the same period in 2013. Total private equity assets under management stand at 3.8 trillions as of June 2014 (including private real estate and infrastructure funds), up from 3.5 trillions as of June 2013.  In H1 2014 a total of 444 billions was distributed to investors, indicating 2014 is likely to surpass the 561 billions of capital returned to investors throughout the whole of 2013.

As for Irr (Internal Rate of Return), private equity buyout funds continue to raise the largest share of capital when compared to other strategies shown in the chart above, says Preqin (see here the Private Debt Report). However, direct lending funds can be seen to offer significantly lower risk, with the standard deviation of net Irr at 8.4%, less than half the 17% for buyout vehicles. Buyout funds, on average, do offer higher returns with a median Irr of 11.9%; however, direct lending funds on average returned a healthy 8.9%, which when you take into account the far lower standard deviation of returns, may mean that many investors view this as a superior risk-adjusted return proposal.

A similar trend can be seen when considering private debt funds compared to other more established strategies, such as growth funds, special situations, infrastructure and balanced funds. It can be seen from that these strategies are all offering similar return levels; however, in terms of their risk profi les, private debt typically offers a lower standard deviation from median net Irr.

As the direct lending market continues to grow there has been a pronounced drop in mezzanine lending; this is perhaps a result of companies seeking debt capital looking towards a cheaper and less intrusive debt solution, such as unitranche. While returns for both direct lending and mezzanine are not dissimilar, with mezzanine offering a slightly higher median net Irr of 9.5%, perhaps surprisingly, direct lending is shown to still carry the higher degree of risk, as measured by standard deviation of net Irr.

Distressed debt strategies have a well-established market share and offer some of the highest median net Irr returns; however, as is to be expected in a strategy that deals in distressed companies, its risk profi le still remains high, with a 12.2% standard deviation from the median net Irr.