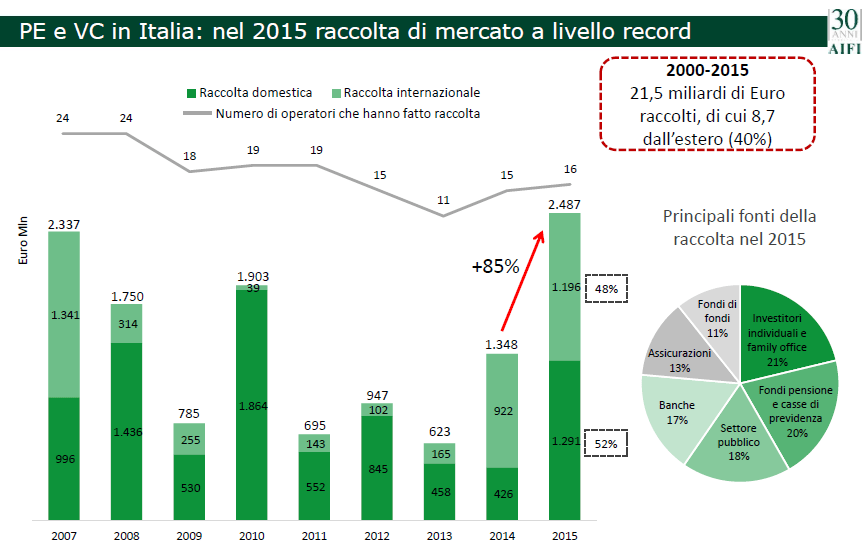 2015 has been quite a year for private equity and venture capital sector activity in italy. Record levels had been reached by funds raised, investments and divestements, the Italian Association for Private Equity, Venture Capital and Private Debt (Aifi) said last Wednesday March 16th (download here Aifi’s report and here a previous post by BeBeez on 2014 data).

Data (processed together with by PwC Transaction Services) were presented by Aifi’s chairman Innocenzo Cipolletta and managing director Anna Gervasoni at a conference in Milan.

Fundraising recorded a big jump last year (+84.5%) with  2.487 billion euros raised from 1.348 billions in 2014, thanks to 16 funds announcing a closing (from 15 funds in 2014). However pension funds and insurance companies still lag behind as investors. 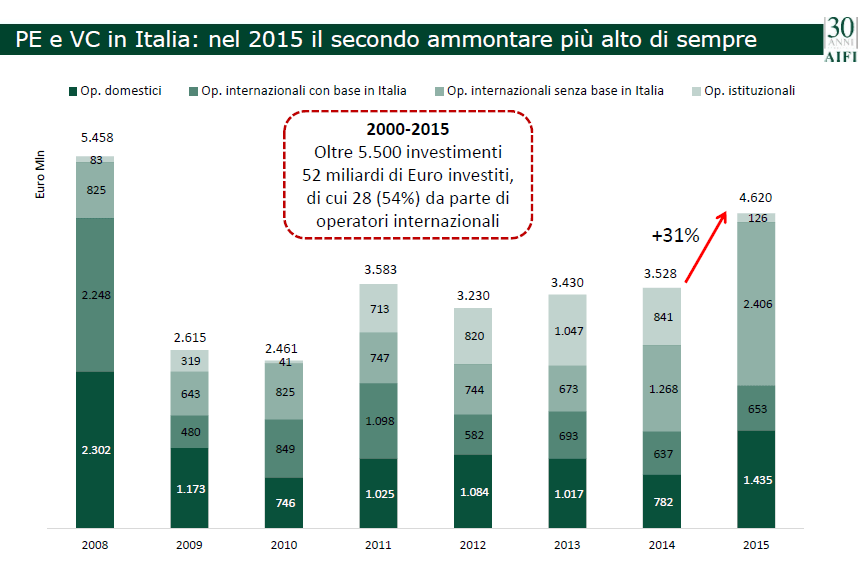 In 30 years private equity and venture capital funds targeting Italy have been raising almost 40 billion euros, of which 21.5 billions concentrated from 2000 to 2015, Aifi said as the Association celebrates its 30th birthday this year. About 8.7 billions or 40% of the total raised in the last 15 years came from international investors and this stake has been growing fast in the last two years.

Even if fundraising is growing well in italy, a comparrison with other EU countries shows that there is still a significant gap to cover on this issue: in the 29 years ending in 2014  funds targeting Spain raised 42 billion euros versus 37 billions raised for Italy, while funds got 65 billions for Germany, 125 billions for France and 338 billions for the United Kingdom.

Finally, on the divestment side private equity and venture capital funds recorded a 10.3% growth in value to 2.9 billion euros (178 deals in line with 2014) above all as secondary buyouts.

CVC sees an European future for DOC Generici. In the meantime the financing structure is to be finalized