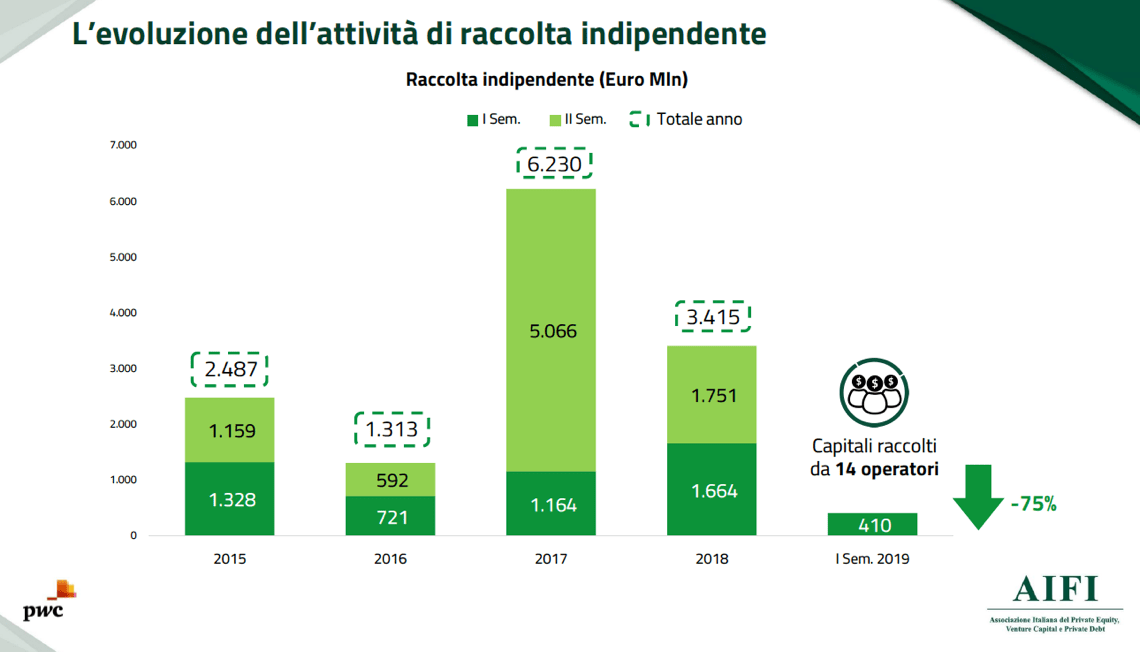 Political and economic uncertainty penalized the private equity market and Italian venture capital, which recorded a collapse in funding and a decline in investments and divestments in H1 2019. This was revealed by Aifi and PwC, which yesterday presented data on the Italian private equity and venture capital market in the first half of 2019 (see here the press release and here the complete presentation). 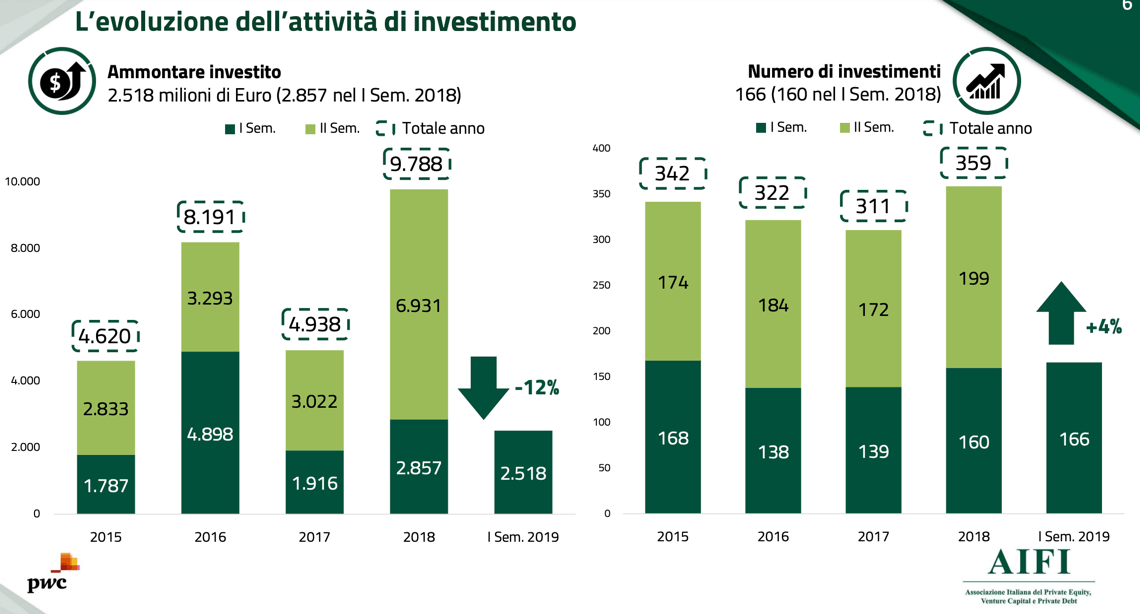 That said, private capital funds (including private debt funds) with a specific focus on Italy between 2018 and the first eight months of 2019 received almost 10 billion euros in commitments from investors. Of this total, 6.9 billions relates to final closings , while 3.1 billions relate to funds that are still in fundraising and which therefore only announced partial subscriptions. The data is contained in the  BeBeez Fundraising Report published last week and available to BeBeez News Premium subscribers (find out here how to subscribe for just 20 euros per month). If the funds in the fundrsing were to achieve all their objectives, then the drypowder ready to pour over unlisted Italian companies would be enriched by at least another 6.4 billion euros, for a total of resources available of almost 16.4 billions. 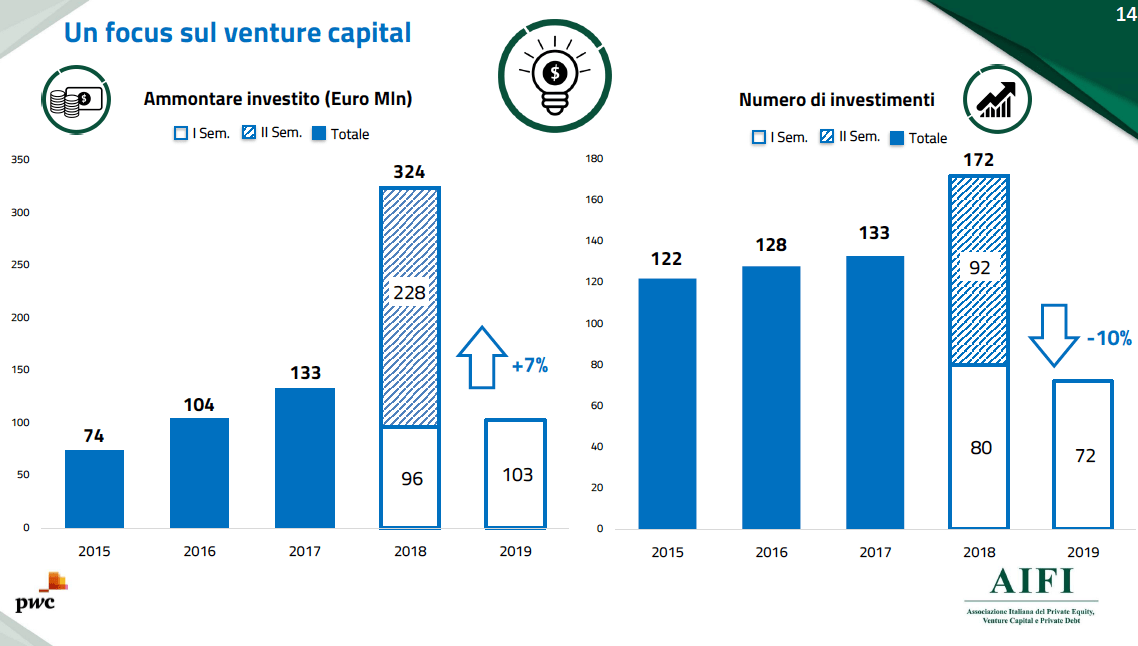 However, the early stage segment (investments in companies in the first phase of life cycle, seed, startup, later stage) grew by 7% in amount (103 million euro) while the number of deals fell by 10%, to 72. The map of Italian startups (or founded by Italian startuppers) compiled by BeBeez, counts for the first half of the year 128 companies backed by venture capital investors (whether they are structured as funds or in a club deal of private investors and business angel, so considering venture capital in a broad sense, compared to the conception of Aifi). Those companies raised a total of just under 280 million euros, including the 23.7 millions raised on equity crowdfunding platforms, excluding real estate transactions. The figure is contained in the BeBeez Six-Month Venture Capital Report published at the beginning of July available for BeBeez News Premium subscribers (find out here how to subscribe for just 20 euros per month).

As for H1 2019 privte equity deals, buyout transactions rose 20% for the amount (1.6 billion) and 34% for number (59 deal), AIFI said. The expansion attracted 271 million euros, up 18% compared to 230 million in the first half of 2018, but with a decrease in the number of operations, -13% to 21 deals. In terms of the size of the companies receiving the investments, those with less than 50 million in turnover (77% of the total) and in the IT sector prevail, which catalysed 20% of the investments. Geographically, 78% of the deals were made in Northern Italy; the Center grows, which accounts for 15% of operations, while those in the South are only 7% of the total. Divestments in this first half of the year were 66, up 12% compared to last year. The most common exit is listing (48% of cases).

In detail, in terms of investments on Italian targets or by Italian private equity portfolio companies, there were 119 deals in H1 2019. The figure comes from the BeBeez Report on six months of private equity published at the beginning of July available for subscribers to BeBeez News Premium (find out here how to subscribe for just 20 euros per month). The figure compares with the 188 transactions that involved Italian companies in 2018. About half (62) of the deals in these first months of the year are direct investments of private equity funds in Italian companies. In the next semester there could be a recovery in the statistics of private equity investments. AIFI has counted that only between July and August another 40 deals have been announced (see BeBeez‘s private equity, venture capital and angels & incubators sections).

Ferretti, Weichai swaps into capital the 212 mln euros shareholders’ loan. The group will see other two capital increases, a 40 mln euro one before ipo and a 100 mln euros one at ipo