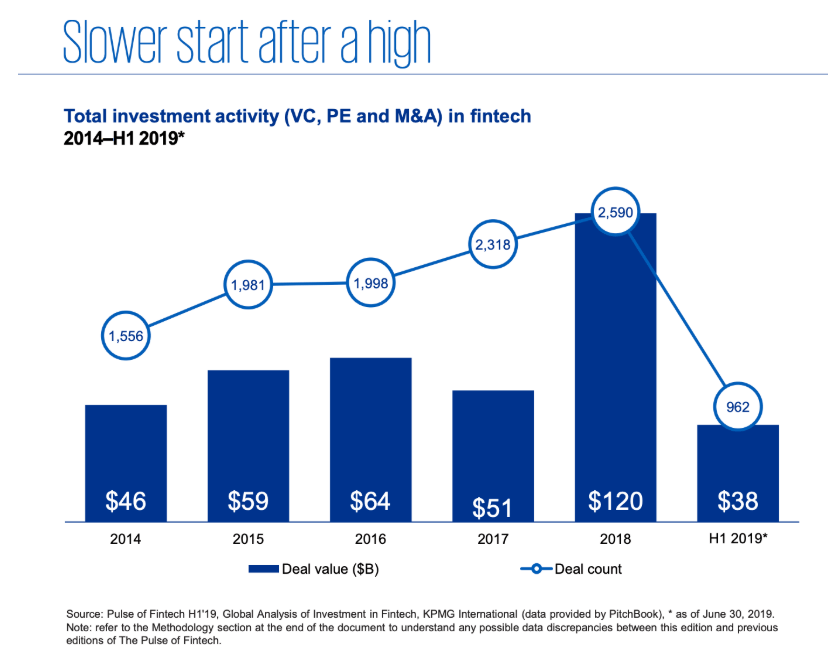 In the first six months of 2019 global fintech companies raised 37.9 billion US Dollars in 962 transactions after in 2018 fintech sector haf attracted funds for 120 billion euros in  2590 deals, said KPMG report The Pulse of Fintech (see here a previous post by BeBeez). However, fintech startups based in Italy or with Italian founders raised 147 million in the first seven months of 2019, while in the whole 2018 attracted investments of 191 million. BeBeez News Premium readers may download the last Italy’s Fintech Report here.  BeBeez Private Data says. Fintech is one of the sectors that BeBeez Private Data monitors. Find out here how to subscribe to Beez Privata Data and BeBeez News Premium 12 months.

Seed Money, an investment vehicle and early-stage startup accelerator that Seed Venture Partners, invested in OffLunch, a food delivery company that raised more than 90k euros (above the 80keuros target) through an equity crowdfunding campaign that is still active on CrowdFundMe (see here a previous post by BeBeez). Seed Money acquired equity and governance rights in the company with a 15k euros investment. Maurizio Pompili founded OffLunch in February 2019. The company has a pre-money evaluation of 1.2 million euros. Moovenda, another food delivery company, owns a controlling stake in OFFLunch and the whole Taac, a Milan-based food delivery startup.

Axieme, an insurtech startup that developed the first Italian social insurance, raised little more than one million euros (see here a previous post by BeBeez). The company received 500k euros from an equity crowdfunding campaign on 200Crowd, a zero rate 10 years loan of 508k euros from the Smart&Start program by Invitalia, and a 120k euros financing from Banco Bpm. Edoardo Monaco is the ceo of Axieme.

Italian real estate developer Immobiliare Percassi signed a partnership with real estate crowdfunding platform Concrete (see here a previous post by BeBeez). Concrete will be the co-financing partner of Percassi until 2021 for projects that require the support of equity crowdfunding campaigns. The companies announced the first campaign for the development project Le Dimore di Via Arena based in the Lombardy city of Bergamo. The project is worth 27 million euros. The campaign has the least target of 0.5 million and aims for 1 million, while investment tickets are of 5,000 euros with an expected IRR of above 10%. The developers may deliver by 2022, however investors can exit earlier with a put option after a holding period of 12 months.

The real estate development project Milano NoLo (North of Loreto) of Lion Immobiliare, raised in 5 hours 1.06 million euros through an equity crowdfunding campaign on Walliance (see here a previous post byBeBeez). The project has a 12 months term and an expected yield of 11.05%. CrowdfundingBuzz database says that since January 2019 Walliance raised 5.37 million (6.94 million in 2018). Giacomo and Gianluca Bertoldi founded the platform.

B2B innovation platform Gellify acquired a minority of IUNGO, a provider of services for supply chain optimization collaboration (see here a previous post by BeBeez). Andrea Tinti is the ceo and founder of IUNGO, a spin-off of Modena and Reggio Emilia University.

Datrix, a provider of big data analysis services for corporate business development, acquired PaperLit, a publisher of Artificial Intelligence software products for content distribution and monetization (see here a previous post by BeBeez). Gionata Mettifogo and Matteo Melani founded Paperlit in 2009 at Menlo Park (California). The company has operative headquartes in Cagliari, Sardinia. In December 2014  AppsBuilder acquired the company and then the two merged in Paperlit. AppsBuilder in turn was founded by Daniele Pelleri and Luigi Giglio and hd previously raised capital from investors such as United Ventures, Zernike Meta Ventures, LVenture and Vertis sgr. In turn, PaperLit, before being acquired by AppsBuilder, had raised capital from Vertis sgr itself. Therefore, the acquisition by Datrix represents an important exit for shareholder funds. In the same note announcing PaperLit acquisition, Fabrizio Milano d’Aragona, the ceo and co-founder of Datrix,  confirmed the intention of the company to raise a new funding round after he had told BeBeez last May that Datrix aims to raise 3-5 million euros (see here a previous post by BeBeez).

Helvetia Venture Fund, the venture capital unit of Swiss Insurance Helvetia, invested in Italian startup MyPass (See here a previous post by BeBeez). Vincenzo Coccoli, coo of MyPass, said that the company would invest these proceeds in expanding its activities in the tourism sector.

Réseau Entreprendre Lombardia (REL), a no-profit company that supports startuppers in the launch of their businesses, signed a partnership with Milan-based co-working company Impact Hub Milano (IHM)(See here a previous post by BeBeez). Marco Nannini is the ceo IHM, while Fabrizio Barini, is the chairman of REL.