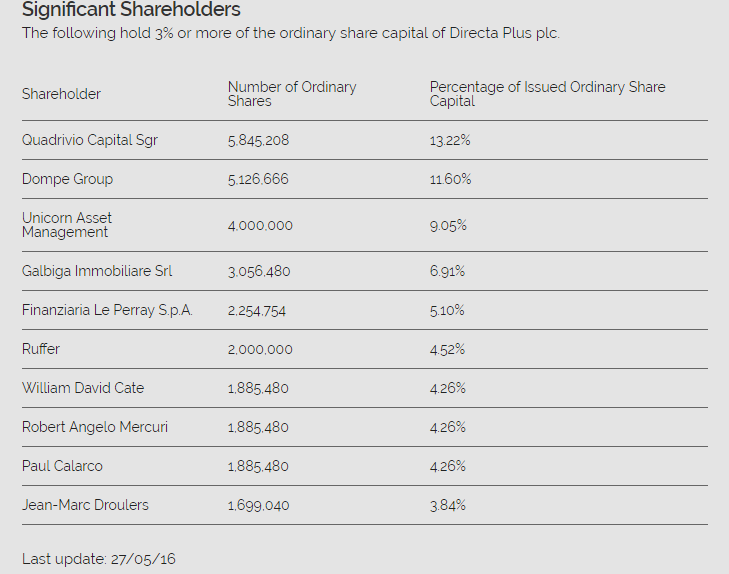 Graphene-based products supplier Directa Plus shares rose by 41% closing at 105.5 pence last Friday May 27th in the first day of trading on Aim London (download here the press release).

The company had announced its intention to listing about ten days ago (see ahere a previous post by BeBeez) and raised 12,8 million pounds in the ipo, after having issued 17,033,334 new ordinary shares at 75 pence per share, so that it started trading with a 33,2 million pounds market capitalization. Directa plus’s stoks closed trading last Friday at 105,5 pence.

After ipo, the total issued and outstanding number of shares is 44,212,827. The floating capital is 34,3% while the percentage of the issued share capital not held in public hands is about 65.7%.

Lead investor (13.22%) is TTVenture (a venture capital fund managed by a Quadrivio sgr and Intesa Sanpaolo joint venture), which has been the major investors since 2009, when also Como Venture and Finanziaria Le Perray had invested. The latter retained a 5.1% stake. In 2015 those investors were joined by Club degli Investitori di Torino, Indaco, Tac Partners and Gruppo Vittoria ina 5.5 million euros funding round. Secondo and third shareholders, respectively, are now the Italia pharmaceutical Dompé Group (11.6%) and Unicorn Asset Management (9.05%).

Directa Plus has been supported by  Cantor-Fitzgerald as Nomad and broker, while DLA Piper was Quadrivio sgr’s  legal advisor.

Founded in 2005 in Usa by its chairman Giulio Cesareo, Directa Plus’s headquarter was then moved to Italy where an hypertechnological plant for graphene production was built inside ComoNext Scientific Park in Lomazzo (Como). The initial strategy was to create a company that was able to produce sustainable nano-materials at a reasonable price using scaleable production process. The final aim was to focus on specific existing markets and in particular ones where their experience in graphite suggested strong market opportunities for graphene.