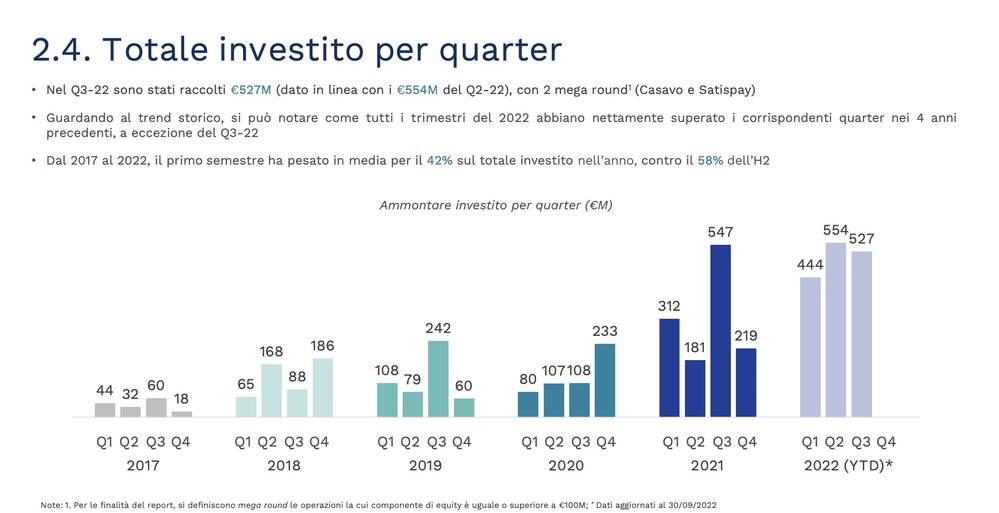 Osservatorio sul Venture Capital in Italia, a think tank that Growth Capital and Italian Tech Alliance launched, said that in 3Q22 the  vc investments in Italy (excluding the venture debt sector) amounted to 527 million euros for 58 rounds, while in 2Q22 they have been of 554 million for 62 rounds and in 1Q22 they were worth 444 million for 77 rounds (see here a previous post by BeBeez). BeBeez data say map instead both equity and venture debt deals (without securitizations) involving startups and scaleups based in Italy or abroad, but with Italian founders. So in Q1 2022 BeBeez had mapped 104 rounds for a total raising of more than 755 million (see here the BeBeez Report on venture capital Q1 2022, available to BeBeez News Premium and BeBeez Private Data subscribers), in Q2 mapped 120 rounds totaling 550 million (see here BeBeez’s Q2 2022 Venture Capital Report), while in Q3 mapped 80 rounds totaling as much as 1 billion euros (see here BeBeez‘s Q3 2022 Venture Capital Report, released last week). As a reminder, in all of 2021 BeBeez mapped nearly 2.9 billion raised, spread over 535 rounds (see here BeBeez‘s Venture Capital 2021 Report).

Brembo, a Milan listed producer of brakes, said it will launch Brembo Ventures, its corporate venture capital (see here a previous post by BeBeez). The fund already acquired a 6.8% of PhotonPath (see here a previous post by BeBeez). The company also attracted the resources of 360 Capital Partners and RoboIT (a vehicle of which CDP Venture Capital is an anchor investor). Douglas Aguiar is the cofounder, ceo and chairman of PhotonPath. In 2020, Brembo acquired a 20% of Infibra Technologies, a producer of integrated phtonic systems that will now be part of Brembo Ventures.

Angelini Industries, an Italian diversified group, will launch Angelini Ventures, an international venture capital with resources of 300 million euros (see here a previous post by BeBeez). The fund will invest in healthcare startups based in Europe, North America and Israel. The vehicle’s portfolio already includes Argobio, a startup studio for the biotech sector based in Paris, Angelini Lumira Biosciences Fund, a North American investor in start ups, and Pretzel Therapeutics, a Boston healthscience startup that also attracted the resources of Eir Ventures and Cambridge Innovation Capital (CIC).

Intesa Sanpaolo Innovation Center and Neva sgr, the bank’s venture capital, launched SEI – Sviluppo Ecosistemi di Innovazione (see here a previous post by BeBeez). The vehicle received 15 million euros from Intesa Sanpaolo Innovation Center ahead of a hard cap of 50 million. SEI is a fund of funds that will invest in incubators, accelerators, startup studios, and investment holdings that will support Italian startups.

Switcho, an app for comparing utility prices, raised 1 million euros from Fondo Rilancio Startup of CDP Venture Capital, Azimut Libera Impresa (see here a previous post by BeBeez). Since its birth, Switcho raised a total of 3.6 million. The company will invest such proceeds in its organic development. In 2020, Switcho generated sales of 0.64 million (+365% yoy).

Exo Lab Italia, a biotech startup, attracted an undisclosed round from Terra Next and other investors (See here a previous post by BeBeez). Stefano Fais, Antonella Logozzi and Lorenzo Cilli founded Exo Lab in 2016.