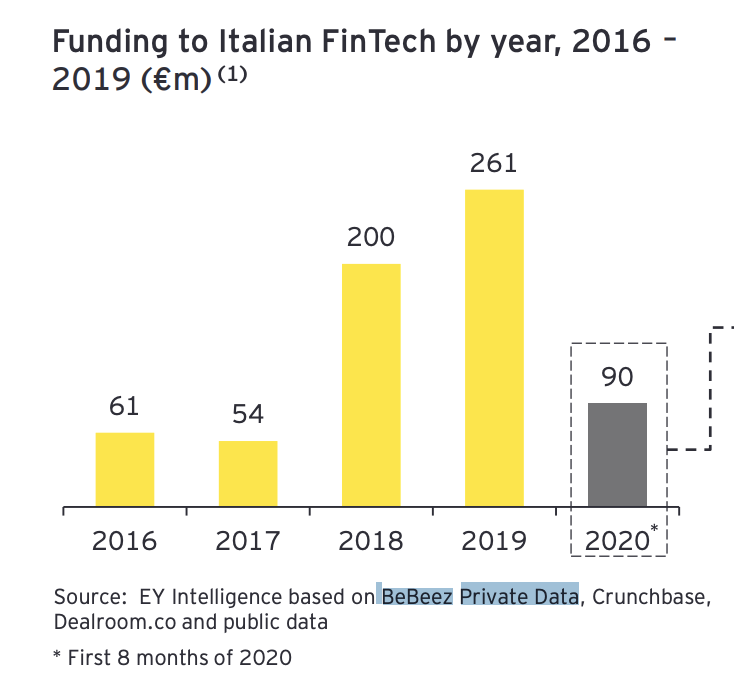 The Italian fintech ecosystem has a big potential for growth despite its current size, EY and Fintech District said during the Italian Insurtech Summit of the Italian Insurtech Association (IIA), which was born earlier in March (see here a previous post by BeBeez). Investments in Italian fintech startups grew at a CAGR of over 60% from 2016 to 2019, which recorded a record figure of 261 million euros versus 200 millions in 2018. Source of EY data for 2019 and 2018 is BeBeez Private Data, the private capital database developed by BeBeez. As for 2020, despite the difficulties recorded on a global scale due to the advent of Covid-19, the Italian fintech ecosystem has shown important signs of resilience, also from the point of view of access to new sources of financing. In particular, the main fundraising activities over the first 8 months of 2020 reached the figure of 90 million euros according to EY. Actually, BeBeez, which recently published the BeBeez Fintech Report as of September 2020 (available in English by tomorrow) mapped from January to mid-September 2020 rounds for a total of over 135 million euros raised by Italian or Italian-founded fintech startups and scaleups. The readers of BeBeez News Premium and subscribers to BeBeez Private Data Combo have access to the BeBeez Reports and Insight Views. Please click here or write to info@edibeez.it for further information about the subscription procedure.

Cdp Venture Capital sgr invested 4 million euros in Hevolus, a disruptive and customer experience innovative startup (see here a previous post by BeBeez). Hevolus was born in 2000 and in 2018 signed a partnership with Microsoft for the mixed reality. Hevolus has sales of 4.2 million euros with an ebitda of 0.279 milion. Hevolus will invest these proceeds in its international expansion and acquisitions.

Italian digital travel company Tramundi closed a 1.5 million euros round that Alberto Genovese, the founder of Facile.it, Prima Assicurazioni, Brumbrum, and other investors subscribed (see here a previous post by BeBeez). Tramundi was born in February 2020. Alessandro Quintarelli is the company’s ceo, Alberto Pirovano the cto, Rodolfo Lironi the coo.

Italian compensation credit circuit In-Lire is going to launch a crowdlisting, an equity crowdfunding campaign and then an IPO on Milan Aim PRO Italia or on Euronext, the company’s founder Romi Fuke said to BeBeez (aee here a previous post by BeBeez). Fuke said that In-Lire aims to launch the equity crowdfunding on WeAreStarting for fundraising 0.5 million euros, while it aims to raise 2 million with the ipo

The corporate venture capital fund of Milan-listed utility A2A invested in Circular Materials, Hades and Siteflow, which are all active in the fields of smart grids and circular economy (aee here a previous post by BeBeez). Andrea Siano, Andrea Campiglio and Marco Bersani founded Milan-based Circular Materials. Siteflow is based in France, while Hades is a Swiss company.

Banca Progetto, a challenger bank whose controlling shareholder is Oaktree Capital Management, signed a partnership with Italian fintech Rating-as-a-Service (RaaS) provider Modefinance (aee here a previous post by BeBeez). The bank aims to improve its pre-screening and analysis activities with the support of the proprietary technology of Modefinance. Valentino Pediroda and Mattia Ciprian founded Modefinance, of which Corvallis has a 43% stake since December 2015.

London fintech Meniga, a company in which Unicredit invested, joined Nexi Open, the ecosystem for open banking of Milan-listed PayTech Nexi (See here a previous post by BeBeez). Asgeir Orn Asgeirsson, Georg Ludviksson and Viggo Asgeirsson founded Meniga in 2009. The company raised 43.9 million US Dollars through 14 rounds since 2013
Endeavor Italia launched Elevator (fka EndeavourX), a scaleup programme that Officine Grandi Riparazioni (OGR) developed with the support of Fondazione Sviluppo, Crescita CRT and EY (see here a previous post by BeBeez). A deeptech startup will have granted the access to the ScienceLab programme of Pariter Partners. Further partnera of the initiative are B Heroes, Intesa Sanpaolo and Nuova Accademia di Belle Arti (NABA) through the collaboration of the students of Professor Massimo Pettiti.