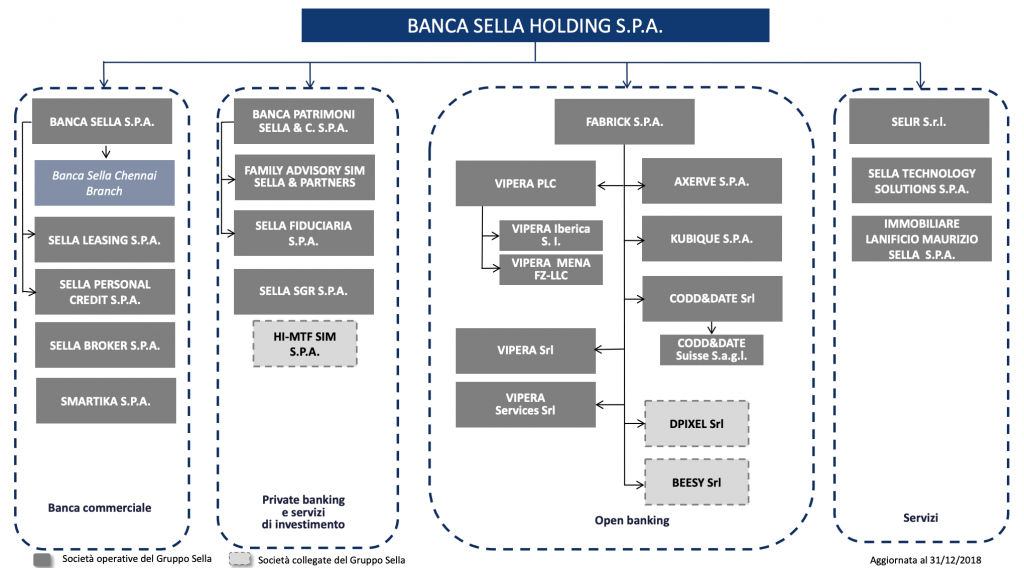 Gruppo Sella launched it venture capital management company  Sella Venture Partners sgr (see here a previous post by BeBeez) after having heavily invested in venture capital for years through a division of the bank called Sella Venture. Pietro Sella, ceo of Banca Sella will chair the company, Grazia Borri and Luca Mannucci, will be the fund’s ceo and cio. Sella Venture Partners will create a fund of international venture capital funds for institutional investors and private banking clients.
FrescoFrigo, the startup that produces vending machines, raised a new round of 1.2 million euros (see here a previous post by BeBeez). The list of investors includes Andrea Dusi, venture capital fund Mega Holding, Futuro Investimenti, Embed Capital, Metrica Ventures, utensils producer Wonder, Italian fridges producer Epta. Tommaso Magnani (chairman) and Enrico Pandian (ceo) founded FrescoFrigo in 2018. The company will invest these resources in its organic development.
Datrix, the artificial intelligence platform for the financial analysis of big data, born from integration between FinScience and 3rd Place, aims to raise 3-5 million euros, ceo Fabrizio Milano D’Aragona said to BeBeez (see here a previous post by BeBeez). The new round will come after the company raised about 2 million euros from private investors and incubator Gellify. Datrix has sales of 4 million euros, but it expects to double this figure as it is finalising the acquisition of a whole company, and 51-55% of another target. Angelo Ovidi joined the company as principal and head of the R&D.
Seasoned Italian banker Gerardo Braggiotti acquired 1.3% of Boost Heroes (see here a previous post by BeBeez). Braggiotti subscribed a capital increase of Boost Heroes of which Italian serial entrepreneurFabio Cannavale holds 19.4%. Enriques Ferrante has 8.4% of Boost Heroes, while Gianfranco Dentella, Gianluca Dettori, and the De Brabant Family hold smaller stakes.
Hdi Assicurazioni made its first committement in aa venture capital fund as it announced investment in Barcamper Ventures (see here a previous post by BeBeez). Barcamper Ventures investment tickets are of at least 25k euros and up to 3 million euros.Targets are mainly Italian companies, but European and US companies as well.
Angels for Women, the first network of business angels that support women led startups that received support from Insurance giant AXA, invested 0.1 million euros in Orange Fiber, a startup that produces eco-friendly fabrics out of citrus fruits (see here a previous post by BeBeez). Patrick Cohen, ceo of Axa Italia, said that the investment in Orange Fiber is consistent with the Insurer policy for women empowerment and eco-friendly investments. Orange Fiber launched a crowdfunding campaign on CrowdFundMe on the ground of a pre-money valuation of 2.7 million and a target of 0.25 – 0.65 million euros.  Adriana Santanocito and Enrica Arena founded Orange Fiber in 2014. In the same year, Francesco Virlinzi, Antonio Perdichizzi, and Corrado Blandini invested 135k euros  in the company.Orange Fiber recently singed partnerships with Salvatore Ferragamo and H&M.
EpiCura, an Italian digital healthcare company, raised to one million euros from previous 800k euros the target for its equity crowdfunding campaign on Mamacrowd (see here a previous post by BeBeez). Lead investors Enrico Castellani, Club degli Investitori, LVenture Group, Club Acceleratori, and BoostHeroes already poured 480k euros. Gianluca Manitto and Alessandro Ambrosio are the ceos and founders of EpiCura. The company will invest the raised resources in its organic development. Epicura started its activity 18 months ago and recorded a monthly growth of 30%.
Italian producer of bio food Pralina srl launched its third round of equity crowdfunding onWeAreStarting platform with a fundraising target of 330k euros (see here a previous post by BeBeez). The campaign will end on 16 May 2019, Thursday, and the minimum investment ticket will be of 250 euros. The company will invest the proceeds in its organic development. The pre-money valuation of Pralina is of 3 million euros, with a 150% growth compared to the figure of 18 months ago, when the company carried on its second round. Lisella Dal Porto is the ceo of the company that has sales of 1.8 million (up 14.5% yoy).

The equity crowdfunding platform Doorway is going to host the campaigns for Vintag, Garanteasy and MySecretCase with a minimum investment ticket of 5,000 euros (see here a previous post by BeBeez). Only qualified investors will be able to pour resources in these campaigns. Doorway will start a roadshow that will begin on 10 May in Bologna in partnership with Unipol Banca. The next stages will be in Rome in partnership with Law Firm Curtis and in Milan with DWF Law Firm. Antonella Grassigli heads Doorway and is a cofounder of Angels for Women, an Italian association of women business angels. In May 2017, Francesca Tonelli founded Vintag, a mobile, social shopping app for vintage items. Carmela Magno founded Garanteasy with Andrea Elestici and other working investors. The company helps to file the warranty documents. MySecretCase is a sex toys e-commerce platform that Norma Rossetti (23.66% owner) launched in 2014. Italian business angels Antonella Grassigli, Federica Lolli, Marco Michelini, and Donato Montanari founded Bologna based Doorway.
Accenture Observatory on Open Innovation analysed 400 agreements that European banks signed with fintech companies, 25% of them involves corporate venture funds, 39% are partnerships, 29% of them consists in the launch of accelerators and proprietary incubators of banks, strategic acquisitions make 7% of such agreements (see here a previous post by BeBeez). In 61% of the agreements there is then the involvement of investments. Mauro Macchi, senior managing director, financial services lead of Accenture, outlined these data on the sidelines of Accenture Fintech Forum: What is Really Working, a panel of Milan FintechStage Festival 2019. The majority of the collaborations of startup fintech with European banks (52%)  takes place in the field of origination, clients acquisitions, and clients relations management, and the technology infrastructure (41%). Goffredo Amodio, Managing Director Banking & Capital Markets at Accenture Strategy, said that financial services companies signed ecosystem partnerships with firms of the leisure and health sector. Accenture invested in startups through its venture capital fund Accenture Ventures.
Tags: AccentureBarcamperBoost HeroesDatrixDoorwayEpiCuraEquity crowdfundingFrescoFrigoOrange FiberPralinaSellaventure capital

NPEs, here are all the deals already announced in 2019 and those coming soon. BeBeez Report