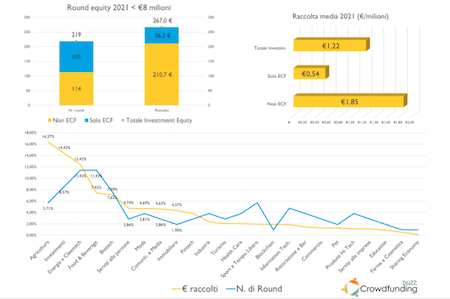 Italian venture capital funds are increasingly using the equity crowdfunding as a fundraising method, said a report of CrowdfundingBuzz, a publication of EdiBeez, the publisher of BeBeez (see here a previous post by BeBeez). The data of CrowdfundingBuzz and of BeBeez Private Data say that between January and end August 20201, venture capital closed 105 out of 219 rounds worth below 8 million euros through equity crowdfunding campaigns and raised 56.3 millions out of 267 millions. Crowdfunding is one of the sectors that BeBeez Private Data monitors. Find out here how to subscribe to the Combo Version that includes the reports and the insight views of BeBeez News Premium 12 months for 110 euros per month.

Scalapay, an Italian fintech scaleup that developed a proprietary Buy Now Pay Later (BNPL) solution for paying three interest-free instalments, raised a series A round of 155 million US Dollars on the ground of an enterprise value of 700 millions (see here a previous post by BeBeez). The company attracted the resources of Tiger Global, Woodson Capital, Baleen Capital, Fasanara Capital, and Ithaca Investments. Simone Mancini, Johnny Mitrevski, Raffaele Terrone, Mirco Mattevi, and Daniele Tessari founded Scalapay in 2019 and since then raised 203 million.

Cdp Venture Capital sgr launched Fondo Corporate Partners (FCP), a corporate venture capital vehicle for investing in Italy’s innovative startups and SMEs (see here a previous post by BeBeez). Cdp Equity and the Italian Ministry for the Economic Development (MED) poured 180 million euros in the fund which aims to raise a total of 400 million by year end. FCP will invest 100 million in each of the following sectors: IndustryTech, EnergyTech, ServiceTech, and InfraTech. The fund already obtains committments for a total of 57 million euros for its IndustryTech sector by Italian automotive components maker Adler Group and by steel producer Marcegaglia. Marino Giocondi, Laura Scaramella, Carlotta Orlando, Gregorio Rodriguez d’Acri, and Jacopo Volpi are the directors of the fund.

Milan-listed Exor appointed Diego Piacentini as its advisor and  also appointed him as chairman of Exor Seeds, its venture capital arm (see here a previous post by BeBeez). Piacentini is a non-executive director of The Economist Group and senior advisor to KKR for the TMT sector. Exor Seeds in the last few days also followed its previous investment in Indian used cars marketplace Cars24, joining its new investment round led by DST Asia, Alpha Wave Incubation e Tencent. Moreover, Exor Seeds also joined a 50 million US dollars round raised by Israeli’s IT Quantum Machines and led by Red Dot Capital Partners led (see here a previous post by BeBeez).

ARisk, an Italian developer of algorithms for the risk management, helped to set an international benchmark for the exchange of data between machines and Artificial Intelligence systems for the assessment of corporate default risks in five years (see here a previous post by BeBeez). MPAI (Moving Picture, Audio and Data Coding by Artificial Intelligence), an international no profit association for the compression of artificial intelligence-based data, branded the standard metric for risk assessment as MPAI-CUI (Compression and Understanding of Industrial Data). A team of researchers of Turin Polytechnic University that Guido Perboli headed developed the MPAI-CUI metric together with ARisk, of which Mr. Perboli is head of R&D. ARisk was founded in 2017 by Valeria Lazzaroli (chief risk officer), Beppe di Sisto, Vittorio Pizzorno in 2017 and then joined both as shareholder and chairman by Giuseppe Vegas, former Italy’s markets Supervision Authority, Consob. The startup cashed in a 350k euros seed round last February by a group of Italian well known managers coming from the finance sector.

Italy’s Orapesce, a digital platform for the home delivery of fish and sea food, closed the equity crowdfunding campaign that launched earlier in July on Mamacrowd and raised 1.15 million euros, including 600k euros from ALIcrowd, an Eltif venture capital of Milan-listed Azimut (see here a previous post by BeBeez). Orapesce has a pre-money value of 6 million euros, and set a fundraising target of 0.6 – 1.5 million. The company has a turnover of 0.65 million.

The Italian chain of fresh pasta restaurants miscusi will open a shop in Covent Garden, a London’s iconic location (see here a previous post by BeBeez). Alberto Cartasegna, is the ceo and founder miscusi with Filippo Mottolese in 2017, when they attracted one million euros from Alexander Samwer. In November 2018, the company raised 5 million from MIP (Milano Investment Partners) and Picus Capital. Earlier in June, miscusi raised 20 million from MIP and Kitchen Fund.

Paris-listed investment holding Innovative-RFK (i-RFK) closed the placement of its charity bond on Milan-listed portal CrowdFundMe (see here a previous post by BeBeez). The holding raised 0.530 million euros. Banca Valsabbina invested 0.3 million. The top end of the fundraising target was of 5 million. The bond of i-RFK is due to mature in 60 months, has an annual yield of 4% with a bullet repayment plan with a deferred biannual coupon. The company will annually devote 2% of the raised resources to charity projects of Lions Club International. Modefinance assigned a mid-high rating of B1 to i-RFK which will invest the raised proceeds in startups operating in the sectors of healthcare tech, cyber security, teleaudiology, gaming, Artificial Intelligence. The holding already found 5 targets and by early 2022 it aims to invest 4.2 million through the subscription of capital increases.