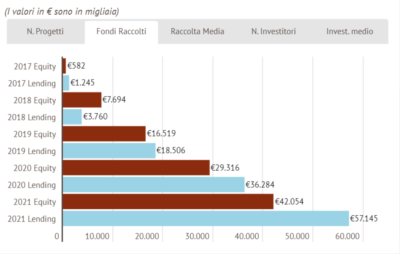 Italian new space scaleup D-Orbit issued a two-classes convertible bond for a total of 100 million euros ahead of a business combination with a Spac or a sale to a private equity fund (see here a previous post by BeBeez). The bond is due to mature on 30 April 2026 and pays a fixed rate of 8% and attracted the resources of United Ventures (10 millions), M&F Fund (5 millions), Advent portfolio company Cobham (5 millions), Asher Aerospace Venture (1 million), and other investors. If D-Orbit will merge with a Spac, the bonds will automatically become shares. If the company will sell a stake to a private equity fund, the bondholders will decide whether or not convert the company’s debt in shares. Luca Rossettini and Renato Panesi founded D-Orbit in 2011.

Italian fintech lending platform Credimi attracted 5.6 million euros from Vertis (1.8 million), Merloni Holding (in the region of one million), United Ventures (0.62 million), and the founder Ignazio Rocco di Torrepadula (in the region of 0.5 million) (See here a previous post by BeBeez). Sources said to BeBeez that Credimi carried on such an investment round for adjusting its equity ratio consistently with the 400 million loans it issued (see also here the January – August 2021 BeBeez Report about Italian fintech available for the subscribers to BeBeez News Premium and BeBeez Private Data). The same sources told BeBeez that Credimi is preparing a much bigger capital increase worth 80-100 million euros, to be launched in the next few months.

SkinLabo, an Italian digital brand for cosmetics, attracted 6 million euros from 8A+ Investimenti (3 millions) and the current investors in the company (see here a previous post by BeBeez). Sources said to BeBeez that investors poured resources in Skinlabo on the ground of an enterprise value 50% higher than the figure on whose ground attracted the previous round. Angelo Muratore founded SkinLabo who aims to generate sales of 100 million by 2025.

Sealence, the Italian startup that developed the proprietary electric jet DeepSpeed, aims to list on Nasdaq in 2023 through a business combination with a Spac (see here a previous post by BeBeez). However, Sealance aims to raise further investment rounds in 2022. William Gobbo founded Sealence whose equity is worth 15.4.

Davide Turco, the ceo of Indaco Venture Partners sgr, said to BeBeez that the firm aims to launch a new investment vehicle in the first half of 2022, while the current fund is close to acquiring a foreign cybersecurity company (see here a previous post by BeBeez). Turco explained that the fund will carry on follow-ons for the startups of its portfolio. Indaco Ventures belongs to its managers (51% – Turco, exec vp Elizabeth Robinson, investment directors Antonella Beltrame and Alvise Bonivento), Futura Invest (a vehicle of Fondazione Cariplo, Intesa Sanpaolo and Fondazione Enasarco 24.5%) and Intesa Sanpaolo (24.5%).  Indaco raised 134 million euros ahead of a target of 200 million (hard cap of 250 million) from Fondo Italiano d’Investimento, Intesa Sanpaolo and Fondazione Cariplo.

In 2021, the startups in the portfolio of I3P, the incubator of Turin Polytechnic University, raised more than 37 million euros (see here a previous post by BeBeez). I3P created or invested in 52 new firms, divested 4 assets and supported 22 startups for incubation.

OCS, a provider of IT services and software for the financial sector firms that belongs to Charme, acquired Redo from its founder and ceo Diego Mortillaro (see here a previous post by BeBeez). Redo supplies microlans below 500 euros. OCS has sales of 27.2 million euros, an ebitda of 18 million and net profits of 16.8 million.

Singapore’s TradeFlow, a trade finance fintech that belongs to London-based scaleup Supply@Me Capital, founded by Italian entrepreneur Alessandro Zamboni, signed an escrow transaction in the commodity sector with Baltic Exchange, the provider of Baltic Index which gives information about the global markets of shipping and warves (See here a previous post by BeBeez). TradeFlow and Baltic Exchange agreed for a shipment of agricoltural commodities from India to China.