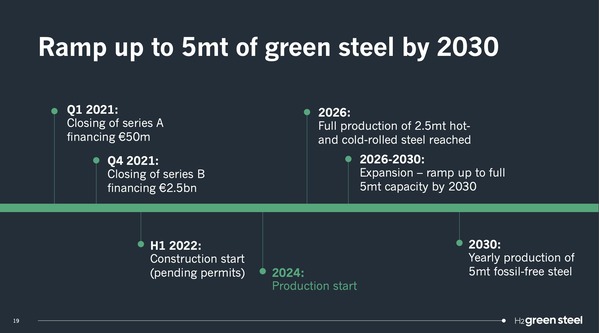 Exor, the financial holding of the Agnelli-Elkann Family, and MarcegagliaGroup joined the Series A round of 105 million US Dollars that Swedish launched (see here a previous post by BeBeez). The company also attracted the resources of Altor Fund V, Ane & Robert Maersk Uggla, Bilstein Group, EIT InnoEnergy, FAM, IMAS Foundation (part of IKEA), Kingspan, Mercedes-Benz, Scania, SMS Group, Stena Metall Finans, Cristina Stenbeck, Daniel Ek, and investment holding Vargas. H2GS aims to raise up to 2.5 billion euros through a series B round in the next 12 months (1.75 billion from a green project finance facility and the remaining part in equity).

Riello Investimenti Partners sgr, till now  a private equity and private debt firm, entered in the venture capital business and launched the fund Linfa Ventures that will focus on the agri-food business and aims to raise 80 million euros (see here a previous post by BeBeez). Linfa aims to allocate 80% of its resources in Italy but could also invest in the Usa and Israel. Riello Investimenti is still in fundraising for Italian Strategy Private Equity. Sources said to BeBeez that the fund attracted commitments of 75 million ahead of a target of 150 millions (see here a previous article by BeBeez). Riello Investimenti is also still in fundraising for its second private debt fund  Impresa Italia II, launched in July 2020 with again a 150 million euros target (see here a previous article by BeBeez).

Cdp Venture Capital sgr, through its  Fondo di Technology Transfer Fund, invested 40 million euros in RoboIT, an Italian pole for the robotics technology transfer (see here a previous post by BeBeez). Agreements are already being finalized with some institutional bodies and other companies, which will add to the investment already allocated in RoboIT by Cdp Venture Capital and other specialized funds, with an estimated overall leverage effect of over 100 million euros in 4 years, which is expected to create more than 50 new companies.

The Naples-based real estate lending crowdfunding platform Isicrowd based started its activities for supporting projects in the South of Italy, CrowdfundingBuzz (a publication of EdiBeez, the publisher of BeBeez, see here a previous post by BeBeez). Antonio Ottaiano founded the platform and aims to extend the business to the tourism sector. Buyer Group, a real estate company, is the partner of Isicrowd. See here the Crowdfunding Buzz data about the Italian real estate crowdfunding.

Nano-Tech, an Italian producer of high performance materials, aims to raise up to 5 million euros through the issuance of 380,000 new shares at a price of 13.21 euros each a capital increase that will end on 31 December 2021 (see here a previous post by BeBeez). Private investors already poured one million in the business. Nano-Tech will raise part of the resources through an equity crowdfunding campaign on BacktoWork.

Sources said to BeBeez that AorticLab raised 1.4 million euros from a family office of pharmaceutical entrepreneurs (0.3 million), AV-Venture (part of Italian Angels for Growth) and the crowd investors of Doorway (0.4 million) (see here a previous post by BeBeez). AorticLab raised more than 13 million since its foundation.

Dog Heroes, an Italian producer of healthy food for dogs, raised 0.65 million euros from an equity crowdfunding campaign on Mamacrowd and 350k euros from funds and private investors (see here a previous post by BeBeez). Pierluigi Consolandi, Marco Laganà and Gregoire Desforges founded Dog Heroes in 2019 and in May 2020 they received a pre-seed facility of 0.4 million from a pool of business angels. The company launched an equity crowdfunding on the ground of a pre-money value of 4 milion.

Fercam Fine Art (FFA), part of the Italian logistic company Fercam, signed an agreement with Art Rights, a subsidiary of Art Backers, for supplying online services for the transportation of art items at low prices (see here a previous post by BeBeez). Andrea Concas (ceo) founded Art Backers which since its foundation raised one million euros from CDP Venture Capital and other investors.

The Milan-based real estate project via Monti Sabini raised 1.2 million euros through an equity crowdfunding campaign on Walliance (see here a previous post by BeBeez). The investors will get an annual gross Roi of 12.55%.

Banca Etica invested 250k euros in the fintech SardexPay, an Italian network for exchanging goods and services through a system of credits (see here a previous post by BeBeez). Earlier in April, SardexPay launched an equity crowdfunding campaign on BacktoWork for raising 0.6 – 2.5 million on the ground of a pre-money value of 17.5 million (2.4 million of them out of the earlier conversion of a bond that the shareholders carried on). Sardex raised 1.1 million from 220 investors and will invest the raised proceeds in its tech development (49%), multichannel marketing (36%) and the recruitment of new professionals (15%). Carlo Mancosu, Gabriele and Giuseppe Littera founded Sardex in 2010 together with Franco Contu. Piero Sanna joined the company in 2011. Carlo Mannoni and Marco De Guzzis are the company’s chairman and ceo.