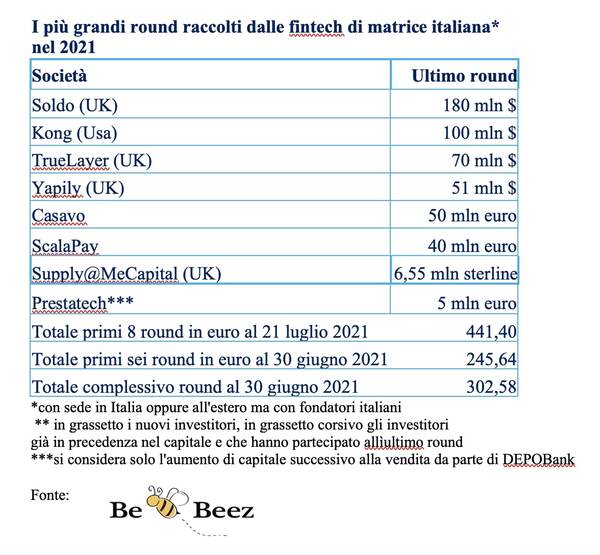 Italian or Italian-founded fintech startups and scaleups raised 32 rounds in the first six months of 2021 for a total of almost 307 million euros raised, after venture capital investments in the sector had been 247 millions throughout 2020 spread over 35 rounds, 261 millions in 2019 and 200 millions in 2018. This emerges fromt the last Fintech Report H1 2021 by BeBeez (available to BeBeez News Premium and BeBeez Private Data subscribers).

Banca AideXa, an Italian fintech scaleup which raised 48 million euros from investors last year, will turn the statements of its clients in structured data-sets grate to a partnership it signed with Prestatech, an APIs scaleup that was bought back from DEPOBank by its founders a few weeks ago thanks to support of some investors. Prestatech  will provide the firm with parsing services (see here a previous post by BeBeez).

Operators and market Authorities met last week on the occasion of the presentation of the sixth report drawn up by the Observatory on Crowdinvesting of the School of Management of the Milan Polytechnic, led by Giancarlo Giudici and spoke about the new EU regulation 2020/1503 by the European Parliament on equity crowdfunding and lending platforms that will come into force next November 10th, after having obtained the definitive go-ahead from the EU Parliament in October 2020 (see here a previous article by BeBeez). The study by the Milan Polytechnic Observatory said that crowdfunding in Italy has raised a totale of 953.4 million euros since the market began, considering just the equity crowdfunding and social lending platforms. Of this figure, 503.7 million have been raised in the last 12 months alone (see here a previous article by BeBeez).

Luxembourg’s Azimut Investments, part of Milan-listed Azimut, received from CSSF, the local stock market authority, the authorization to invest in cryptocurrencies and virtual assets like DeFi token (See here a previous post by BeBeez). The company now aims to launch AZ RAIF Digital Assets, a fund for professional investors that will target cryptocurrencies, digital assets, ETFs, fintech or blockchain-linked firms. Giorgio Medda is the co-ceo and global head of asset management of Azimut.

Orapesce, a digital platform for purchasing and delivering fish, attracted 600k euros from ALIcrowd, a venture capital Eltif of Azimut that also targets companies that are raising funds through crowd campaigns (see here a previous post by BeBeez). Orapesce launched its second campaign on Mamacrowd and already raised 0.773 million, above the 0.6 million target on the ground of a pre-money values of 6 million. The company currently aims to raise up to 1.5 million. Orapesce will invest the raised proceeds in the launch of its “ready to eat” products and its organic development. Azimut launched ALICrowd Eltif earlier in March. The vehicle has a tenure of 8 years and resources of 25 million.

V-Nova, a London-based scaleup founded by Italian entrepreneurs Guido Meardi e Pierdavide Marcolongo, that has a proprietary technology for the compression of video and pictures files, raised 33 million euros (se here a previous post by BeBeez). The company attracted 5 million from Neva (fka Neva Finventures). The list of investors also includes the Federico & Elvia Faggin Foundation. Guido Meardi and Pierdavide Marcolongo founded V-Nova in 2011. Neva decided to invest in the company in light of its ESG approach.

Italian pharma company Biogenera launched an equity crowdfunding campaign on Milan-listed CrowdFundMe ahead of an Ipo on Euronext (See here a previous post by BeBeez). The company set a target of 0.2 – 2.5 million euros on the ground of an enterprise value of 70 million and will invest the raised proceeds in its listing and organic development.

We Make Market, an Italian e-commerce portal for craftmanship items, launched an equity crowdfunding  on Milan-listed CrowdFundMe for raising 0.2 – 0.5 million euros on the ground of an enterprise value of 1.65 million (See here a previous post by BeBeez). The company attracted the resources of Enrico Pandian.  Alberto Lacagnina and Alberto Ansaldo founded WMM in early 2021. The company will invest the raised proceeds in its organic development.

Yobs Technologies, a California-based provider of HR services, raised 2 million euros of seed resources for an enterprise value of 10 million euros (See here a previous post by BeBeez). The company attracted the resources of Adam Grant, Lucy Guo and Kat Orekhova. Raphael Danilo and Federico Dubini founded the company in 2020 with the incubation support of I3P, part of Politecnico di Torino.

Italian platform for booking medical check-ups Dottori.it acquired 50.1% of Appocrate, a provider of digital solutions for health care companies, from Bizonweb, a web agency that belongs to Marco Fogazzi (ceo) and Michele Maltese who will keep their operative roles together with the cofounder Silvia Stefana (See here a previous post by BeBeez). Dottori.it was born in 2013. Silvio Pagliani founded it together with other entrepreneurs. Dottori.it has sales of 3.5 million euros (+35% from 2019) and aims to generate revenues of 5 million in 2021.

Tozzi Green, a renewable energy company, invested in the project of IUV aimed at reducing the use of plastic for packging and at producing films out of agricultural waste (See here a previous post by BeBeez). Cosimo Maria Palopoli founded IUV in 2019. Tozzi Green has sales of 88.3 million euros with an ebitda of 45 million

Yocabè, a provider of marketing and sales services, already raised more than 1.4 million euros through its equity crowdfunding on Mamacrowd, well above the target of 0.5 – 1.2 million (See here a previous post by BeBeez). ALIcrowd, a venture capital Eltif of Azimut that also targets companies that are raising funds through crowd campaigns, committed for investing one million on the ground of a pre-money value of 8 million. Vito Perrone, Lorenzo Ciglioni and Andrea Mariotti founded Yocabè in 2016.

Italian crowdfunding portal ClubDealOnline (CDO) signed a partnership with Prometeia, a provider of risk and wealth management services (See here a previous post by BeBeez). The companies that will launch their fundraising campaigns on CDO will receive an ESG audit from Prometeia.