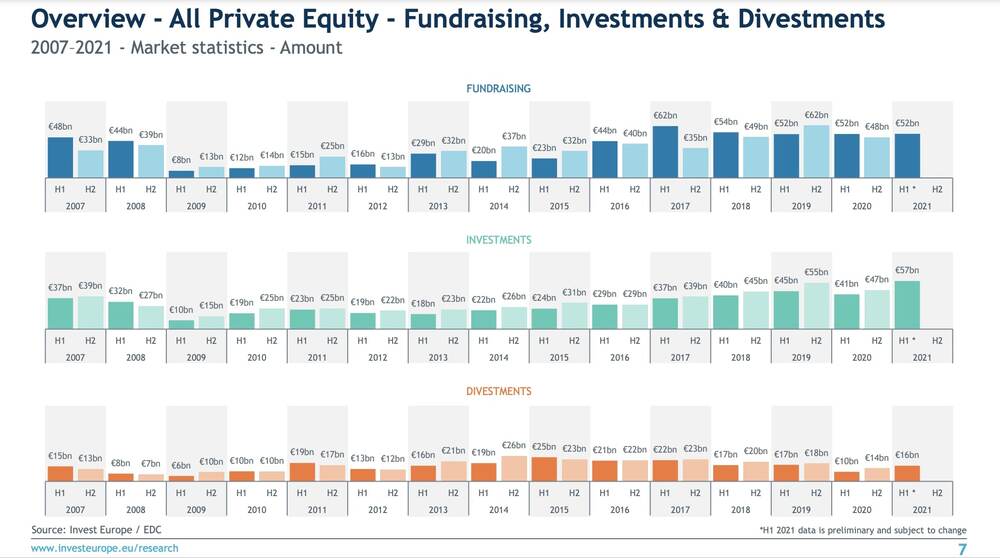 In 1H21, Europe’s private equity and venture capital funds invested 57.3 billion euros (41 billion in 1H20 and 47 billion in 2H20), said a report of InvestEurope, the European association of private equity and venture capital, which has been mapping the market since the late 1990s, but considering only the activity of funds based in Europe and therefore excluding from the count of investments those conducted in Europe from funds with a non-European basis (see here a previous post by BeBeez). The growth in investments was driven by the activity of venture capital funds which alone invested 10.2 billion euros in the six months, with an increase of 58% compared to the previous half-year record recorded in the second half of 2020. Investments by specialized growth funds also performed well, doubling volumes to 17.5 billions, in turn marking an all-time high for the six months. The whole year 2020 had seen fundraising for a total of 101 billion euros, down from the record of 114 billions in 2019, but well above the 48 billions in 2000, the first year for which data are available, and above all the minimums at 27-28 billions a year recorded between 2002 and 2004, after the burst of the internet bubble. Investments, on the other hand, stood at 86 billions in 2020, down from the historic highs of 108 billions in 2019, but well above the 35 billions in 2000 and above all the figures below 30 billions recorded between 2002 and 2004. In reality, however, the size of the private equity market in Europe is much larger, if we consider the investment activity of all private equity funds, regardless of their country of residence. In fact, Pitchbook has calculated that all types of private equity funds in Europe in the first six months of 2021 announced 3,824 deals, a figure almost equal to that of the whole of 2020, while in terms of value, the total of transactions was attested to 342.2 billion euros, equal to 81.5% of the total for the entire year 2020 (see here a previous article by BeBeez). We recall that 2020 had recorded 3971 private equity deals, for an amount of 419.7 billion euros, a slight decrease in volumes and value compared to 2019 (see here a previous article by BeBeez).

Oltre Impact sgr achieved 53 million euros  for the first closing of its Oltre III fund ahead of a fundraising target of 100 millions by 2022 (see here a previous post by BeBeez).The fund attracted the resources of CDP, the European Investment Fund (EIF), who poured 30 million, and other investors. Oltre’s founding partners Luciano Balbo and Lorenzo Allevi appointed Nicola Lambert and Raffaele Fedele as junior partners.

Italian fintech projects attract more resources from investors, said a biennial report of Banca d’Italia that surveyed the operators of the banking system (see here a previous post by BeBeez). In 2021-2022, the expenses for the fintech sector amounted to 530 million euros (456 million in the previous two-year period).

Banca d’Italia, Consob and IVASS set the application window for joining the regulatory sandbox for Italian fintech firms between 15 November, Monday, and 15 January 2022 (see here a previous post by BeBeez). The sandbox will allow the successful applicants to experimenting with innovative solutions under a simplified transitional regime and in constant dialogue with the sectoral authorities.

Italian fintech firm Satispay and cryptocurrencies exchange Young Platform signed a partnership for facilitating the bitcoin trading(see here a previous post by BeBeez). Young Platform users will have the possibility to top up their wallet through Satispay. Andrea Ferrero is the ceo and cofounder of Young Platform. Satispay is one of the scaleups that BeBeez Private Data monitors. Find out here how to subscribe to the Combo Version that includes the reports and the insight views of BeBeez News Premium 12 months for 110 euros per month.

Cdp launched Tech4Planet, a tech transfer national pole for the sustainability sector, together with the Polytechnic Universities of Milan, Turin and Bari (see here a previous post by BeBeez). Cdp allocated 55 million euros for the project to leverage a further 130 million in 4 years.

On 22 November Monday, Italian food order and delivery startup Alfonsino listed on Euronext Growth Milan at 1.6 euros per share (see here a previous post by BeBeez). Alfonsino placed 2.5 million shares through a capital increase and raised 4 million euros while receiving orders for 7.5 million from institutional investors that will obtain free warrants. The company’s pre-money value is 16 million for a market capitalization of 20 million and a 20% publicly traded equity.

ITS Lending, an Italian lending crowdfunding platform with a focus on small towns, started its activities (see here a previous post by BeBeez). Investors will receive yield of 6% and 12% on the invested capital.